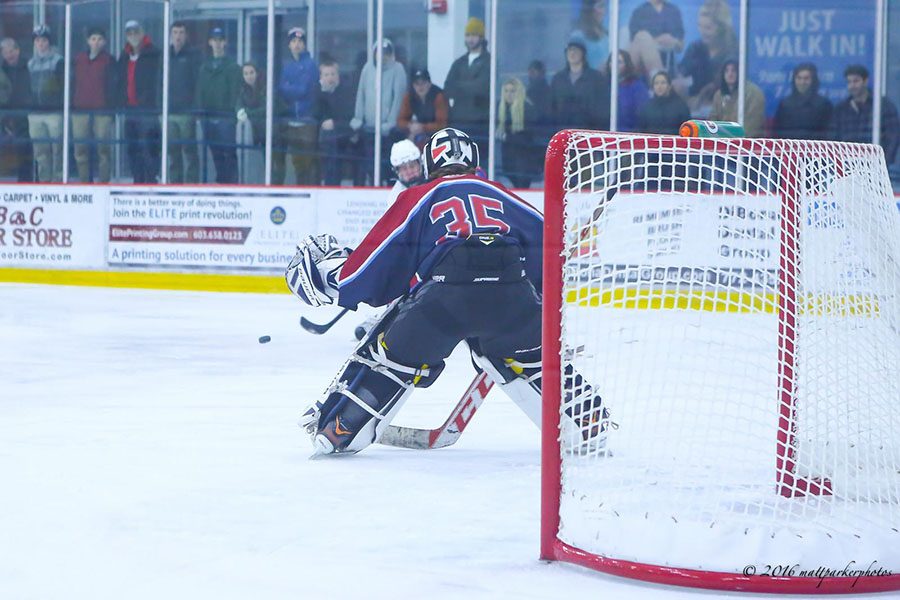 Patrick MacDonald '18 in goal for HBDS

The Hollis Brookline Derryfield Ice Hockey team is close to beginning a very promising season. With a big move from Division II to Division III, the athletes are excited to hopefully win more games than during the 2015 season.

Patrick MacDonald ‘18, is very excited and had a lot of positive things to say when asked about the upcoming season. “Playing down in Division III will allow us more of an opportunity to win with schools more on our level. This year, for the better of the team, I am going to play forward as well as spend sometime in the net,” said MacDonald.

The team is also facing a large shift in numbers. Last season the team only had 10 rostered players, but in pre-season workouts this year the team recorded over 25 players that have signed up to play on the team. A strong number of players is going to allow for the starters to get more of a break in between shifts. Breaks mean that the players will be fully charged. Fully charged players means more effort they will give and when effort is given, teams make plays and plays mean opportunities to win.

Once again HBDS has another great change. Their home ice rink, where the team plays and practices, was moved from Cyclones Arena in Hudson to Conway Arena in Nashua, which is very close to home. “This move is going to hopefully create a better fan base and allow more people to come out and cheer us on. The atmosphere while we are playing really sets the tone and pace of the game,” said Andrew Nordstrom ‘20.

The season is going to be very promising, but time will tell as the winter season is almost upon us.