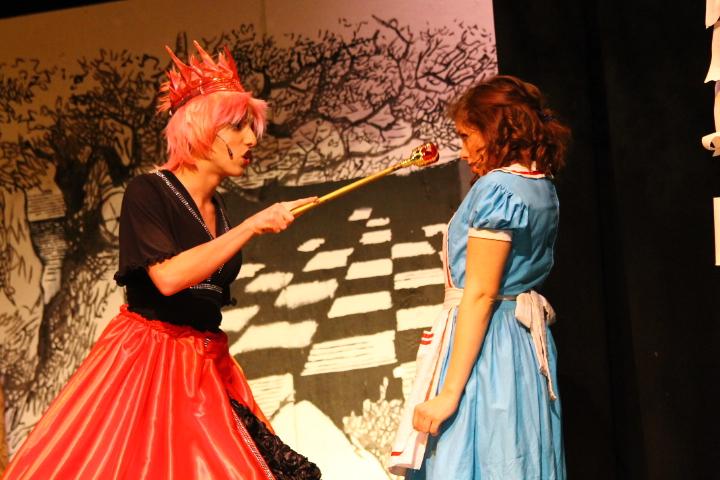 “‘Twas brilling, and the slithy toves did gyre and gimble in the wabe…”

These are some of the words that transported Alice and her audience back into Wonderland during this weekend’s three performances of the original play Alice Through the Glass, adapted by co-director and social studies teacher Gregory Parker.

In this production, Alice, as played by Caroline Kroeger ‘17, is now in her twenties and has found wild success with a kids’ TV show based off her adventures in Wonderland. However, she is faced with a dilemma: she has lost her creativity. While at an appointment with her therapist, Alice is whisked back to the land where it all began—and from where she must find her way out.

Attendance on opening night broke the department’s record for that of a fall play, which was previously held by last year’s performance of You Can’t Take It With You. Over 160 theatre-goers flocked to Alice this weekend, and for good reason.

With the help of a creative set and masterful light and sound effects, the actors kept their audience transfixed throughout the entire show. Standout performances came from Aaron Velez ‘17 and Jess Putney ‘20. Velez charmed as the sly Cheshire Cat, controlling the puppet through an all-black morph suit. Putney provided amazing comic relief with his portrayal of a demanding, extravagant Red Queen.

The biggest crowd-pleaser can undoubtedly be awarded to junior Joey Schunemann’s scene as Humpty Dumpty. Schunemann sat his face, painted and bald-capped to look like an egg, on a small wall and on top of a baby doll’s body. The horrifyingly hilarious illusion kept the audience in stitches as his deep-voiced dialogue was paired with the comic movements of tiny arms and legs.

Folks at the Saturday matinee had even more fun when HB’s SRO Rick Bergeron had his head shaved during intermission. The makeover was done by a group of middle school students who contributed the highest donation to Bergeron’s efforts to fundraise for the Multiple Myeloma Research Foundation.