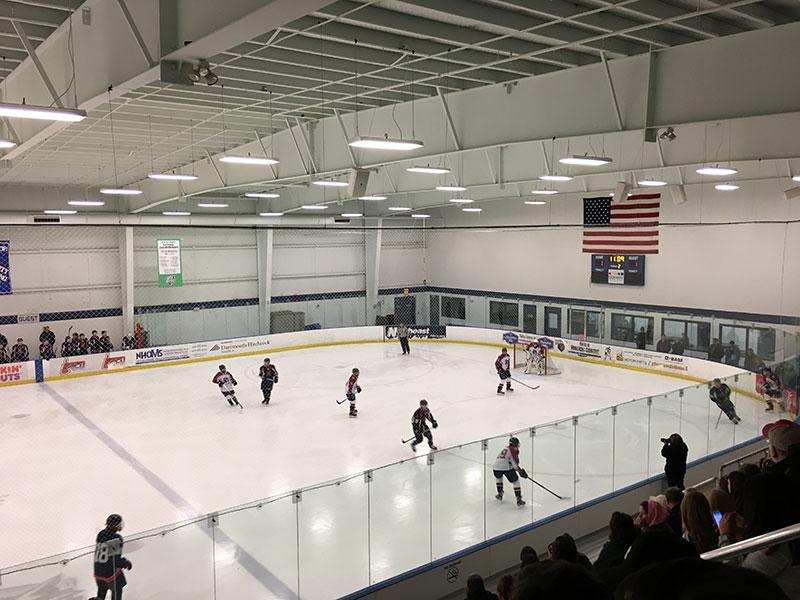 Pressure put on HBDS defense early in the second period.

On Wednesday night, the Hollis Brookline-Derryfield School hockey team held their season opener at Conway Arena against the Conval-Conant Griffins. This was not just the team’s first game of the season, but also their first game ever in Division III after a long season last year in Division II.

Much like Hollis Brookline’s team two years ago, Conval merged their hockey program with the Conant Orioles over the offseason. Joint teams are not uncommon in Division III; after this latest merger all but three teams are made up of combined rosters.

The Warriors were instantly off to a good start by winning possession off the opening face off. They applied pressure early on by firing some shots on goal. With five minutes left to play in the first period Conval had a breakaway opportunity that was spoiled by goalie Pat MacDonald ‘18 to keep the game scoreless. Conval was the first to score with 1:15 remaining in the first.
They could not hold the lead for long, as the Warriors scored their first of the season when Derryfield defenseman Connor Glosner ‘18 put one in with 34 seconds left on the clock in the first period.

HBDS got off to a rocky start in the second period when Bryce Newsham ‘17 found himself in the penalty box for tripping to prompt a Griffins power play. They failed to capitalize, however, and the Warriors escaped without any damage done. Then with 7:30 remaining in the period Conval had another breakaway opportunity, and this time they scored. Once again, the home team had answered when Nick Dapolito ‘20 netted his first career high school goal. With two periods of play in the books the contest was tied at two goals apiece.

Like they had been doing all night, Conval was the first to score in the third period. It came as no surprise when the HBDS Warriors once more had a response. With 7 minutes left in regulation it was Dapolito ‘20 once again. Undoubtedly the most impressive goal of the night, Dapolito ‘20 skated up the right side of the ice and snuck the puck in between the goalies foot and the near post of the goal. There didn’t seem to be much of an angle, but he must have seen the hole. With seconds left in regulation and a tied score of 3-3, the Warriors took one final shot on goal that was knocked down by a sliding Conval defenseman.

It is standard practice in NHIAA hockey to end the games with a tie due to ice time complications, but since they had leftover time the two coaches agreed to play six minutes of overtime, first team to score wins. Conval came out of the gate hot, but Macdonald ‘18 made some saves to keep HBDS’ hopes alive. Eventually, the Griffins got one past him. Final score HBDS 3, Conval 4.

Despite the heartbreaking loss, there are reasons to believe that the Hollis Brookline-Derryfield Warriors have a bright future ahead.