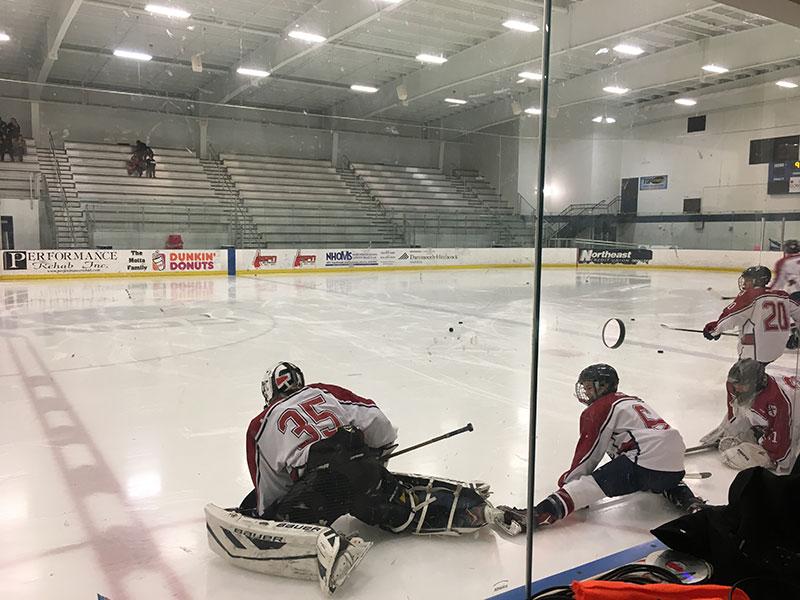 Pat MacDonald '18 and Nick Dapolito '20 stretch before the game.

On Friday, December 23, HBDS Warriors hockey lost to the John Stark-Hopkinton Hawks by a score of 4-1 in their second game of the season. This was the expected outcome, as Stark-Hopkinton won their season opener 9-3, and the Warriors were missing a couple key players due to holiday break complications. Nevertheless, it was a much better game than the three-score differential suggests.

The opposition tried their best to get an early lead in the first period, but nothing was getting by goalie Pat MacDonald ‘18. Part of the reason for all of the shots on goal was the absence of HBDS’ star defenseman Connor Glosner of Derryfield. Either way, the first period came to a close with the score tied at 0-0.

A ways into the second, John Stark-Hopkinton had a power play, but couldn’t capitalize. MacDonald could not hold them off forever, however, and it wasn’t until there was 3:46 left in the period when Stark scored to pull ahead 1-0. Soon after, Derryfield senior Stewart Arend tied it up with a slapshot from just inside (hockey term for midcourt). With seconds remaining, however, the Eagles took the lead back.

At the start of the third period, HBDS was down two goals to one. A few minutes in, John Stark-Hopkinton scored their third goal to extend the lead. With 6:00 left to play, the Warriors had a rare opportunity to score when two Stark players got themselves in the penalty box to prompt at five on three power play. They failed to capitalize and did not score. John Stark-Hopkinton scored once more with 2:30 left in the game to set the final score at 4-1.

The HBDS Warriors are still in search of that highly-coveted win. This past game was much closer than the 4-1 score suggests. The boys are playing great hockey so far. It should be everybody’s New year’s resolution to go and catch a game before the season is over.