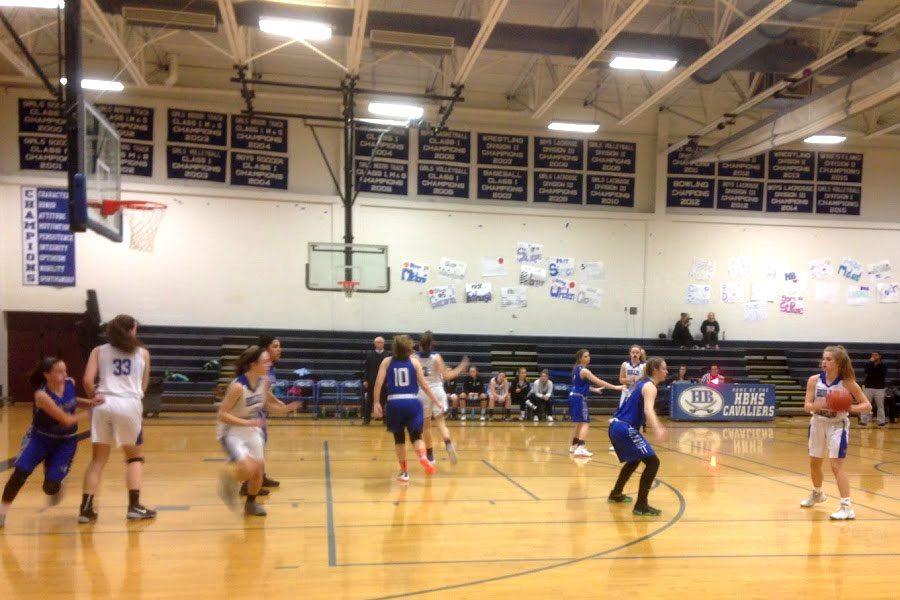 HB setting up a play on offense.

The Hollis Brookline Cavaliers faced off against the Manchester West Blue Knights in women’s basketball at HB on Friday. Holding a 7-1 record and riding a six-game win streak, the Cavs were rolling and looking to pick up another win against West, who held a 3-3 record and was coming off of back-to-back losses. Both teams gave reason to expect a win; HB looked to continue their streak, while West was due for a win after two losses.

Starting for the Cavaliers was Joanna Balsamo ‘18, Cassandra Stapelfeld ‘17, Kenzie Day ‘17, Brodie Kelley ‘19, and Elizabeth Atkinson ‘19. Hollis Brookline drew the first points of the game, setting the tone for the first quarter. With good ball movement on offense and smart defensive play, HB built up a lead quickly featuring multiple scores from Kelley and Stapelfeld. They continued this style of play throughout the quarter, which eventually wore down the Manchester defense and drew fouls. This strong play by HB led to a 14-4 lead by the end of the first quarter.

The second quarter started off with lots of missed shots and defensive rebounds on both sides. Nothing would fall for either team until a layup by West started off the quarter’s scoring. HB responded in their next possession, however, with a three-pointer from Stapelfeld, then another from Day. Scoring continued to be slow in the quarter until when about two minutes remained. Drives to the hoop from West and three point shots from HB got both teams rolling again. After an aggressive final two minutes of play, the half closed out 29-16, with HB still leading.

HB wasted no time getting the second half started. A quick layup from Day, followed by scores from Stapelfeld and Atkinson expanded the Cavaliers’ lead to 38-20 less than halfway through the third quarter. A key contributor to this success was excellent ball movement by HB. The Cavs’ defense fired on all cylinders as well, holding West to just four points through five minutes of play. With a 44-23 lead and 1:53 remaining in the quarter, HB went to their bench for the first time in the game, bringing in Haley Modelski ‘17 and Elizabeth Bonnette ‘20. Strong play continued, and the third quarter ended with HB leading 45-25.

The Cavaliers dominated to open up the final quarter of play. Starting off the quarter 7-0, both offense and defense looked strong for HB. As the quarter rolled on, HB unloaded their bench, with Simonds and Barassi entering the game. Through five minutes of play, the Cavs’ lead grew to 57-29. Soon after entering, Barassi dropped two points, expanding the lead. The rest of the team performed well on both sides of the ball, and finished out the game with a final score of 65-34.

Hollis Brookline picked up their sixth win in a row, bringing their record to 7-1. Dropping their third in a row, Manchester West fell to 3-4 on the season. HB executed strong offense and defense throughout the game, and the win further backed their status as one of Division II’s best. Currently the number two seed in the standings, the Cavaliers are setting themselves up for a deep playoff run if they can continue their performance.