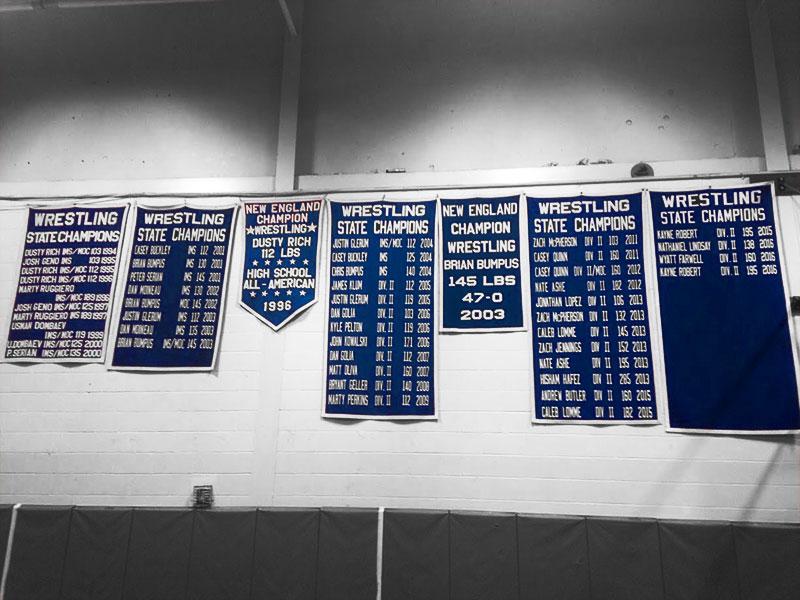 The number of wrestling banners speaks to the success of the sport at HB throughout the years.

Hollis Brookline wrestling has a history of success. They are easily the winningest team in the school’s history and are consistently competitive. This is often due to a large core of seniors. But this year’s team is different. While there is still plenty to be excited about, including success, this group of Cavaliers is unique compared to teams of the past.

The team is still finding success and staying competitive. Currently holding a 3-3 record in Division II, the team is in the middle of the pack compared to others in New Hampshire. “We’re working really hard,” said team captain Sam St. Pierre ‘17. “We have a solid team and it’s a good group of guys. We’re all friends.” St. Pierre went on to say that they all respect each other, which is an important character trait in a team looking for an edge over their opponents.

Another notable aspect of this wrestling team is the athletes’ ages. As previously stated. This team is different, however. Rather than a team featuring mostly seniors, this group has a large body of underclassmen. “We have eight sophomores,” said coach Brian Bumpus. “They’re a group with some potential and can be very strong for us in the future.” Coach Bumpus sees this year as the chance to build up for the coming years, with the majority of the team sticking around next year instead of graduating. “Learning skills and techniques are big. We’re sharpening our skills and building for the future,” said Bumpus.

The team recently returned from their annual trip to Saratoga, New York for a big wrestling tournament. While this tournament does not contribute to the NHIAA standings, the athletes and coaches still see it as a worthwhile trip for the team. “The trip is a chance for us to experience new wrestling styles from new teams,” said St. Pierre. “It helps when facing familiar teams.” Cam Lapierre ‘18 also sees benefits to the team’s trip, stating, “It helps us get closer to our goal of doing well in States and Meet of Champs.”
With much of the season left to be played, HB is continuing their hard work to continue the trend of finishing as a top team. “It’s a mental game. Confidence is big. The mental game is seventy-five percent of the battle,” said St. Pierre.