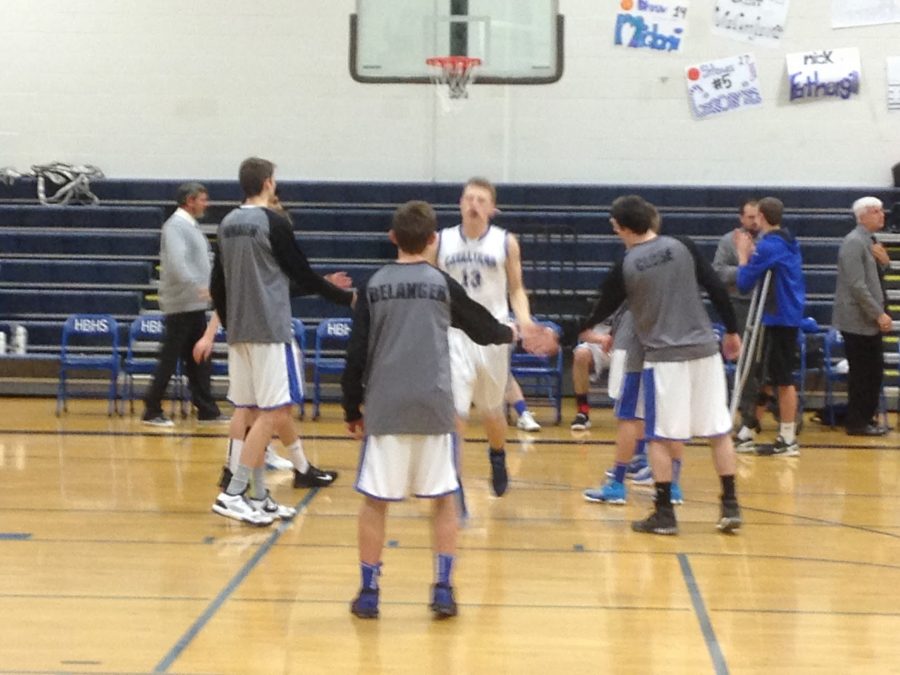 The Hollis Brookline Cavaliers picked up their sixth win of the season in their home game on Wednesday against Bow. Missed shot, turnovers, and few opportunities provided by the defenses resulted in a low scoring game. Entering the game, HB held a 5-1 record, while Bow stood at 3-3. In their previous meeting this year, the Cavs squeaked out a win against the Falcons, 36-35.

The Cavaliers were slow on offense to start out the game. Turnovers were a problem for HB at the beginning, and they didn’t score their first two points until four minutes had already burned off the clock. Bow was playing similar basketball, however, and HB’s defense kept them in the quarter. The first quarter closed out with Bow in control of the game by a score of 8-4.

The second quarter started off with some quick scoring from HB. A fadeaway jumper and a three from Stephen Giaconia ‘17 picked up five quick points for the Cavs. For the first three minutes of play, Bow was held scoreless, and HB picked up a 9-8 lead. Scoring remained a rarity in the game, as Bow’s three with 1:20 remaining on the clock was their sole basket of the quarter. Down 11-9 with seconds remaining in the first half, the Cavaliers got the ball to Nick Fothergill ‘17, who hit a buzzer beater three to close the half. HB led Bow 12-11.

The third quarter featured scoring from both teams at a more typical rate, as both teams more than doubled their first half scores. HB started off with a 6-0 run in the third, but Bow clawed back, bringing the score within two points and leaving the Cavs with a 20-18 lead with half of the third quarter remaining. The lead swung back and forth from this point, until Matt Simco ‘18 went on a run, scoring five points, picking up an assist, and grabbing a steal in under a minute. The third quarter ended with HB clinging to a 27-25 lead.

The first four minutes of the final quarter saw the lead swing back and forth between the teams. Another three from Fothergill put the Cavs up 36-35, and they didn’t look back. HB retained the lead for the remainder of the game, eventually winning 41-37. Other than their other win against Bow, the game was HB’s lowest scoring win of the season.

At 6-1, HB sits near the top of Division II standings, holding the third place spot. Scoring will need to pick up if the Cavs want to defeat teams sitting above them, but the team has shown they can put up big points when they need to. With a 3-4 record, Bow is around the middle of the pack in Division II. If they want to make a playoff run, they’ll need more close games like this against top-ranked teams.