Chaos at the Capitol: Stalemate leads to shutdown as GOP tries to compromise 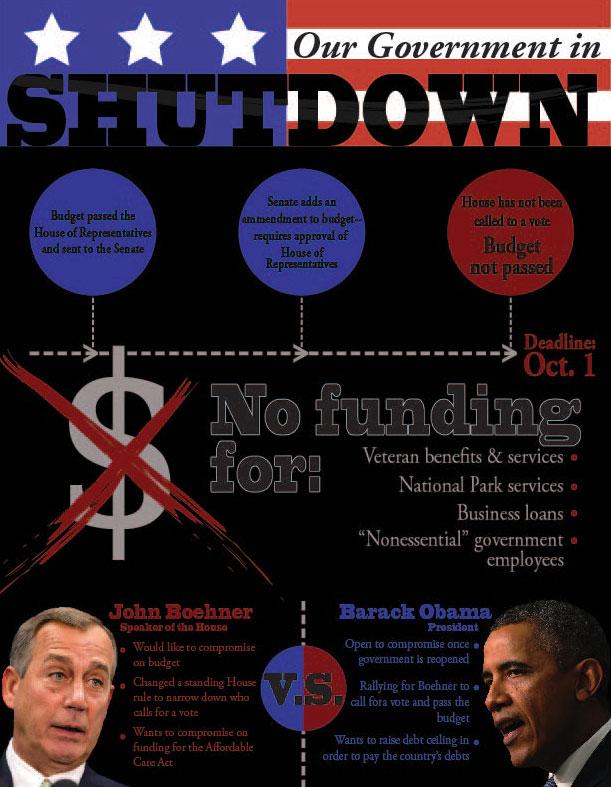 How the shutdown occurred and the effects

As of Oct. 1 this month, the U.S. government has had its first shutdown in seventeen years, highlighting a stalemate between both political parties over the spending in the nation’s budget. Since the budget was not passed before their deadline at midnight through the House of Representatives, all government services have come to a halt.

If the shutdown continues for an extended period of time, it will affect the funding of national parks, government-provided services, such as business loans and veteran services, may come to a halt, and the federal employees in departments such as The Environmental Protection Agency and NASA will be furloughed without pay, whether or not they are deemed “essential”. With the looming possibility of the economy defaulting after its slow recovery, the republican-dominated House

While addressing the M. Luis Construction Company in Rockville, Md., President Obama stated, “There are enough Republicans and Democrats in the House of Representatives today that, if the Speaker of the House, John Boehner, simply let the bill get on the floor for an up-or-down vote, every congressman could vote their conscience — the shutdown would end today.”

Without the bill being called to a vote on the House floor, there would be no way to let the government spend money. Not only would this hinder the services it provides to its people, but it also would prevent any of the nation’s debt from being paid off. If the shutdown comes to this outcome, the economy would default, and an even worse recession would hit than the one the U.S. is coming back from.

Even though the Affordable Care Act is an active, constitutional law, it seems that members of the Republican party are still trying make compromises on it. By stalling on the official vote on the government’s budget, they are only holding the economy over the brink of collapse in efforts to get their way.

Whatever the outcome of this deadlock may be, people all over the country, like Anne Reuter, ‘14, are fed up with the situation in Congress. “They’re breaking their own rules, and they need to get back together to fix it.”

UPDATE: As reported from the Huffington Post, the Senate took the reigns and passed a bill to reopen the government and raise the debt ceiling until further compromises could be made on the federal budget. Obama and democrats in Congress stood strong on their stance to not negotiate over already-signed laws as the stand-off ensued, and a default was successfully avoided as the government reopened. However, Congress is back at square one as they try to pass a new budget.

“We achieved our goal, but at a cost. It never should have been this way,” said democratic Sen. Chuck Schumer from N.Y. With a vote from the House of Representatives and a signature from the president, Congress will have more time to discuss the budget while the treasury will be able to fund the government through Jan. 15 and borrow normally through Feb. 7.