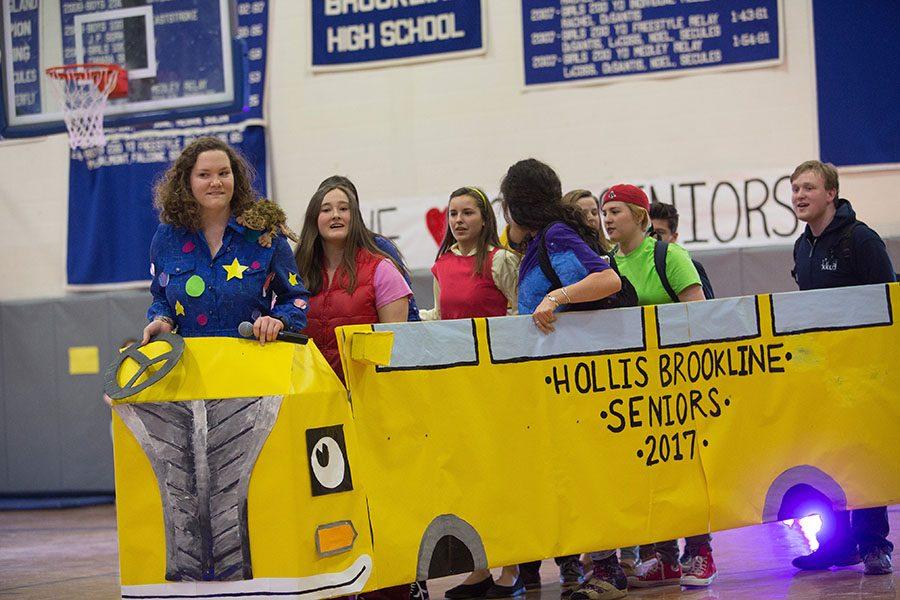 Senior skit members go on a trip in their "Magic School Bus".

Spirit Week came to an emotional close on February 24 in the school gymnasium. The class of 2017 won for the second time, becoming back-to-back champions. But this was a Spirit Week was more than just a win for the seniors; it was a celebration of what makes the class special.

The skit was a time machine of sorts, based around the Magic School Bus, a show we all learned from and loved as 1st and 2nd graders. The actors traveled through the fun times the class had:  Freshman Orientation, the DC trip, even all the way back to the first day both towns met each other in 6th grade. Then came a fast-forward to graduation, saying farewell to our classmates, trying to hold on to the many friendships we made over the last 6 years together and the last 12 years as individual towns. The skit ended in tears of sadness to Rob Thomas’ “Little Wonders”. There were few dry eyes in the gym that day–everyone was affected by the emotions of the senior class.

So much goes into the creation and execution of the Spirit Week skits that most people overlook student effort and take it for granted. Even for my small role–Middle Schooler #1–I had to learn the dance, know my line, and know where to be on the gym floor. The main characters of the skit had so much more to remember, but pulled through beautifully. The posters were well-crafted across every grade–overall, a job well done by everyone. In my four years, I have never seen such a display of 4 great quality posters. They were amazing.

This year’s Spirit Week had a different feeling for the class of 2017. “For anyone that was there this year, a different dynamic was present than [in] past years,” Maggie O’Hara ‘17 commented. “It was more relaxed, people were happy to help, people brought food, and everyone was there for each other. This was important to maintain a lower stress level.” She went further into how students got to know one another better and got to talk to students they may not have talked to much before. “It’s nice to see someone the next day and smile at them,” O’Hara later said. “Our grade is very cohesive…it contributed to how well it turned out in the end.”

Paige Gionet ’17 was one of the main writers of the senior skit: “We’ve had this idea planned for two years, so we knew what was coming and were prepared.” Gionet also touched on how the skit went smoothly last year  which made it easy to build on. The seniors used what worked in the new skit. Gionet had a vision for the final part of the script: “As the writer of the last page,” she said, “it was really touching to see everyone’s reactions, including the other grades…Gionet finished with a single statement: “Spirit week…I’m going to miss it.”

In high school, there aren’t a lot of school-related events that a student looks forward to every year. Spirit week is definitely one of those few that all students anticipate the excitement of, with all seniors reminiscing in the same early feelings of nostalgia.
Class of 2017, we’ve been through so much together. I will miss every single one of you, whether you know it or not. It doesn’t matter if  we never spoke or if we’ve had hour-long conversations every day- you’ve all impacted me in some way, directly or indirectly. Congratulations on the win, and thank you to all who helped with the skit, the posters, and the bus. Last year’s skit was about winning, but this year was about US. It’s been a fun ride! Let’s make the most of these last few months together.