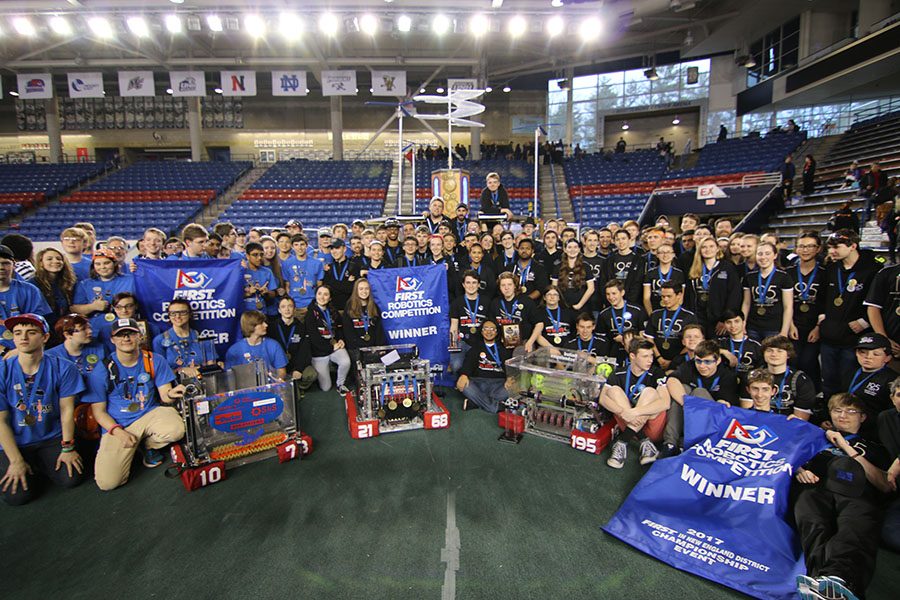 HB's FIRST Robotics team wins first place at the district meet held April 6 through 8. The team then moved on to Nationals in St. Louis from April 26-29 (Stay tuned for information on the latter competition).

The HB Robotics team traveled to UNH for their three-day district robotics competition from April 6 to 8. The Force Team was matched up against the top 64 teams all across New England. All the teams were competing to qualify for the national competition in St. Louis, MO– and the Force Team came out on top.

Each team in the competition worked for  several months to build a robot that performs multiple tasks and overcomes obstacles on a field. Abby Lewis ‘17, one of the team’s CEOs, described the game: “The game we play is called Steam Works, in which we have to earn points by collecting and placing gears and pegs, also scooping up tennis balls and launching them into a goal and–in the last 30 seconds–we have to climb a rope with the the robot,” she said.

Sue Hay, the Force Team Coach, said, “The matches are three robots against three robots, and only the winning team moves on. A lot of competition is luck of who you get paired up with and against, but there’s also a lot of strategy involved.”

Cody Gagnon ‘18, the Force Team driver, described what led to the team’s success: “A big part of our win was the work that our mechanical sub group did. They spent two weeks using software to design the robot before building it. The amount of time we spent designing was a key factor to our success this year. I also spent a lot of time practicing driving the robot in the gym and had the help of Kyle [Hamblett ‘17], who was giving me driving advice,” he said “everyone played a big role in our competition win.” Since the win, Hay and the team have been preparing: “Our scouters are gathering info about the teams that are going to be in St. Louis, along with scouting what our field will look like. Also, our drive team has been practicing in the [HB] gym and getting ready.”

The 2017  FIRST Championship Robotics competitions were held from April 26-29 in St. Louis and Houston, with The Force Team competing in St. Louis. They ended up being picked as an alternate for the fifth seeded alliance in their division, but did not make it past that round. The robotics team has had a great season and Abby Lewis is optimistic about the team’s future, “We’ve never won a district championship before, so this was really exciting and I can’t wait to see where the team goes in the next few years”.