Tale as old as time 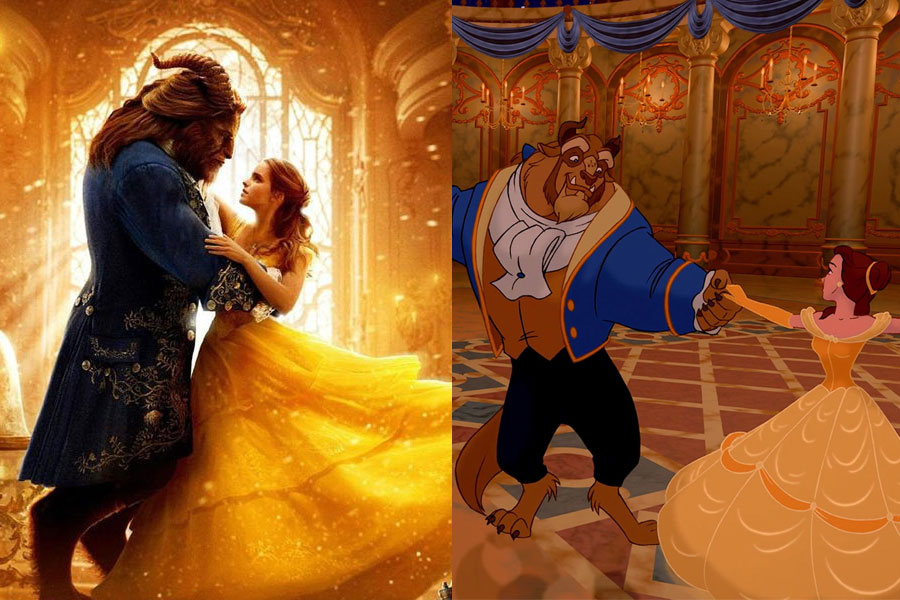 Emma Watson and Dan Stevens in the famous ballroom scene, alongside their animated counterparts.

In recent years, Disney has been releasing live action remakes of its most famous animated films. Its first movie makeover, Alice in Wonderland, released in 2010 featuring Mia Wasikowska as Alice and Johnny Depp as the Mad Hatter. Most recently, on March 17th, Disney released a remake of their 1991 movie Beauty and the Beast, starring Emma Watson as Belle and Dan Stevens as the Beast.

Although the new rendition follows the same general plot line as the animated original, there are still differences between the two; the main difference in terms of plot is the introduction of a new character named Agathe. Though initially she may seem unimportant, she is arguably one of the most pivotal presences in the entire movie. Under the guise of an old maid, Agathe spends her days begging on the street and trying to stay out of the way of the busy townsfolk. At night, it is assumed she lives alone in a nearby forest all by herself. However, Agathe is not nearly as simple or weak as she appears. It is revealed at the end of the movie that Agathe is actually an all-powerful enchantress. Many years prior to the current story, Agathe turned a handsome yet cruel prince into a ghastly monster, with his only hope of turning back being true love. In the original Beauty and the Beast, Agathe is mentioned only in passing, without even being given a name.

Agathe helps Maurice, Belle’s father, after he is tied to a tree– another major plot difference. In the original movie, Gaston and his adoring sidekick LeFou dismiss his claims that Belle is trapped in a castle. Whereas in the new movie, Gaston and LeFou, played by Luke Evans and Josh Gad respectively, tie up Belle’s father to a tree after looking for her in the castle in the forest. They leave him to die, with only LeFou showing any kind of remorse. The villainous nature of Gaston is apparent in both films, though the remake takes it to a darker and more sinister level.

A big change in the new movie is the inclusion of four new songs. “Aria” is sung by Madame Garderobe, portrayed by Audra Mcdonald. With this song comes the introduction of a new character, Cadenza. He is the maestro of the castle’s music ensemble, and love interest of Madame Garderobe. Via the enchantress’ spell, he is turned into a harpsichord, while Madame Garderobe is transformed into a wardrobe. “Days in the Sun,” another new song, is sung by the members of the castle ensemble and Belle. It details their everyday struggles of being trapped in the castle. The third new song “Evermore” is performed by the Beast after Belle leaves the castle to find her father. He laments about his past, and that although Belle runs away, he knows she will always love him. The final new song, “How Does a Moment Last Forever” is sung twice in the movie. The first time, Maurice sings it while reminiscing about his deceased wife. In the reprise later on, Belle sings it as she remembers her childhood.

Overall, both movies follow the same general story, but there are clear differences between them. Whether these changes are for better or worse are up to personal preference.