Stellaris Utopia: a great expansion to an already great game 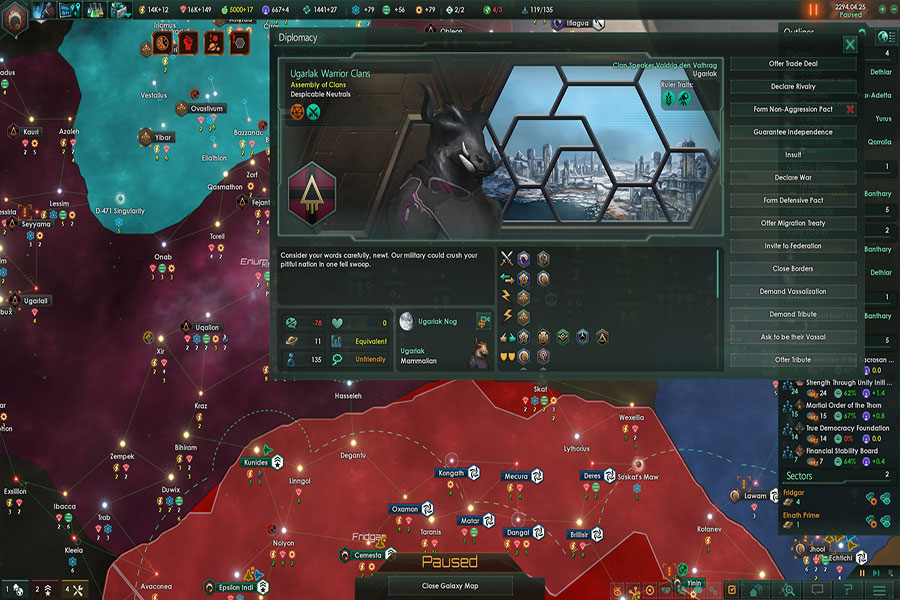 "Utopia" is a recent DLC pack for the PC game Stellaris that greatly enhances the gameplay experience.

Summer vacation is, to many people, an abundance of free time with seemingly infinite possibilities. In some cases, there’s so much free time that filling it might seem like a problem. It’s good news, then, that the critically acclaimed 4X (eXplore, eXpand, eXploit, eXterminate) game Stellaris from Paradox Interactive has released its “Utopia” update and accompanying expansion pack just in time for summer vacation.

For those unfamiliar with the game, or even the nature of 4X games, the premise is that the player creates a unique species to play as. The creation process involves choosing appearances, making a flag for your empire, and selecting government policies. Players can determine every minute detail of their empire, going so far as choosing the noun that other races will refer to your species as. 4X games by nature allow the player to traverse and spread across a vast world. In the case of Stellaris, it’s a randomly generated galaxy. With that galaxy comes other species, similarly trying to expand through one way or another. Alliances can be formed and broken, wars can be declared over everything from the freedom of a vassalized species to nothing at all, or a massive federation can be formed to bring the galaxy together.

The “Utopia” expansion, available for $19.99, introduces megastructures that the player and other species can create, offering bountiful bonuses at the cost of monolithic production times and maintenance fees. Some function as artificial planets, while others harness a star’s energy by completely surrounding it. Paramount to the megastructures are new ascension perks: modifiers that can change the very nature of a species with practical ingame benefits, such as increasing the border range of an empire and the terraforming speed of planets. The expansion also gives players the option to play as a hive mind, uniting citizens on all issues and preventing them from diverging from governing ethics. There is also a new endgame crisis, bringing the total count to four. Endgame crises are cataclysmic events that can endanger all life in the galaxy. I won’t divulge any of their details as experiencing them for the first time is an experience of its own.

“Utopia” has an average critic review score of 82% from 9 outlets on Metacritic, a popular review aggregate site, and it’s a score that I can’t really argue with. It has a large amount of quality content put into it, and definitely changes the way that players approach the game. Really, the only thing that doesn’t sit well with me is the fact that the expansion costs $19.99. While it does add some very interesting features that I genuinely had fun with, twenty bucks for an expansion seems a tad overpriced – maybe $14.99 would have been more suitable. It’s not a regrettable purchase, but it’s not one that I felt like jumping on immediately.

Overall, “Utopia” is a welcome addition to the already solid Stellaris, and even if you don’t buy it, the update that integrated it added some nice features to the base game. “Utopia” isn’t a necessity, but it adds even more variety to a game that already has an abundance of uniqueness and charm.