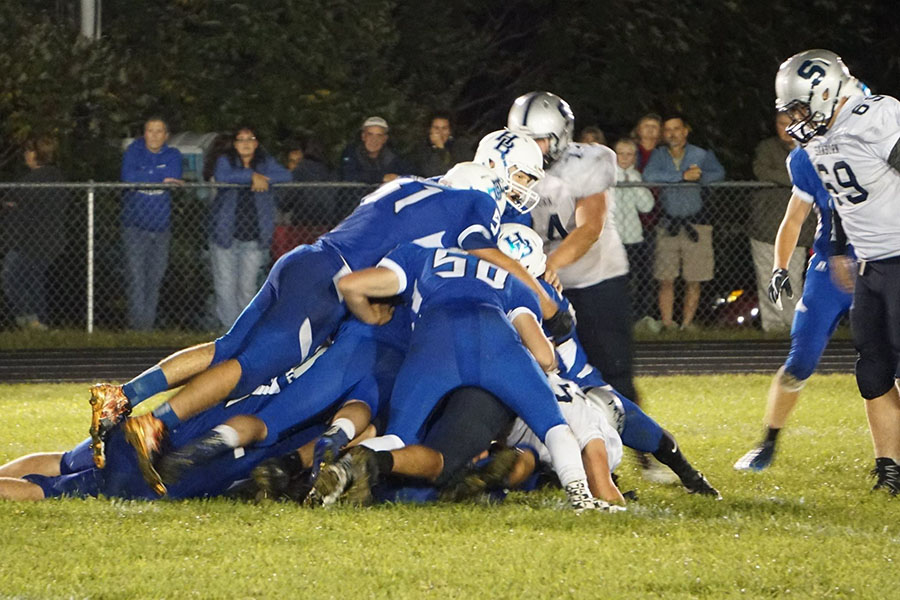 Players making a tackle during HB's 25-7 win against Sanborn

The Hollis Brookline football team finished 7-1 last year, their best season by far. While they did lose seniors who were crucial to this historic run, the expectations did not lessen for the 2017 season. In 2016, Joey Delaney ‘18 threw for 2,061 yards and 31 touchdowns – both school records and Division II leading stats. That incredible stat line was expected to develop even more this season until Delaney suffered a season ending collarbone injury in quarter one of game one versus the Windham Jaguars.

Delaney expressed great disappointment, but it seems the team won’t let this hang over them. “Getting hurt was the worst case scenario for this season. It’s tough but that’s life. I think we’ll do fine as long as we play hard, and play for each other. The quarterback plays a huge role in our team’s offense, and Sander is working hard to take over my previous role.”

Matt Simco ‘18, top wide receiver for HB and team leader with 772 receiving yards last year, also had high praise of backup QB Sander Wimmer ‘20. “I think our backup guy [Wimmer] will be just fine. The offense changes a little. We might have to air it out a little more. Joey’s injury is for sure a blow, but there is no reason why we can’t still make playoffs.” Sander, who is a sophomore and has not had varsity experience aside from a couple quarters against Windham last Saturday, isn’t too fazed by being forced into a starting role. He said, “Coming in I feel a little nervous, but at the same time I am excited to get on the field, play hard, and lead HB to wins. I feel that the coaching staff has done a great job preparing me to play well by giving me lots of reps in practice and preseason.” It is encouraging, as a fan of HB football, to hear how much players believe in Wimmer, and that the coaches have developed him and will continue to give him opportunities.

The Hollis Brookline football team took on Sanborn Friday night, September 7, in Wimmer’s first career start. And the team’s confidence in Wimmer wasn’t false – he was the real deal. He completed 65% of his passes, throwing for 247 yards and a whopping four touchdowns. Three of the TD passes went to Simco, and one to Jeffrey Arnold ‘19. HB won 25-7. Wimmer stepping up and having such a great game is a testament to the great team and coaches HB has built for the 2017 season. Hopefully, the wins don’t stop there.