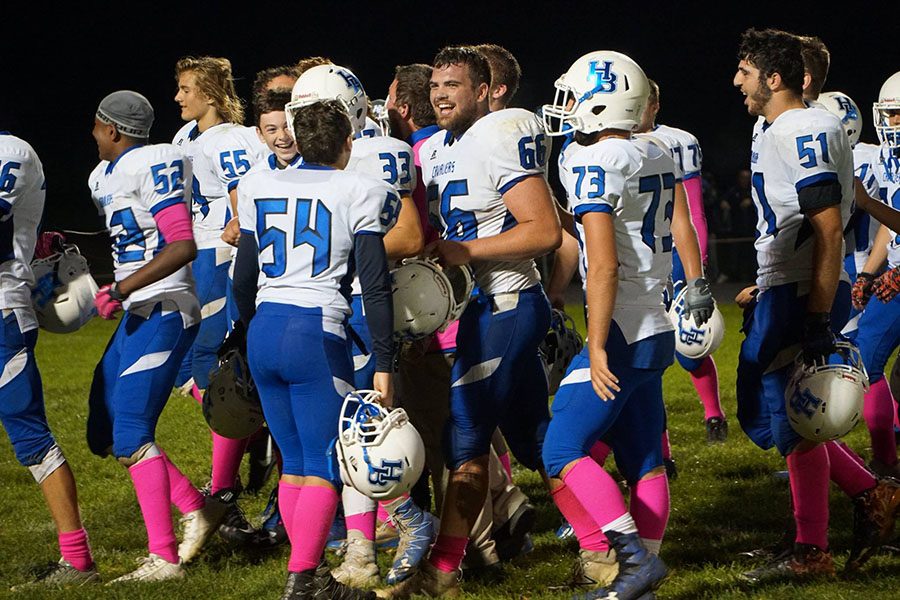 The Varsity football team celebrates after their win against ConVal last week. They beat the Cougars 21-13 on ConVal’s home field. With the beginning of playoffs fast approaching, scoreboard operator and fan Alex Basbas said that he thinks “this year might be the year” for the Cavs.

This Saturday, the HB Football team will take the field against Manchester West for their homecoming and senior game. The Cavaliers anticipate an easy victory, as they are currently 4-1 this season with three games remaining.

The players have a very positive attitude about this weekend’s game. “I feel extremely confident coming off last week’s win against ConVal,” said Garrett Maloney ‘18, defensive end and left tackle. He was proud of how the team stepped up and did their job to defeat the 4-0 Cougars.

Since Manchester West has won only a single game in their past twenty-seven, the Cavs don’t seem to be worried about this matchup, even with the injuries of receivers Michael Gillespie ‘19 and Connor Zorn ‘19 last weekend. The team has had a lot of hurt players this year, most notably the loss of starting quarterback Joey Delaney ‘18 in the first game of the season.

However, the boys have adapted well. Multiple players spoke of the team’s determination; Gillespie, who will be out this Saturday due to a concussion, stated that although “injuries have definitely been affecting the team… we’re not letting it stop us.” Lineman Michael Moscatelli ‘19 felt similarly, stating, “we’re not going to let injuries define our season.”

Both fans and players have high hopes for the Cavs as they near the playoffs. Although their spot is not locked in yet, it seems likely that they will make it into the tournament. They feel optimistic about the playoffs, but are taking the rest of the season one week at a time, according to Moscatelli. As for this week, he hopes that a lot of fans turn out to cheer on the Cavs, both to celebrate homecoming and to honor the senior players.

Saturday’s game will kick off at 2:00PM.