“Lad in a Battle” visits HBHS 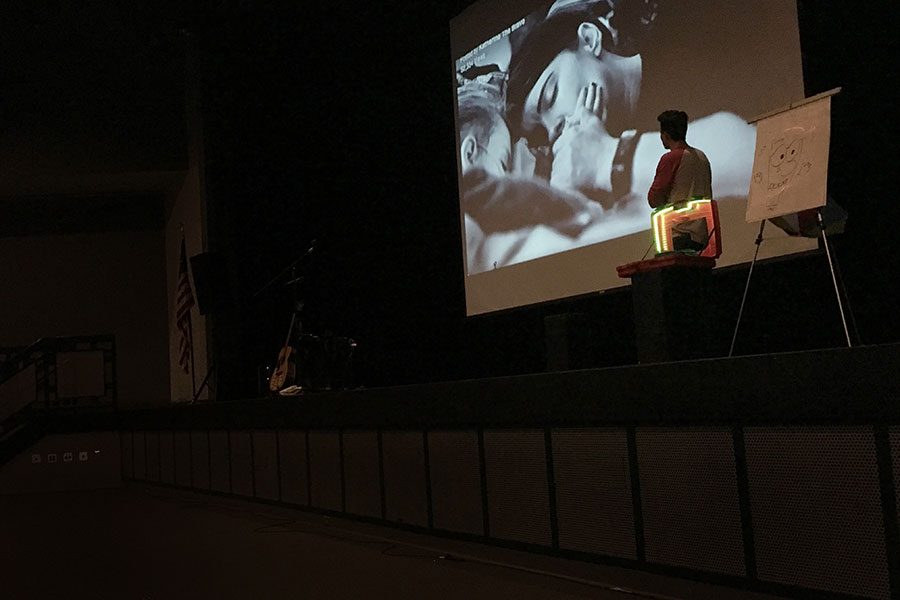 James Orrigo presents an emotionally moving video of “Katherine the Brave,” a girl who passed away from an incurable form of brain cancer on June 6, 2016. Orrigo dedicates himself to creating lasting legacies for suffering pediatric cancer patients by producing music videos co-written by those same children right from their hospital beds. “I think [Lad in a Battle] really had a positive effect on the student body, because it gave a powerful message of turning overly negative energy into positive actions,” says Max Porter ‘18.

On Oct. 10, students at Hollis Brookline High School gathered to listen to James Orrigo, founder and CEO of “Lad in a Battle”, during sixth period in the community auditorium. The motivational presentation focused on encouraging students at HBHS to take negative situations in life and turn them into positive action to improve themselves and their community. Orrigo is a singer/songwriter/cartoonist who travels around the U.S with the mission of empowering young adults, while also working in hospitals across the nation to create lasting legacies for pediatric cancer patients through songs and videos.

In his presentation, Orrigo had the following advice for students: “Push yourself outside of your comfort zone, and make your life count,” urging students to focus their efforts toward the common good, which will in turn benefit themselves and their communities. The presentation was reminiscent of the age old mantra “what goes around comes around.”

Lad in a Battle is just another example of HBHS procuring exceptional motivational speakers from the local community and beyond.  This comes at a pivotal time, as students prepare to enter the next stage of maturity after leaving high school, where the prevailing use of tolerance is vital.

“I feel like a lot of my peers are becoming more tolerant and understanding, which… is comforting to see,” says Gabi Frugard ‘18, when asked if the call of positive actions at HB over the last few years has had any effect. Frugard reflected on recent HBHS tragedies from drugs, alcohol, and bullying, and addressed that the movement to create a positive and motivational environment in the school is picking up steam organically.

“I’m excited to see that it is not just ‘the school’ presenting all of these events, but rather it’s the [different] pieces of [the] community coming in saying ‘we believe this, we want this to happen’ and they can take steps in a given direction to achieve it,” commented Principal Richard Barnes on HBHS events and culture.

There is much more to be excited about as the year crawls on, such as the annual walk sponsored by “Life of a Cavalier,” that will promote the tolerance of diversity and differences.