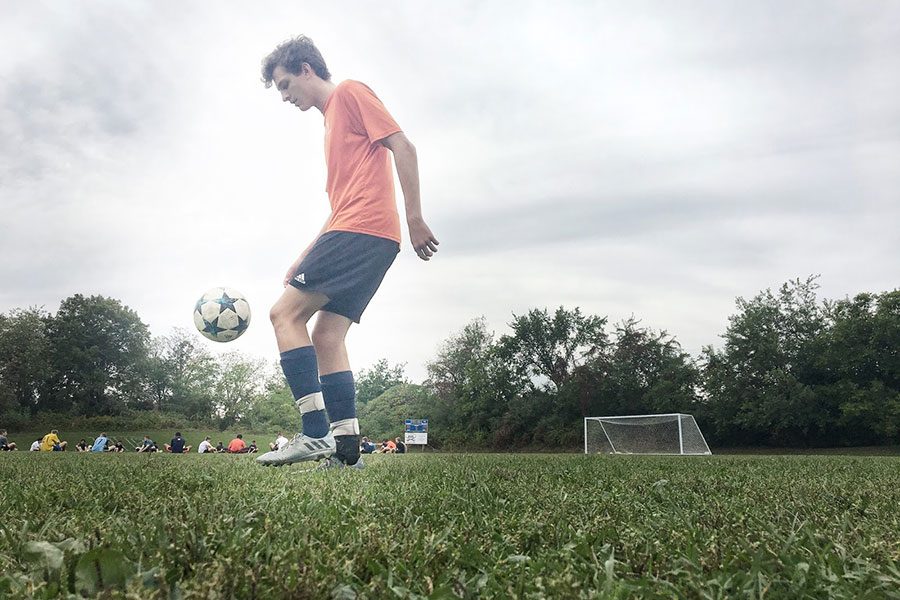 Jonathan Brackett ‘18 warms up on the sidelines, juggling his soccer ball to get loose. He has been known to juggle for thousands of touches in a row, and it translates to great control and skill on the field. Brackett said he’s excited for college soccer, and he cannot wait to continue his career.

The Cavaliers have had some great student athletes over the years, and for the second time, Hollis Brookline has another soccer player from the soccer-focused and athletic Brackett family looking to play in college. Hollis Brookline’s Jonathan “JB” Brackett ‘18 is in contact with multiple colleges about playing soccer, the biggest school being Bryant University, a Division I school in Rhode Island.

Brackett’s sister, Sydney from the class of 2015, plays for Syracuse, so he has been through the recruitment process already. “It didn’t help that my sister was a Division I athlete, but solely because she was one of the top Division I athletes in the country.” Being a recruit for a big Division I school like Syracuse means playing nearly nonstop. JB is in a different boat; the schools he’s in contact with aren’t as large, and hold more intimate meetings with recruits.

Brackett has been a four-year varsity player, but this is only his second year with Coach Steve Martus, who spoke to JB’s skill by saying that JB can play anywhere on the field, knows how to distribute the ball offensively, and can play defense when he needs to. Martus continued to say that he can see JB starting for a college team as a freshman.

Brackett’s friends and teammates  say great things about him on and off the field. “He has those leadership skills that you really need to be a captain and lead the team,” JJ Kennedy ‘20 said.

No matter where Brackett decides to go, he will have a shot at playing time. He will be one of many college athletes this senior class sends to schools next year. Brackett told the media that he will play soccer in college, so count on seeing him on the field again soon.