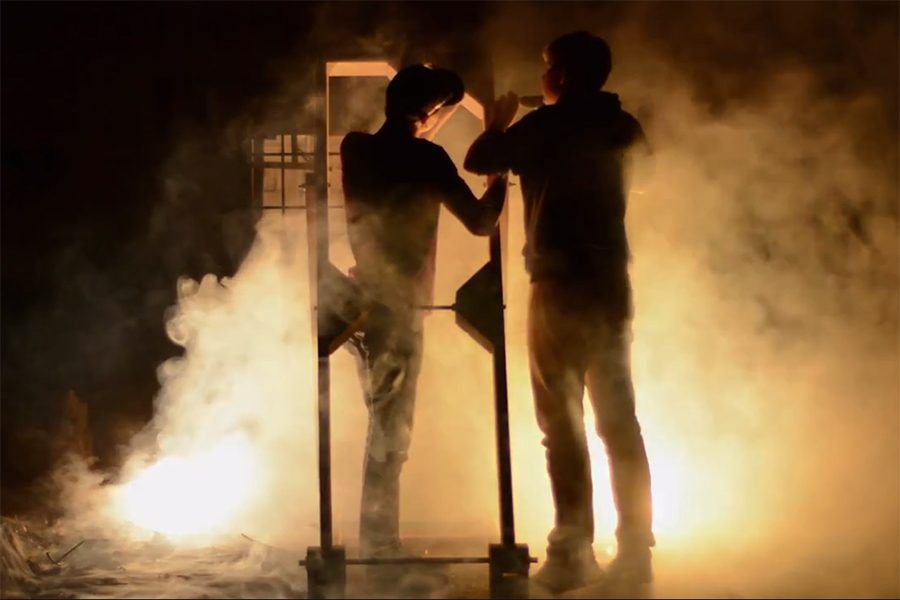 Ryan Farquhar, local renaissance man, puts the finishing touches on his treb for last year’s project. His group built an interesting variant on the base trebuchet using a design called a “murlin,” using various ropes to increase the acceleration of the machine. “[Trebuchet Day] is the big hurrah of the year for physics,” said Perry.

This Friday yields one of the most exciting and anticipated in-school events of the year, the AP Physics I Trebuchet day. Every year, the physics students of Hollis Brookline High School lay awake in their beds on treb day eve, listening for the sound of the *clop clop clop* of trebuchet wheels moving on the rooftop, only to wake up in the morning to a grueling day of rain and misery. This year will be different, however, as the students of Physics Club and AP Physics II plan to add some spice, cinnamon spice that is, to the already exhilarating day.

Beginning only its second year, the HB Physics Club is looking to get its feet off the ground as Keely Scott ‘18 and Rachel Romanow ‘18, co-presidents of the club, have ambitious plans for the future. The start of their drive towards funding for the year’s adventures is a fundraiser they will be holding this Friday morning: the sale of a selection of heart-warming beverages to bite through the historically chilly Treb Day. “We’re fundraising to get T-shirts for our team as well as we’re looking for a sponsor because we’re trying to finish a pyro board… and we also wanna build an x-ray machine,” said Scott, outlining her bright hopes for the future.

The encouragement of physics excitement and education is a huge passion of Scott and one that is shared by Adam Wilcox, Physics Club advisor and a physics teacher at HB. Wilcox has been teaching here for four and a half years, and in that time he’s seen his fair share of Trebuchet Days, so for him the idea of something hot on this historically weathered day has a special appeal. “Last year was without a doubt the worst that I’ve had,” said Wilcox, acknowledging the torrential wind and rain as something that put quite the damper on the day’s activities, although wind is never absent on a late October day in New England. Eric Perry, fellow Physics teacher and club advisor here at HB, shared his views on Trebuchet Day as a newer participant, and more particularly the unbearable weather trends that seem to come on the same day each year. “Last year was downright awful,” he said. In spite of only being in his third year of teaching here Perry’s already seen his fair share of brutal Trebuchet Days. That in mind, the two were both on board when Scott recommended that Physics Club sell hot drinks on the morning of Trebuchet Day in order to take the sting away. Prices will settle at a flat $1.50 for anything the morning of or $1 for a voucher in advance, redeemable for a drink that morning.

So if you’re a student planning on shooting off some balloons Friday morning, or a teacher loathing an early morning in the cold, keep an eye out for a Physics club student to get that order in in advance. You never know when you’ll be yearning for some hot cider, coffee, or cocoa to spruce up your day.