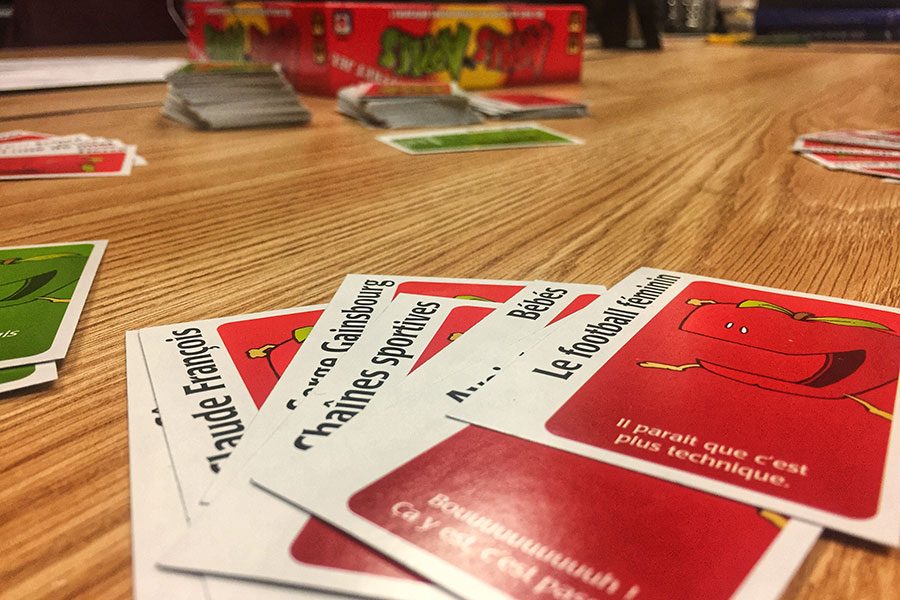 Allowing kids to naturally improve their French, games are also enjoyable. Apples to Apples En Francais is a popular choice. “So we play those games in French and we communicate in French, and there is quite some Frenglish, but it is not stressful, very spontaneous, and it’s lots of fun,” says Madame Faucher.

French club reaffirmed its popularity on Wednesday, October 25, with their second event of the year: Parler pour Parler.

According to Madame Faucher, “Parler pour Parler” roughly translates to “to speak just to speak,” but speaking French isn’t all it involves. The event drew many people together to speak French, play games, and eat snacks. Madame Faucher says that, “It’s really nice because there are no grades attached to it, and it helps students to become more spontaneous at speaking French.”

Students enjoyed it and were enthusiastic about French Club as a whole. “French Club is so cool because I love the French language,” said Kieran Mulligan ‘18, “I love learning French; for me, it was a big part of why I came to school in general for a long time.” Not only does the opportunity to speak French attract participants, but the French Club model, also used by Spanish Club, is interesting compared to other school clubs. Instead of trying for a meeting every week, it offers one well-planned event a month, which works pretty well. “French Club is just wicked fun, it’s fun to practice speaking in a language with other people who are trying to speak a language, and Parler pour Parler is great because you do that and also there’s food, and bonus points,” said Amira Elfadil ‘19, the French Club Vice President.

The next French Club event is planned for sometime before Thanksgiving and will be a Disney movie right after school, accompanied by soda and popcorn. French Club members agreed that any HBHS student can (and should) join French Club, even a Spanish student, as long as they make an effort to learn a little French. All that’s required to join and participate in the activities is a $5 contribution to fund events. Elfadil summed up the events by saying, “French club is fun, people should join!”