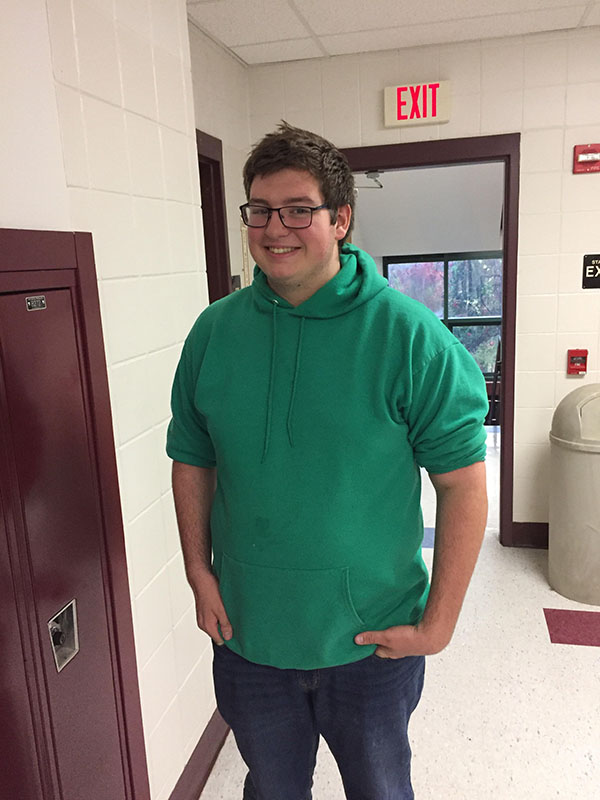 Pugh smiles for the camera as he stands in the hall. “I look forward to the festival in February,” he said with regards to the eventual Jazz All-State performance.

Frank Pugh ‘18 has been singing since the 5th grade; however, he has never been privy to such accolades as his recent acceptance into Choral Jazz All-State. He auditioned his sophomore year as well, but did not make it then. With respect to what he did differently this year to optimize potential for acceptance, he said he “ran through the material a bunch, stayed after school with Barbosa, worked in CavBlock, listened to the performance piece, and tested musical ideas.” As to his work with Barbosa, he said that he “spent the majority of his time preparing with Barbosa,” citing him as a valuable resource.

A major concern for Pugh coming into the audition was its potential conflict with schoolwork or other major responsibilities. He said the entire preparation process took about two weeks, though he was hesitant to audition initially due to fear of schedule conflicts. However, Pugh said that “The audition did not conflict with school or other responsibilities.” As for the audition itself, music teacher Matthew Barbosa said that it included a “memorized ballad with an artful interpretation, a choral etude with difficult harmonies and rhythms followed by a scat [improvised vocal] solo, and sight-singing,”- (singing a piece of music notation upon seeing it for the first time.) Pugh said that during the audition process, “the etude and scatting was hard, but the solo song – ‘That’s All’ was really easy.”

As to whether he received any helpful feedback from judges, Pugh replied, “Yeah, they told me I have a good tone but need to work on harmony and rhythm.” Nicole Plummer 19’, a fellow vocalist, said that she “expected him to make Jazz All-State.” It’s clear that Pugh’s musical reputation precedes him, and that he can look forward to greater musical successes in the future.