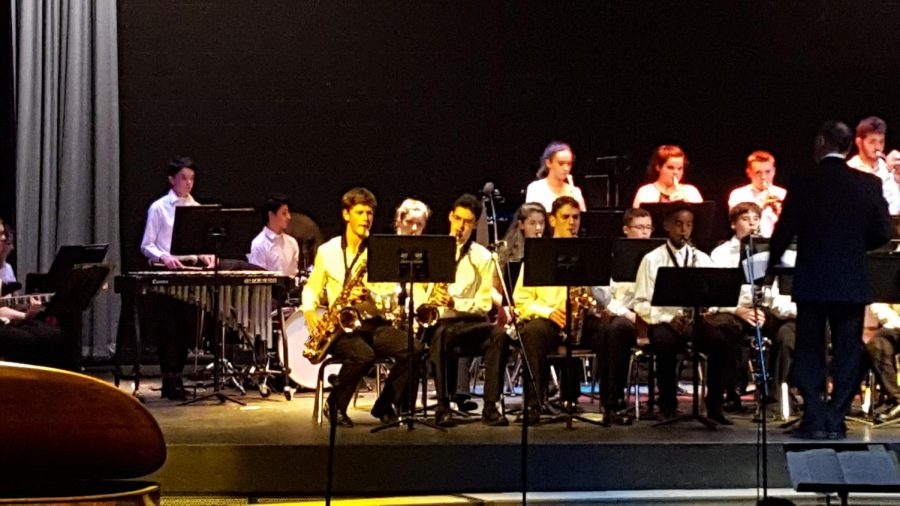 The jazz band performs their pieces for the audience of this fall’s performance. This band usually plays songs from a number of styles, ranging from laid back swing to upbeat funk charts.

Being both a stressful and busy time of the academic year, the fall shows aren’t usually known as the pinnacle of the music department’s capability, but this show was received very well. In addition, many people expressed their appreciation of the Concert Band’s performance of  A Hymnsong of Philip Bliss by David Holsinger and  Symphony No. 4 by UNH professor Andy Boison. Jack Sinclair ‘19, a trombone player for the concert band, rated the performance at an 8 out of 10 , a good review for the first performance of the year.

The Jazz Choir, with the help of the piano skills of hired pianist Brandon Buteau, performed their rendition of It’s Only a Paper Moon by Harold Arlen. “I think it went smoothly, and I think the singers had a great time,” said Nick Shepard ‘18. Shepard was asked to drum for the choir and, despite minimal practice time, thinks the performance went very well.

In addition to the Concert Band and choir groups, the Jazz Band and Honors Jazz Band performed a total of six songs, ranging from groovy blues jams to hard big-band swing.

After the graduation of a large number of talented musicians last year, the comparative level of this year’s band was at first in question; but after this performance, the future of the band looks promising. “[The concert] was a great start for the beginning of the year, and we look forward to playing more,” says Peter Szczeszynski ‘19, a pianist for the Honors Jazz Band.