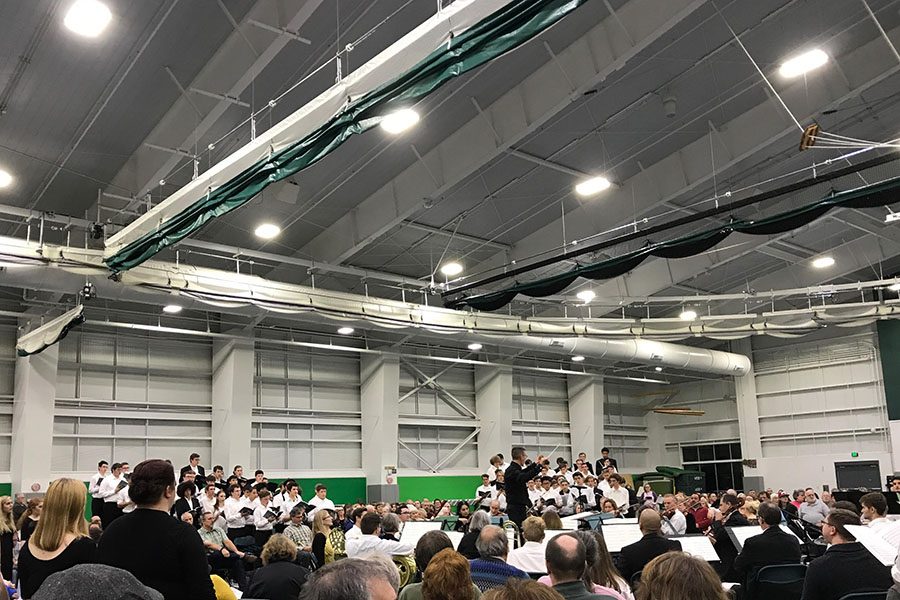 Students sing at the All New England Choral Festival on Thursday. The HB Honors Choir spent the day practicing and performing with other choirs from the area. Singers Jacqueline Hale ‘18 and Vivian Provost ‘18 enjoyed their time at the festival, saying that “it was cool to be around a bunch of people who just really enjoy singing” and “being able to hear that many voices from around New England was super rad.”

On Thursday, Nov. 2, the Hollis Brookline Honors Choir attended the All New England Choral Festival at Plymouth State University. The event consisted of 350 voices from around New England, performing Karl Jenkins’ The Armed Man: A Mass for Peace.

This year marked the 40th anniversary of the festival, led by Dan Perkins, the head of the Plymouth State University Choir Department. Usually, high school choir directors from around New England are invited to nominate about ten students for the festival, but this year Perkins asked high school directors to simply bring their entire choir program. Matthew Barbosa, HB’s choral director, took advantage of the opportunity and brought the Honors Choir to Plymouth.

At the college, they spend the entire day singing: first practicing the almost 90 minute piece and then performing along with a full orchestra. Jacqueline Hale ‘18, a member of the choir, described the day, saying, “we got to work on a piece that we had been working on for the last month or two [in class] and see it come together throughout the day.” Prior to the trip, the choir had learned five of the thirteen movements in class, but when they arrived, Perkins asked them to learn the rest of the piece for that night’s performance. Taking the surprise challenge in stride, the choir worked hard to learn the new material, as well as to help other singers master the movements. Barbosa was proud of the Honors Choir and the leadership they showed, as well as their skill and work ethic.

The singers had an enjoyable but tiring experience at the festival. It was a long day with a lot of singing, but the group “did a really good job figuring it out and going with the flow” said Hale. Fellow choir member Vivian Provost ‘18 agreed, saying that the trip was “exhausting, but fun”. Although the format of the festival may be different next year, it was a great opportunity for HB singers to perform with an orchestra and sing a larger and more complicated piece. Barbosa hopes to bring his choir back in the future.