Sex: Running the risks and knowing the rules 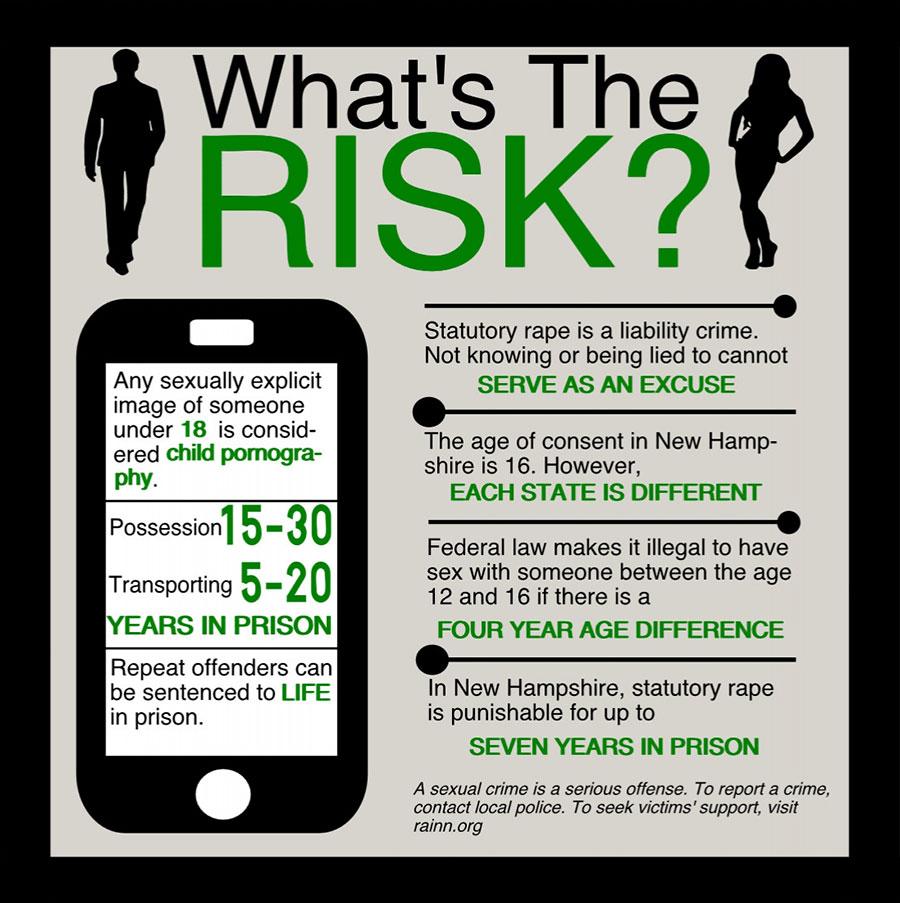 A summary of the state and federal laws regarding child pornography and statutory rape.

Most high school students are taught the same things about sex: the basic biology, safe sex, and STDs. These are important things to know because, if not handled properly, they can lead to some serious consequences. However, pregnancy and STDs are not the only possible results of being a sexually active teen. Even if both partners in the relationship say ‘yes’, consent can be easily trumped if the law says ‘no’.

The biggest issue today is sexting, defined as using mobile devices to view or send sexual content. Not only is it incredibly easy for nude images to circulate via technology, but most people who send intimate images to their boyfriends or girlfriends don’t realize how damaging their actions can be to both themselves and others. Even if it’s just to that special someone who promised not to share, the punishments surrounding sexting can be pretty severe. There are yet to be any laws written about sexting in particular; however, there are plenty regarding child pornography. Any sexually explicit image that includes a minor is considered child pornography. Even though New Hampshire’s legal age of consent is sixteen, a minor is anyone under the age of eighteen, and federal jurisdiction declares a state’s age of consent irrelevant when it comes to child pornography. Those caught with pornographic images of children face a minimum sentence of fifteen years in prison, and those caught transporting those images (physically and digitally) can be punished with up to twenty years in prison. So, stop thinking that sexting will just result in a slap on the back of the hand and realize that it can land anyone involved behind bars.

Not quite as easy to track, but just as easy to misunderstand, are the laws surrounding statutory rape. This isn’t aggravated rape, where one party is forced to participate in unwanted sexual activities, but is instead a strict liability crime. Even if everyone gives the brightest, clearest green light of ‘go ahead’, if anyone is under the age of consent, the punishment can be up to seven years in prison. Some states make their statutory rape laws a bit more complicated by including details regarding age difference and parental consent, but that’s not the case in New Hampshire, where the age of consent is set at sixteen, with no restrictions as to age difference or a specification regarding parental consent. However, consent from an individual under sixteen, or saying that the partner’s being underage was unknown cannot serve as defense against charges of statutory rape.

The most important thing that any sexually active teen can know is not just how to have safe sex, but to also know when to be smart about sex.

“What can seem innocent to some high school students can actually be illegal,” said Anna Giles, ‘15. “We don’t know the specifics, so there’s a risk.” Even though  someone doesn’t intend to commit a crime, a simple mistake or not knowing the full extent of some laws can land him or her behind bars for a very long time.

“Some are more aware than others,” said Jared Lemay, ‘15, “and not everyone respects those laws.”

Read detailed explanations of federal and state laws regarding statutory rape and child pornography to get better informed. To report a sexual crime, talk to local police, and to seek support or other help, visit RAINN’s Help Center. The HBHS guidance department is also open to any students who have questions or who need help.