Treb tradition is still on target! 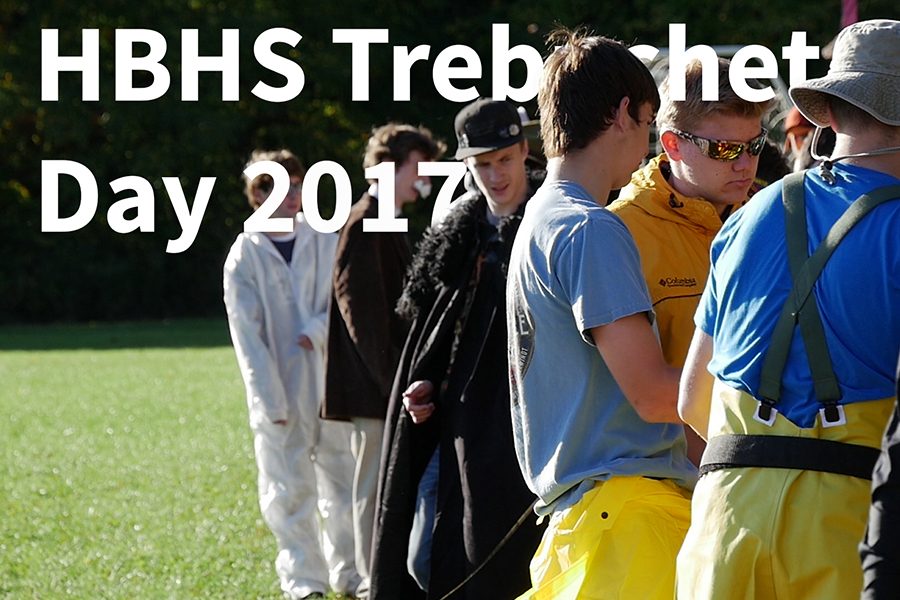 As per tradition, a legion of trebuchets was unleashed on the softball field in the early hours on the morning of Friday, October 27th, raining down water balloons on HB students and teachers. Treb Day, as it’s affectionately known, is a yearly staple of the AP Physics 1 curriculum, led by Hollis Brookline physics teachers Adam Wilcox and Eric Perry.

Treb Day is the culmination of a seven week project known as the “Trebuchet Project,” or “Treb Project” for short. For this project, groups of 3-5 students create and test a medieval-style trebuchet with the goal of launching a water balloon exactly 30 meters. These trebuchets can be a maximum of 1.5 meters tall and are created in many different styles, the most common variations including the traditional “fixed arm” trebuchet and the more specialized “floating arm” trebuchet. While many groups constructed trebuchets of these styles, there is another more complicated trebuchet model known as a “murlin” trebuchet. Only two of these models have been built in Mr. Wilcox’s five years at the school but none were built this year.

While outside on Treb Day, students have five attempts to reach their 30-meter goal. On their final trial, costumed students (a nod to the Halloween traditions at HB) also get an attempt to hit either Mr. Wilcox or Mr. Perry for extra bonus points. Besides just the performance of their trebuchet, groups are also required to submit a journal documenting their build process, a safety report detailing safety mechanisms on the trebuchet, and a presentation afterwards about the whole process. As physics student Jack Aldana-Proulx ‘18 said, his favorite part of the day was “seeing the unique routes that people took in tackling problems, because there was a wide range of solutions that people came up with for the project.”

Even though Treb Day follows weeks of testing and building outside of school, groups commonly faced issues with the reliability and accuracy of their trebuchets, despite the previous performance of the device. Some groups attributed this to the fact that the trebuchets have to be transported to the school, and during this process vital pieces of the trebuchets can bend or break. While some groups are affected worse than others, this can lead to many problems, including firing issues and a lack of accuracy. According to Khushi Patel ‘19, “we didn’t face any problems so we had a nice time, but I knew some groups had a lot of problems.”

Having participated in Treb day the year before, the AP Physics 2 students were also outside, helping to coordinate the visiting elementary students from HPS and RMMS. Ryan Farquhar ‘18, an AP Physics 2 student, described the day, “we pretty much just were helping out with the third-graders that came up from the Hollis and Brookline elementary schools.” The Physics 2 students also served as guides for the visiting classes, teaching the students about the history of trebuchets, helping them fire small models, and showing them how the full-sized trebuchets functioned. This community outreach program began last year and is expected to continue in future years.

Perry is a strong proponent of this project as a way to teach students in a non-traditional way. “What it actually does,” said Perry, “is it really focuses on the four Cs–it’s learning that goes beyond physics.” He accented that the project not only teaches the students the physics behind the actual trebuchet devices, but it also teaches students presentational and kinesthetic skillsets. Due to the many things that it teaches students as well as its popularity with the students of HB, Treb Day will remain a school tradition long into the future.