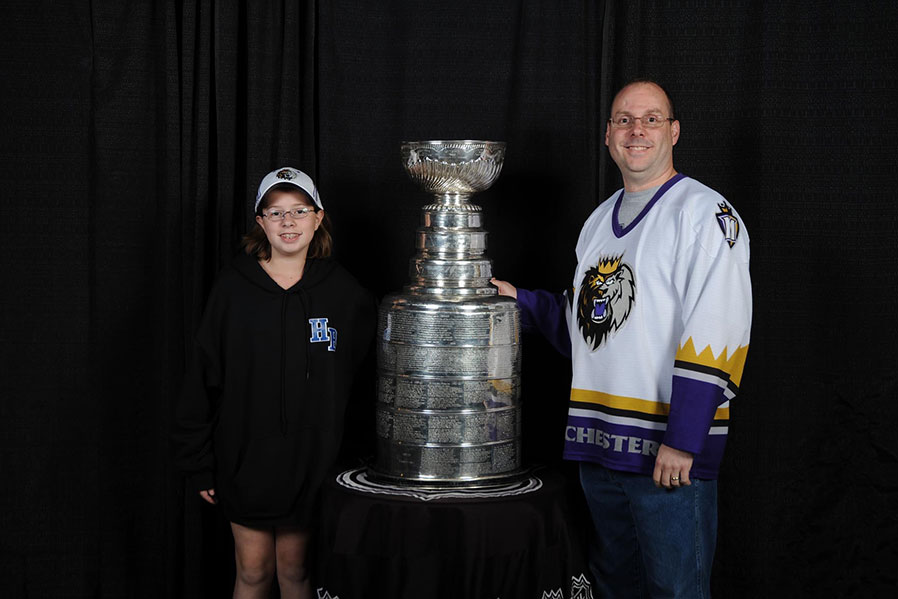 After waiting for almost 2.5 hours outside with all other season ticket holders for the AHL team Manchester Monarchs, the trophy shined under the lights. Emily Mitchell ‘18 and her father take a photo with the Stanley Cup won by the LA Kings in 2012.

The NHL season kicked off on October 4th, 2017.The regular season will end on April 7 with the Stanley Cup Finals starting shortly after. While the season started only two months ago, there have been many teams who have put together great starts. Last year, the winner of the Stanley Cup was the Pittsburgh Penguins, who had won it 5 times prior.

In New England, most people support our only NHL team, the Boston Bruins. Their current standing is 8-2-0( Wins-Losses-Ties). In the Atlantic Division, they are in third, behind the Toronto Maple Leafs and the Tampa Lightning.

In all of the National Hockey League, many of the 31 teams have been doing well in the standings, such as the Columbus Blue Jackets (6-4-0), St. Louis Blues (5-4-1), Los Angeles Kings (8-1-1), and the Tampa Bay Lightning (7-3-0) which are some of the top teams as of right now. There are other items that factor into the standing of teams as well, not just the games won and lost. There’s the number of games played and points scored, which both have an effect on the ranking of teams by ranking them by the highest amount of points.

Within the past few days, the records and top teams in the division have been changing, but I think within the Pacific Division will not change as much as the season continues. The LA Kings will likely hold their spot and advance, as long as Jonathan Quick is not injured like the previous year and they keep a tight formation. Quick has been a goalie for the LA Kings since 2005, and has played for 2010 Winter Olympics. He had been awarded the Most Valuable Player award back in 2012, and was the most recent goaltender, goalie, to win.

Despite only being two months in, teams are working hard to ensure they are guaranteed a spot in Stanley Cup Finals. The teams that make the Stanley Cup Playoffs are the top three from each division and the remaining four are the next highest finisher in a conference. Some teams are  trying new strategies while others will be revamping old ones to make sure they are the best they can be. The standings will likely change as more games are played throughout the 2017-2018 season. “I don’t know a lot about hockey, but I think the standings will change because they have just recently started the season.” said Emily Dahlstrom ‘18. Perhaps one day, students of Hollis Brookline will be skating on the ice to have their name carved into the Stanley Cup.