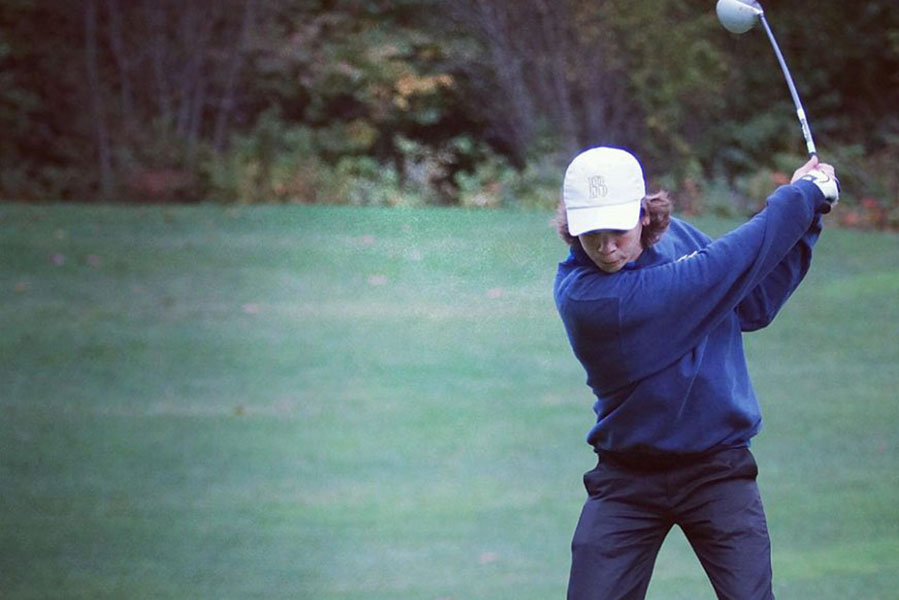 MacDonald ‘18 focuses intently mid-swing. With respect to his love of golf, MacDonald said “I love golf because I get to go out and have fun playing the game I love with my friends.” Picture by Rindress MacDonald.

Making top All-State teams can be an intimidating challenge for many high school athletes, especially for aspiring college athletes. Patrick MacDonald ‘18, however, has taken his golf related successes in stride, placing 3rd in the top Golf All State team both this year and last year.

Macdonald has been golfing for the last five years now, initially inspired to pick up the sport from watching Tiger Woods on TV. Though he reportedly found golf to be  “quite difficult” at first, he has since developed into a formidable golfer. His love of the sport has driven him to practice diligently and has inspired him to pursue golf at the collegiate level.

In preparation for making this year’s top Golf All-State team, a team consisting of the top six high school golfers in the state, he said he simply “practiced a lot” and didn’t let the nerves get to him. In response to whether or not he had any doubts beforehand, he stated that “I just played my game like I knew I could.”

One of MacDonald’s comrades in golf, Ian Mauch ‘18, said that MacDonald “was a valuable player on the [school] team and carried our team throughout the season. He definitely deserved to make All-State.” Another peer of MacDonald’s, Nick Shepard ‘18, has said of Patrick that “he is the best golfer I’ve seen on the Earth.” This high praise appears well-deserved in light of Patrick’s continued golf related accomplishments.

MacDonald looks forward to golfing more intensely in the future, especially at the collegiate level. With respect to potential colleges he’s considered in order to golf, he stated that “I am currently in contact with the golf coach at Bentley University and there is a good chance that I [will] play for their team in Division II NCAA if I end up going to that school.” MacDonald has certainly set a high golfing standard for himself during his high school career, and one can only expect him to see continued golfing successes into the future.