Who is Dave Umstead? 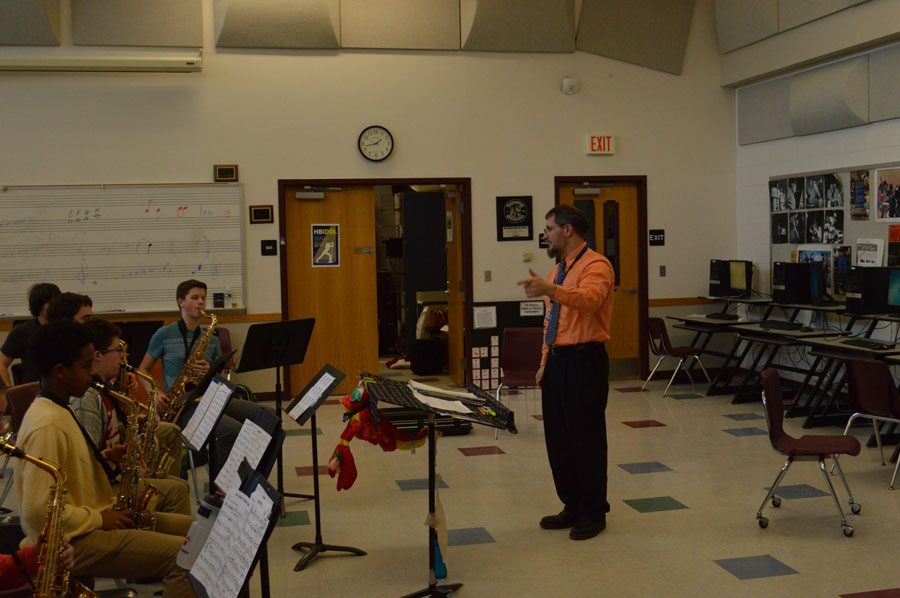 Mr. Umstead starts off every class by informing the students on upcoming events, news, local gigs and events, or even going over previous concerts or workshops. During his seventh period Jazz class he discusses the upcoming UNH festival and the extra tickets he has for students who are interested.

Behind the set of the rather recognizably characteristic doors of room 329 is one of HB’s friendliest faces. Whether you’ve had David Umstead as a teacher or not, it is likely you know how well respected he is throughout the school. His students have nothing but extremely high praise for a man that is far more than just the band director at HB.

Umstead is an incredibly upbeat, humble, and a down to earth Philly sports fan, who is remarkably more to his students than only a teacher. Amy Norton ‘19 readily describes him as a “friend” who is “the one teacher you can go and talk to about anything”. But despite his relaxed nature, he is someone who describes himself as “loyal, fiercely loyal even, and dedicated.” These qualities that he very clearly portrays through his immense dedication to his students’ success and the loyalty to those who he either plays with or conducts, from small things like never having called in sick while working at HB to “encouraging students to pursue opportunities like auditioning for all state,” explains Amy Norton.

For his students, he goes above and beyond, like Norton who says, “not only does he give me trumpet lessons but he also teaches me composition. I bring my laptop to lessons and he gives me the most meaningful advice and ideas. That has helped me a lot.” Or for Nick Franzini ‘18 who wouldn’t have been able to pursue guitar his Freshman year if it were not for Umstead helping him get into Jazz band which would later allow for Franzini to pursue bass. Fellow music teacher, Mr. Barbosa, explains “Dave Umstead is, simply, everything you could want in a teacher. He is ferociously caring, admirably humble, and selflessly loving…He demands a high quality work ethic from all his students without sacrificing the humanity, care, and ethos of what we do as young artists.” It all stems from this overall caring, for everything that he is involved in and everyone he is involved with; this outstanding drive to provide more.

The intense number of accomplishments the HB music program has earned are an attribution of this sort of dedication that goes far beyond the minimum requirements of his job. But to Umstead, contributing everything he has is his personal minimum. From the moment you first walk into the band room, you can’t help but notice the lines of trophies and musical awards dedicated to HB bands year after year, from Toronto 2012 to Washington D.C 2017, all awards of excellence.

However, Umstead makes it very clear that while he supposes he must take some credit for the success of the bands, he considers himself to be more of an equal member with the student musicians. While he makes a compelling point, the lengths at which he goes to, not just provide meaningful feedback but to create a family like environment in which students can act themselves and being there for everyone to help them reach their potential is for his friends and students much more than just being a teammate.

Furthermore, his dedication and his self described “great deal of will power” exceeds just those who have been under his direct tutelage for all four years of high school, as Umstead does not only direct the Concert Band, Jazz Band, Honors Jazz Band, Guitar I and II classes as well as advise student run groups like Pep band, Jazz combo, and Wind Ensemble, but he also serves as the head of the music department for HB.

“Beyond being the band director, my job includes acting as the Unified Arts Department Chair which includes art, the foods classes, family consumer science and even the P.E department,” says Mr. Umstead. He essentially relays information from all those ‘mini departments’ to all the department chair meetings with the administrators. “It’s important to note” says Mr. Barbosa, “that a large reason I am here in the first place is the space that Mr. Umstead has already established for the performing arts here at HBHS. His leadership, direction, and extra work has already established the rich and respected experience our department is known for within the school and larger community.”

As far as curriculum and extracurriculars that is more or less music based for Umstead such as planning trips and events like bringing our bands to the UNH Jazz Festival, Large Group Festival, the Jazz Clinic, or Souhegan Jazz Night. “We just always seem to have things on the agenda right? That whole administrative piece of my job, that you’re a student, you come to my class, and you are in rehearsal all the time, well I would say that is not the majority of what I do,” said Umstead. He spends the majority of his time as an educator getting ready for events and trips. For example, he and Barbosa are putting the entire itinerary together for the New Orleans trip this year, saying, “I was just dealing with emails with restaurants in New Orleans, all kinds of out there things, go and study music and the next thing you know you are calling restaurants in New Orleans to make reservations for thirty.”

But Umstead still has time to kick back and pursue personal projects. He said “You know, even though I am dealing with music all day, I get selfish in my free time. I practice for myself, I play in groups, I practice, I try to make myself better, I try to compose, but it’s been a little while since I’ve have done that, although I’ve started back up recently.” Perhaps the most interesting thing about this teacher whose accomplishments are so under the radar, is that Umstead is a highly esteemed, talented, and a polished musician. Umstead has been in many different groups throughout the years and as of right now, he is in a funk group known as Jalopy, a jazz group called Standard Fare, and a group he just recorded with on Saturday known as Chronic Jazz Syndrome, who he has been playing with for over ten years.

But outside of everything musical, Umstead loves to exercise, which during the school year he feels as though he has to neglect some, but hits the weights and runs as much as he can in the summer. “Other than that I like to relax, you know? Just kinda surf the internet… I don’t really watch a lot of TV but I do like watch movies so when I actually do have free time I do like to check out movies, definitely,” says Umstead.

Our school has been more than lucky and certainly more than just fortunate enough, to have someone who is “willing to go the extra mile and expand our program opportunities, collaborate on unique trips and performances, and showcase the value of musicianship, artistry, and hard work to the human spirit,” said Barbosa. For Umstead, it’s about following through, not about perfection, having the most experience, or being the world best musician. It’s about following through, putting everything you have into what you do, and for everyone here involved in music or who has just stayed around for a chat with one of the nicest people around, Umstead has more than followed through for us all. So for what it’s worth, thank you Umstead.