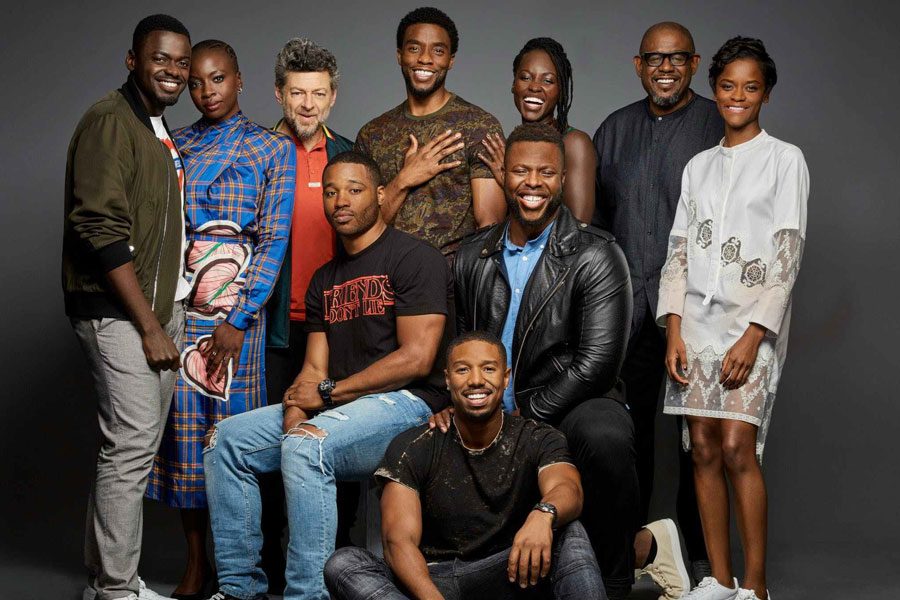 The highly anticipated Marvel movie, Black Panther, was released in theaters last Friday. The movie is being met with incredibly positive feedback, earning a certified fresh rating on Rotten Tomatoes of 97% among all critics, and an astounding 100% among top critics. The movie holds the second-highest four-day box office total ever, behind only Star Wars: The Force Awakens. Not only is Black Panther satisfying for superhero fans, but the racial equality themes it carries make it a must watch.

Ryan Coogler (who has also directed the critically acclaimed movies Fruitvale Station and Creed) has outdone himself on this cinematic masterpiece. The movie boasts a star-studded cast that is predominantly black actors. In fact, outside of Ulysses Klaue (Andy Serkis) and Agent Everett Ross (Martin Freeman), every main character is black.

Set in Africa, the citizens of Wakanda hide a utopian kingdom from the rest of the world, sitting on an endless gold mine of the fictional metal “vibranium.” The 18th installment of the Marvel Cinematic Universe, Black Panther not only tells a fictional superhero story, but, as it’s set present time in the real world, represents power and strength at a time where African-Americans face so much discrimination and are almost always portrayed in pop culture (movies and TV) as facing obstacles and struggling.

The cast is headed by Chadwick Boseman as T’Challa, the King of Wakanda. T’Challa’s character development and growing maturity as he learns the ropes gives the fans a character you just can’t help but love, who should fit in to play a main character in Marvel’s upcoming movie: The Avengers: Infinity War. The main villain, Erik Killmonger (Michael B. Jordan), has one of the best back stories I’ve seen out of a Marvel villain, and it’s hard not to at least recognize his point of view.

To say Black Panther is a cultural phenomenon would be an understatement; it was the third fastest of all time to reach $500 million at the box office, behind only the two hit Star Wars installments Force Awakens and Last Jedi. “It most notably becomes the 10th-highest-grossing movie of all time in North America after just 17 days in theaters,” said Paul Dergarabedian, senior media analyst for comScore.

Black Panther certainly doesn’t miss when it comes to sights and sounds. The soundtrack was produced by perhaps the most popular rapper currently, Kendrick Lamar. “I personally haven’t gotten a chance to see the movie, but I was a big fan of the soundtrack and music style. I really liked ‘Big Shot’” said Dale Jacobs ‘19. The movie’s visually stunning, as per usual from Marvel and Disney. When it comes to effects, it’s a superhero movie, there’s a cheesy scene or two, but it’s nothing that stands out.

Overall, it’s a 9/10 for me. If you haven’t seen Black Panther yet, go see it. The movie is receiving overwhelmingly positive reviews for good reason, there’s very little to dislike and a lot to love.