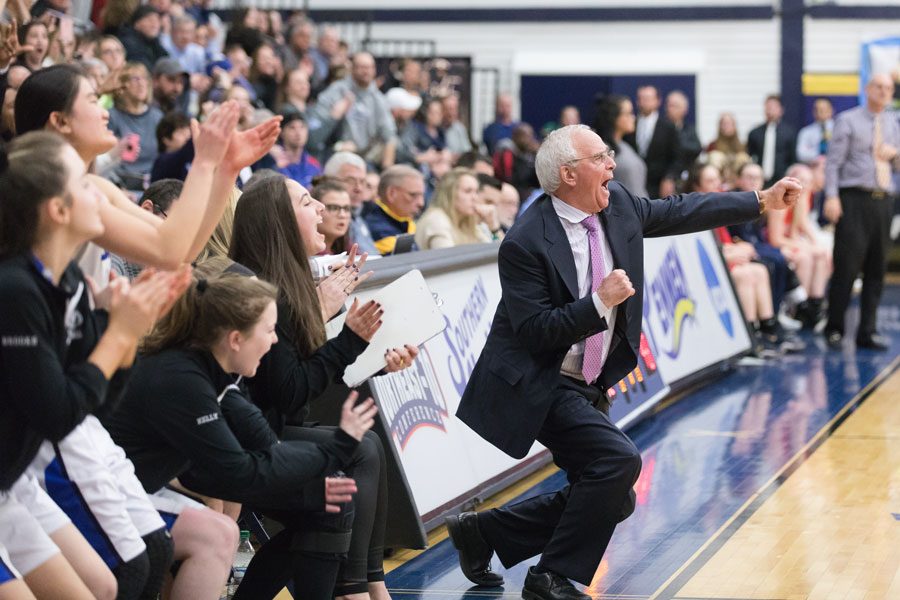 Coming off a loss in the championship game last year, the team started this season with four straight wins, and stayed strong through the rest of the year with only two losses overall. Going into the playoffs with a 16-2 record, they defeated Merrimack Valley and Pembroke in home games to advance to the semi-finals against Hanover. They started off the game down 9 to 4, but regained the lead and took off, eventually winning by 15 points.

At the highly anticipated final game, the team took SNHU’s court with force, leading John Stark by 16 at one point in the first half. But when John Stark caught up and regained the lead in a few intense minutes of play in the third quarter, the team was feeling nervous. “But I knew we play better than we were playing in that quarter. Once we called a timeout, we all came together and regrouped, and I knew that after that if we came out and we played like we had in the first half, we would be fine,” said captain Brodie Kelley ‘19. The girls broke from their huddle and took control of the game from then on, ending up 11 points ahead when the final buzzer sounded.

The victory was a sweet one for the team, especially since the title slipped out of their fingers at the end of last season in heartbreaking fashion against Lebanon. It seems as though last year’s loss helped the girls hit the ground running this season and play even better together. Captain Joanna Balsamo ‘18 said, “This year we were a more well balanced team. We had big contributions from everyone on the team, but we didn’t really just rely on one player.” It was obvious in the final that every starter was putting points on the board and contributing to the win. Balsamo was the highest scorer of the game with 15 points, while Christina Balsamo ‘20 had 14, Bodie Kelley ‘19 had 12, and Elizabeth Atkinson ‘19 had 9.

It was a satisfying end to the playoff run for the team, according to Balsamo. She summed it all up, saying, “We lost last year, so our whole goal going into the season was to make it back to the championship game and finish what we started.” And that was exactly what they did, cutting down the nets at the end of the night and bringing home the win for HB.