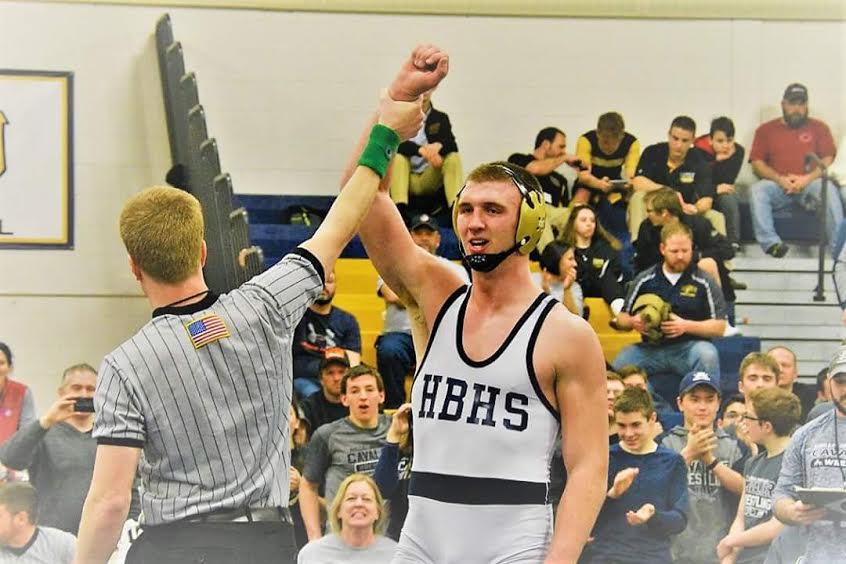 Sherwood is declared champion in a finals match this year. The presence of the white uniform, rather than HB’s typical navy blue, signifies that this match was a final, and would decide first and second place. “Seeing Clem go out and earn it, is a reinforcement to the fact that, you have to work for it,” said St. Pierre.

Hollis Brookline joined 12 other Division II teams at ConVal in the third week of February to close their season. Sherwood, a team captain, looked for his first win at the state level for his final high school championship.

“This is my first time winning D2’s. Freshman year I got fifth, and then sophomore and junior year I got second this was my third straight finals [match]. I was just so relieved that after three times in the finals, I finally did it.” said Sherwood.

After wrestling a few other opponents that day, Sherwood had climbed to the top of his weight class, 195 lbs, and took home the prize. A tough opponent from Milford took second to Sherwood. Both wrestlers qualified for the Meet of Champions where they competed against other state champions in a higher-stakes meet. Sherwood finally took on the other state champions just last weekend at the Meet of Champions on Feb. 24. He found more success, placing fifth overall, to close his high school career.

In previous seasons, Sherwood found a lot of success; just earlier this season, he secured his 100th career match win during a regular season meet.

Sherwood’s win claimed to be “well-deserved” for a “hard-working” kid. “He got himself in the All State Rankings and since then has just taken off. Well deserved, I’m really proud of him for it,” said longtime teammate and varsity team member Tyler St. Pierre ‘19.

“For Clem, it is kind of a culmination of four years of hard work and dedication. I think there was probably a little bit of a sense of accomplishment there… I think for him it made it all worth it,” says Coach and Athletic Director Brian Bumpus, who coached Sherwood during all four of his high school seasons. Coach Bumpus awarded him with team MVP at his final sports awards with the wrestling team on Mar. 19.

With graduation quickly approaching, Clem can look forward to the next chapters of his life. Having sworn into service in the National Guard, Sherwood will take a year off of school to train. In the fall of 2019, he will start school at the University of Maine and major in engineering in UMaine’s CET program. At school, Clem will continue his career and join the school’s club wrestling team. “I think, for Clem, [college wrestling] would be great. For seniors, obviously, that are moving on, it’s great to see them continue on with wrestling… it’s definitely something he could be successful in. I hope for all of our guys that they continue on to wrestle in college,” said Bumpus.

The CavChron congratulates Sherwood on his accomplishments and career, and wishes him luck and more success in the future.