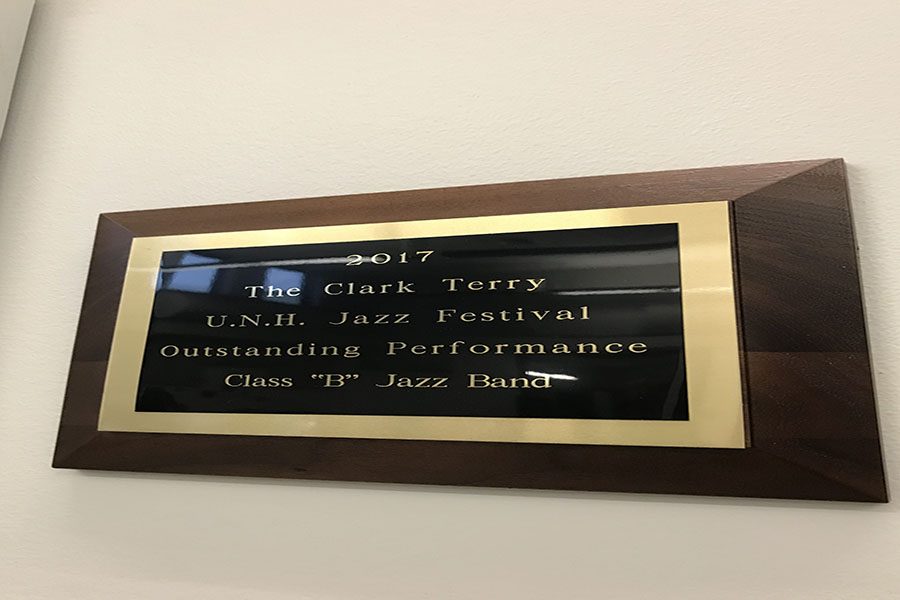 One of the first things one might notice when walking into the Hollis Brookline High School Band Room are the many trophies, awards and plaques lining the walls and shelves. Every trophy on display has been awarded to the band under the direction of Mr. Dave Umstead, who this past month may not have won another plaque, but was recognized once again for having one of the better jazz bands in the region.

On March 10, the HBHS Honors Jazz Band and Jazz Combo returned to the 45th annual Clark Terry Jazz Festival at the University of New Hampshire. Named in honor of jazz great Clark Terry, the festival hosts about 55 to 60 high school and middle school jazz groups from all throughout New England and New York. It is one of the largest scholastic jazz festivals in the Northeast. The festival also features high school and middle school big bands, jazz combos, jazz choirs, and solo vocalists.

The festival was certainly long for the Honors Jazz Band, as both the HBHS Jazz Combo and Honors Jazz big band competed in adjudicated performances which ranked them against other bands at the festival and remained at UNH the whole day. “It was pretty competitive,” said trombonist Jack Sinclair ‘19, “there were a lot of strong bands this year that came bringing the goods.”

The schools at the festival were divided into groups based on the student body size, which typically puts the Honors Jazz Band in group ‘B.’

The Honors Jazz Band has had it’s success at the festival in the past, scoring the ‘Outstanding Performance Award’ in 2015 and 2017. The band’s success at the festival in 2016 came after a year in which Mr. Umstead believes the band played it’s “best set ever,” but did not leave with an award. “I really wish we could’ve obtained that award two years ago,” said guitarist Isaac Wimmer ‘18, “but sometimes you’re met with success and other times total failure.” Honors Jazz was recognized with an honorable mention at the awards ceremony in 2016, but the plaque ultimately went to Rhode Island’s North Smithfield High School.

The pressure was on last weekend, though, as the band was already without two strong senior players for the festival. Isaac Wimmer ‘18, one of the bands guitar players and Liam Grant ‘18, the band’s first trumpet player on much of the setlist, did not attend the festival.

Despite the absence of the two impactful seniors, great talents like guitarist Steven Szczeszynski ‘20 and trumpeter Justin Surette ‘21 took over while the students weren’t there. Szczeszynski has been a member of the band since 2016, while Surette joined the band temporarily in place of Grant. “I think Justin is sounded great,” says HJB bassist Nick Franzini ‘18. “He really stepped up and did his job well in a time of need.”

Though this year’s jazz band did not include many of the seniors that made up the ‘Outstanding Award’-winning band last year and lacked some senior attendance, the group tried to find success at the festival for the second time in four years. After the combo and big band performed that morning, the band waited most of the day in anticipation of the awards ceremony in the Granite State Room at the Memorial Union Building. For group ‘B’ bands, Hollis Brookline was one of four bands recognized with an honorable mention, a serious accomplishment given the time of the band’s early morning performance and other schools they went up against.

The Honors Jazz Band’s setlist included the Thad Jones classic ‘Big Dipper,’ as well as the flowing ballad ‘I’m Getting Sentimental Over You,’ and Carl Strommen’s blues-shuffle favorite ‘Shortstop.’ The HBHS Honors Jazz Band and Combo should be very proud of their performances last weekend, as getting mentioned at such a large festival is no easy feat.

The last four years Honors Jazz has been recognized with two ‘Outstanding Performance’ awards and two honorable mentions at the UNH Jazz Festival, solidifying them as one of the area’s best high school bands. The group hopes to continue their winning trend heading into the future, as the current seniors who graduate this year leave spots for newcomers to shine.