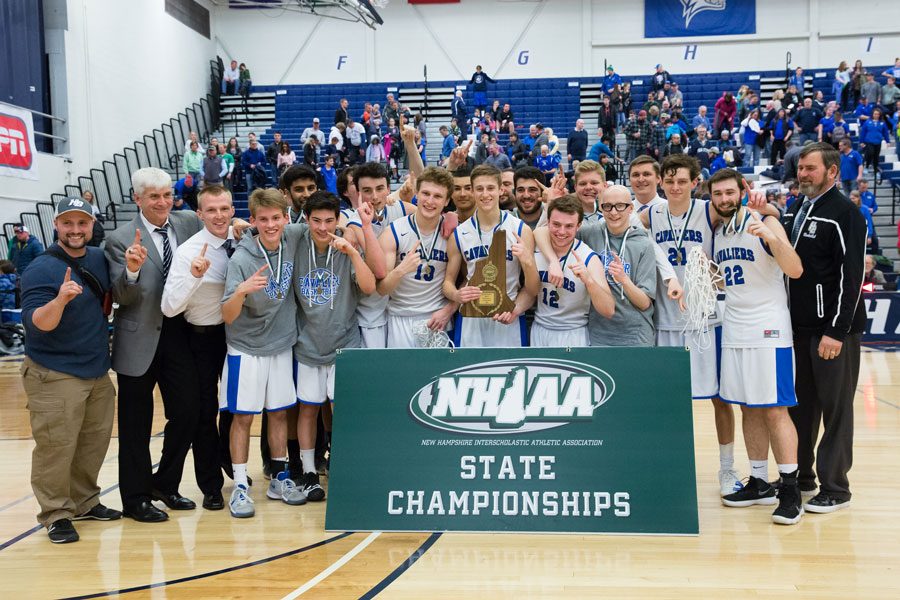 The boys pose with their medals after the game.

The 1995-96 Chicago Bulls had a motto to accompany their historic 72-10 season; “It don’t mean a thing without the ring.” As the final seconds ticked away at UNH last Friday, the Hollis-Brookline Boys Basketball team got their ring. The Cavs finished out their incredible regular season with HB Boys Basketball’s first championship title since 2005.

The Cavaliers put away the 7th seeded Oyster River Bobcats 56-40, a dominant victory that saw HB thriving by playing their post-centric offense rather than relying on perimeter shots and guard play. “We didn’t have to rely on making low percentage shots with an offense like ours. Especially with guys like [Matthew Dowling ‘18] and [Matthew Simco ‘18] inside, they’re gonna grab 25 rebounds a game to help us out,” said Scott VanCoughnett ‘18. Simco put up as many rebounds (19) as the entire opposing team in the championship. He was crucial to the team all season, standing out as not only the best player but also an incredible leader for the squad. “If we didn’t have [Simco] we would not have made it as far as we did, and we certainly wouldn’t have been the one seed. He led by example, and was a role model for the rest of us,” said Evan Simonds ‘19, who led the team in made threes and three-point-percentage. The height of the two teams clearly played a role in HB’s ability to control the boards on the offensive and defensive side of the ball. The Cavs’ two bigs stand tall, Simco at 6’3 and Dowling at 6’5. That size played a big role in their incredible season.

They followed up their 16-2 regular season with a solid playoff run, winning comfortably against Milford in the quarterfinals and Oyster River in the championship, but getting a bit of a nail biter in their semi-final game against Merrimack Valley. Valley can do damage from three point range, and even though the Cavs were up 12-2 after the first quarter, they were caught off guard by the “shoot to get hot” mentality from the opposition. Valley’s shortcoming was their size, said Simonds. “We were able to out-rebound them due to our size advantage, [Simco] and Dowling were able to dominate the scoring with their height advantage.” The Cavs managed to close out the game 46-43, but not without a last-ditch effort from Merrimack that saw a desperate heave that could’ve tied the game and brought it to overtime.

HB certainly wasn’t short on talent this year. Rounding out the starters was Grant Snyder ‘20 and Jonathan “JB” Brackett ‘18 at the guards, with VanCoughnett playing the 3. VanCoughnett was the unsung hero throughout the season, and Brackett had high praise: “He was always there to do the dirty work. [VanCoughnett] didn’t always show up on the stat sheet, but he was the glue that held us together.”

As for the sophomore, the future is bright. Snyder dropped 12 points in the championship (10 for 10 from the free throw line), and could be HB’s focal point in the years to come. “He plays the game the way it should be, a fundamentalist who rarely turns the ball over and can score in isolation ball. That’s a special ability to have, he gets buckets,” said Simonds.

Snyder wasn’t the only guard who got buckets this year for the Cavs, as Jonathan Brackett made his return to basketball in stellar fashion. Brackett had 9 points in the championship, but it was work on the defensive side of the ball, says VanCoughnett, that really benefited the team. “[Brackett] had the job of shutting down every team’s best scorer throughout the season, and he did just that.” The defensive mindset of the Cavs was evident, as only four players on Oyster River scored in HB’s 16 point victory in the championship.

The outright dominance wasn’t unfamiliar territory for the Cavs; they outscored opponents by an average of 13.8 points in their wins this season, while also winning 11 straight on their way to the playoffs. VanCoughnett was more than satisfied with the outcome: “We set goals at the beginning of the year, and this season we met them and exceeded them. Not to mention we had a lot of fun doing it.”