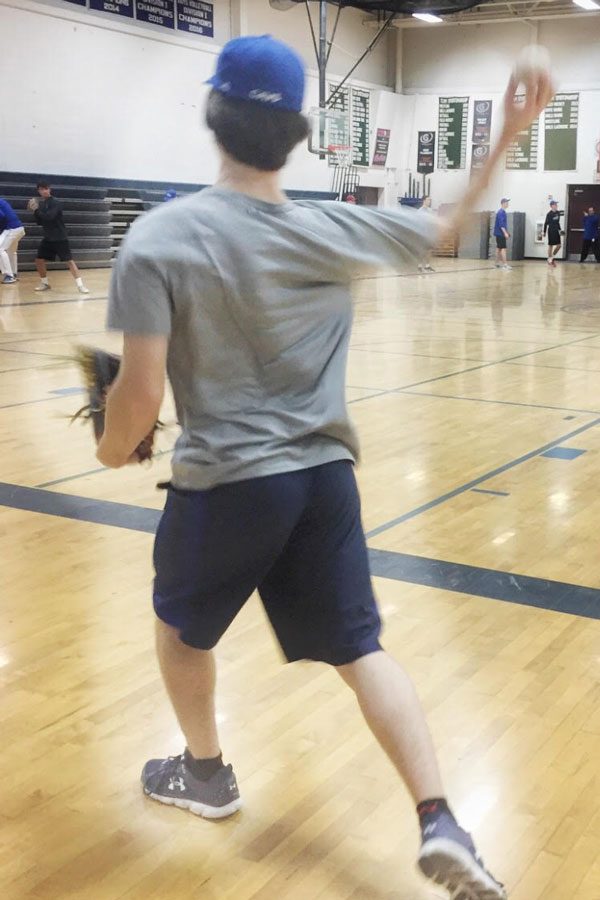 During tryouts, the boys baseball team prepares their base running skills in the gym, so that they can score ample runs this season. They paid close attention to coach Loftus as they would be called out if they didn’t watch closely. “We ring chasin’ this year. We’re winning the ship”, says HB’s Kaito Kramarczyk ‘19.

The boys’ baseball team kicked off their 2018 Spring season on Monday, March 19 with tryouts in the HB gymnasium.

With a tough ending to their season last year when the boys were cut short of the playoffs by one spot, the baseball team plans to start their season off with a vigorous offense and defense. “The key to a successful season for this team this year is to always plan a few steps ahead before every pitch. For example, who’s on base, what should I do if the ball is hit to me, etc,” says HB’s former varsity baseball player Nick White ‘17 as he gives the team advice. Each player needs to keep in mind their position and job in order for them to be successful on the field and make important plays.

Keeping the positive team chemistry the same from last season is what the boys are doing in the preseason to boost their chances for a playoff run this spring. “My hope is that we continue where we left off from last year. The team chemistry was great and we hope to improve that,” says varsity captain Tyler McDormand ‘18. The team has around 15 upperclassmen aiming for a spot on the team, and seven of them are returning starters which, with practice and teamwork, will set them up for success. “With many returning and experienced players we hope to make a deep playoff run and hopefully end up at Northeast Delta Dental Stadium [where the championship is played],” says McDormand.

Last year was the first season at Hollis Brookline for coach Rich Loftus, who formerly owned Nashua Baseball Academy on the Hollis Brookline border. Loftus has a different style of coaching baseball than former coach Ryan Coulter. Loftus is more old school and looks to coach his players to be gentlemen with great character. The one thing that Loftus wants his team to learn is “that baseball is temporary, but being good students and gentlemen is something that they’ll have forever.” Loftus’ main focus is to teach the boys about life before anything else.

With the senior catcher, Dan Leone, being injured, Kyle Hsu and Ian Mauch, catchers, will step up and rock the pitcher-catcher duo with Kaito Kramarczyk, Joe Messina, Kenny Corsetti, and Joe Brown, pitchers, from the mound this season. One aspect of the game that is the most important for success for the HB boys this season is, “if all pitchers pitch well. Pitching is the name of the game,” says Loftus. With the different combinations of these boys pitching and catching and the many years that they have been playing together, HB is sure to be an unstoppable force.

The boys are eager to get on to the currently, snow-covered baseball field as winter wraps up in New England and have a winning season for Hollis Brookline.