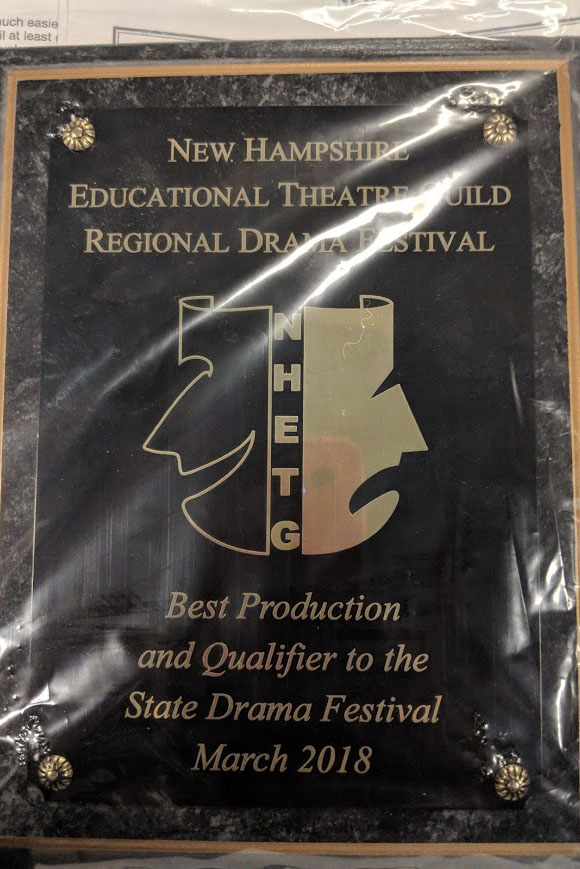 The plaque awarded to the ITS members for their state qualifying performance. “ITS has a bright future ahead for it, and I believe [attending the festival] will be something that will be happening every year.” said Matt Barbosa.

The latter half of the third academic quarter was eventful for the Hollis Brookline High School theater department, as just a short week after putting on a fantastic production of Joe DiPietro’s ‘All Shook Up’ for the spring musical, they were back to work. This time, they would not be performing for an audience at HB, but for a statewide competition. On March 31, 2018, a few members of HB Drama performed the one-act play ‘Buried Child’ for the 2018 New Hampshire Educational Theater Guild regional festival in Laconia.

This year, HB’s members of the International Thespian Society decided to take a one act play to the NHETG Theater Festival to compete in order to  win at a regional level, hoping to advance to states, and later the national level competition. Performing at the festival for the first time last year, the ITS performed a comedy written by a companion of theater director Mr. Gregory Parker. The actors performed well in 2017, but ultimately did not win the incredibly competitive local competition.

This year however, performing Sam Shepard’s more dramatic and artistic ‘Buried Child,’ the HB thespians won the local competition with ease. The 2018 regional festival had HB’s ITS members acting against fewer schools, but the competition was still higher than ever. “It was student acted, directed, and arranged,” said theater veteran Joey Schunemann ‘18, “all the plans were set out by students here at the school within the International Thespian Society.” It has been a busy few months for Schunemann especially, as he not only acted in the festival and the spring musical but is also directing ‘Fourthies Fight Back,’ one of the two one act plays HB Theater is performing for the spring play on May 11 and 12.

Along with Schunemann, ‘Buried Child’ starred ITS members Franklin Pugh ‘18, Patrick Grimes ‘18, Lorenzo Occhialini ‘20, Nicole Plummer ‘19, Sam Price ‘20, Alex Meagher ‘19, and director Audrey Solinas ‘19. Though the thespians won at the regional level, due to student conflicts for dress rehearsals on the day before the state competition, the ITS members were unable to attend the festival within the guidelines of the NHETG.

Matt Barbosa, choir teacher and theater director said,“[the festival is] a testament to Mr. Parker and the ITS members, who doubled up and were preparing this entire play while they were in the throws of trying to get a musical together with all the snow days that we had. This was a whole other show they were learning on top of it.” Even with the stress of putting on multiple productions at once with limited rehearsal time, HB’s evolution since the last festival was remarkable. “We went from ‘lets go see what this is like and if we can compete’ to ‘hey, we’re one of the top groups and we made it into states!’” said Barbosa.

In the eyes of Parker and Barbosa, the International Thespian Society has a bright future looking forward and both believe attending the festival will be something they will do every year.

As for the results of the festival, it was Concord High School and Kingswood Regional High School’s theater programs that ultimately won best production and qualified for the New England Drama Festival, set to be held at Gilford High School in late April.