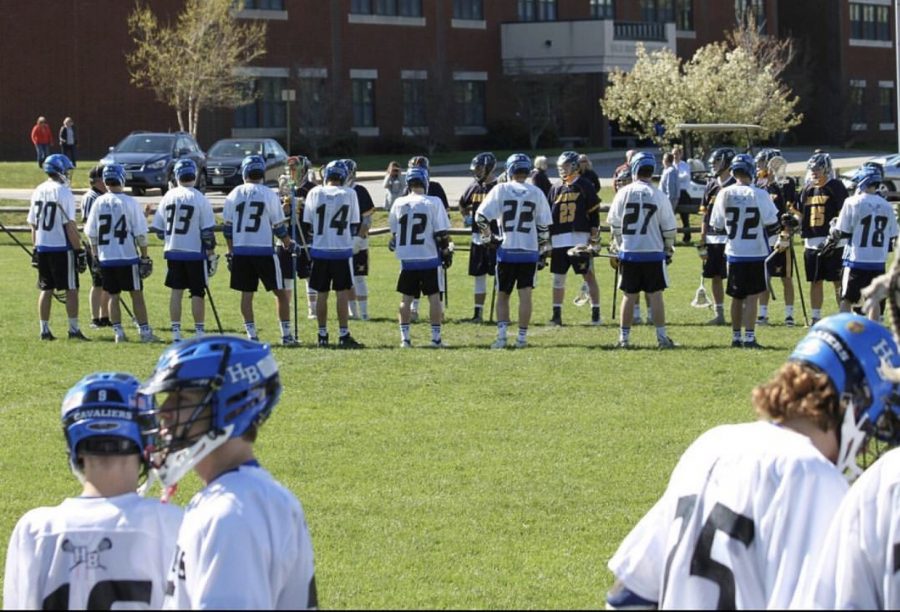 The 2016-2017 lacrosse team lines up against Bow last season. They made Final Four, but Johnathon Kroposki, ‘19, says “This year we can win it all.”

Despite the loss of senior players, the Hollis Brookline Boys Lacrosse team is still looking to maintain excellence this season. In Coach Rich MacDonough’s second year, he is looking to create a long lasting culture of success that allows his team to thrive in their playing style regardless of personnel changes.

The team has had a rigorous preseason training schedule. “We’ve had skills sessions and weight room 2 times a week. We’ve also had indoor league on Sundays. It’s important to go and get better,” said Mike Atlas, ‘18. The indoor league is played at the Bedford Sportsplex, mostly on Sunday mornings. Jonathan Kroposki, ‘19, said “We did alright for the amount of young talent we have on board this season. It is certainly great prep for the season.” As for the season’s expectations, he added, “The expectation is always a championship. Derryfield will be a tough opponent as usual, but we could definitely break them down and find their weaknesses. Matt Passamonte playing the X [an attack position] could expose them.”

Youth is a serious theme for the boys this season. “We graduated 10 seniors last season, many of whom earned All State honors. We’re very young this year,” said Coach MacDonough, adding that they’ll, “be looking for significant minutes for a number of freshmen and sophomores, including Quinten Wimmer, Joe MacDonough, Sal Fabbio, and Chas Dean. We have a very young team and need a lot of reps together to build the team back up.” MacDonough also complimented seniors Ryan Olson, Jack Aldana-Proulx, Garrett Maloney, Matt Passamonte and junior Jonathan Kroposki for their leadership so far this season. Last season, Aldana-Proulx was 1st team All State as a defender, Olson was 2nd team All State as an attackmen, and Maloney was 1st team All Telegraph as a goalie. Passamonte is a second year starter who notched 20 goals last year. Kroposki mans a fresh midfield and is in his first year starting.

Having an entire midfield that is so young can be challenging, but Atlas doesn’t seem worried. “We have to rely on Seniors to lead by example and the young kids will follow. I don’t see a specific kid that will be a star but collectively as a group the young kids will pull through.”

As for the girls team, there is new leadership this year. Jim Maxwell, who was an assistant coach for the past two seasons, has taken the reigns as the head coach this season. Despite shaking things up a bit and losing some solid seniors, spirits are high, as are the expectations for this spring. The girls are looking to have a successful season but know that it can’t happen without sacrifice.

“Everyone is hustling. We do plenty of sprints. We’d rather not have fun in practice and win later on, than mess around and lose in the long run,” said Rachel Ash, ‘19. It is clear the team has been conditioning hard. Elise Bender, ‘19, elaborated on how much the girls are really doing. “Our prep started in October. We played wall ball every Tuesday just to get together and bond. Weekly Facebook challenges were posted, and the winner got a prize. It was a great way to get all involved. We worked out with TOP Fitness of Nashua every Saturday beginning in January. To get some live action we played in the dome every Sunday.”

The girls team, much like the boys, is comprised of young players. They have just one senior, Celeste Fetter, who is committed to playing D2 lacrosse for Pace University in New York, and is a driving force for the team both on and off the field. “She is a real leader and a fun girl to be around. Her value to our team is immeasurable,” said Reagan Berry, ‘19. Berry and Fetter are two of the four starting midfielders, with Victoria Bruzik ‘20 and Tasha White ‘20 by their side. While this unit is young, it is loaded with talent and expected to be one of the better midfields in D3.

The girls also feature a strong attack headed by Bender and junior Kelsey Sweeney. Returning defenders for the squad who will make an important impact are Caroline Smith and Dana Ulrich, both ‘19. The junior class will need to come up big for the team this year, there’s no doubt about that.

The boys continue their season with Windham and St. Thomas Aquinas this week, both away games. The girls are set to go against Kingswood and Milford.