The art of equestrianism 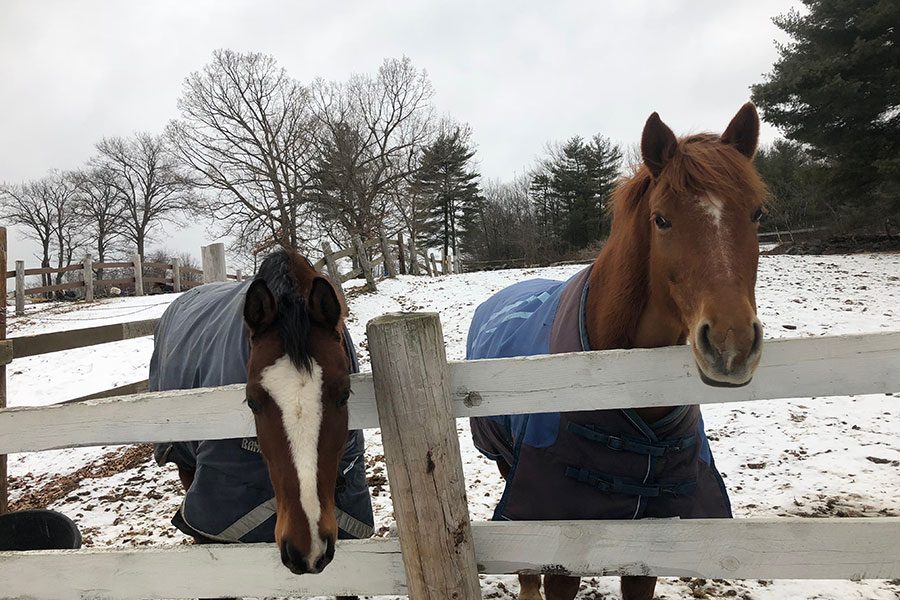 Ponies Winnie and Peanut wait excitedly to be brought inside for dinner. Horseback riding is all about the relationship between the horse and rider, where both parties do an equal amount of work, just in a different fashion. “Our jobs are different. I’m focused on location, I’m focused on striding, I’m focused on my test. I do a lot of the behind the scenes stuff,” said Laura Considine ‘20.

At times when the integrity of sports is brought to the table, there is always someone that claims horseback riding, a broad term which encompasses easily 50 different disciplines, is not a true sport. Horseback riding is indeed a sport, and one of the most dangerous in the Olympics at that.

First of all, what are the characteristics of a sport? According to the Merriam Webster Dictionary, a sport is anything which requires physical activity and technical skill, which can be showcased in a competition for the audience’s enjoyment. Equestrians Laura Considine ‘20 and Alyssa Lapierre ‘20 defined a sport in a similar fashion. “A sport is anything that requires physical activity and a technical skill,” said Considine.

Generally, when people insist that horseback riding is not a sport, their first argument is that it does not require physical activity. They ignorantly say that the horse does all the work, and the rider just sits there. As equestrian Rachael Brown ‘20 put it, they could not be more wrong.

Believe it or not, horseback riding actually takes a lot of physical fitness, from both horse and rider. Riding stimulates muscles all across the body, from the calf muscles to the abdominal and back muscles. In fact, according to “Why Should You Learn to Ride?” by The Spruce, horseback riding not only provides a full body workout, it also encourages increased internal organ function, just like walking and running.

Emily Sumner, an experienced horseback riding instructor at Contry Hill Farm, emphasized the importance of leg strength in riding. “You have to be able to give a very subtle squeeze with your leg and keep it still. If you progress up to a trot, you have to [have] the leg strength to hold all of your weight and do what is called posting… You have to put all your weight into your legs without moving them or slamming into the back of the horse,” said Sumner. She also pointed out that horseback riding requires the same amount of stamina, or more, than traditional sports. For example, in the discipline of competitive trail riding, horses and riders must be able to ride for 100-plus miles continuously.

Furthermore, Sumner described the fitness needed at the other gaits, as well as beyond the trot. “Even in the canter you have to keep your leg still and move with the horse with your hips. You have to be able to keep your hands perfectly still so you aren’t pulling on the horse’s mouth or giving them any cues that aren’t supposed to be given. You should probably hope the horse doesn’t try to buck you off or take off at a gallop with you at any given moment,” said Sumner. 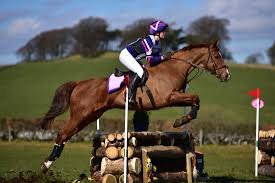 Sumner went on to explain that athleticism is a key part of communicating properly with the horse. Signals to the horse must be subtle and invisible to the audience, meaning that the rider’s form and position cannot change, all while controlling an animal with a mind of its own. Proper fitness can help prevent injuries caused by miscommunication. “If you are not athletic, the chances of you being unable to do it well are there. You can become physically injured easily if you aren’t physically able,” said Sumner.

Although, as Considine points out, at the base levels of horseback riding, specifically eventing (a discipline she has been competing in since she was five years old), anyone can compete. Just like any other sport, as the levels increase, a greater fitness level is required. “Once you get to training level and above, you have to have strength and endurance. I personally run in the mornings during the summer to keep myself fit and I also go to gyms… to make sure I am competing at the highest level I can,” said Considine.

Horseback riding requires an incredible level of physical fitness, even if it can be difficult to observe. In competition, the goal is to make all the movements look easy, so a spectator cannot see any effort from the rider. The crowd does not see the amount of work behind the scenes. “It is easy to look at a picture of someone who is out on a hack with their horse and say, well, that doesn’t look like a sport. But they aren’t looking at pictures of Phillip Dutton on a four star course at Tryon, it’s not the same thing,” said Considine.

The second component of a sport, skill, can also be obviously found in horseback riding. The balance between the horse and rider is very delicate. It takes immense skill to effectively communicate with a horse, all the while making it look like perfect to anyone looking on.

Sumner nicely outlines the beautiful relationship between a 1,000 pound animal and their human rider, a relationship based off of skilled communication. “[R]iding… is a partnership. Unlike any other sport, [where] the athlete focuses on just themselves, horseback riding is a more difficult sport. It requires athletes from both the rider and the horse,” said Sumner. This partnership involves subtle squeezes of the leg, light changes in rein pressure, the unnoticeable shifting of the hips to turn or balance. The rider can never force the horse into submission, the horses are animals with minds of their own. Instead, the partnership is more of a dance, the horse and rider moving as one unit.

She continued on to explain how the skill and relationship between horse and rider is just as important as the athleticism. “At the top levels in the Olympics, you might see an athlete who is well-qualified but cannot compete because they don’t have a horse able to do it. You could be the most athletic rider in the world, but if you don’t have the right horse, you can’t do it,” said Sumner.

Next time students are quick to judge the sport equestrians partake in, remember, there is a large amount of athleticism and skill involved, even if it is invisible to the bystander. Take Sumner’s advice and “give it a try and see how [your] legs and back feel after 10 minutes.”