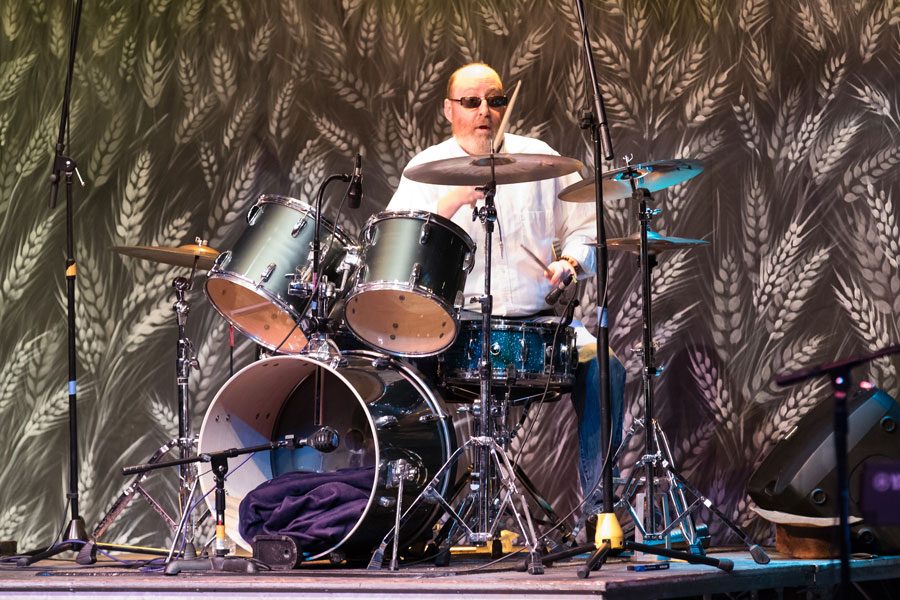 Eric Perry mans the drums at the December Guitar Night. Perry performed in the Spring guitar night as well, and you can expect him to perform for years to come. “When I first started I was a bit nervous, but the more I put myself out there the more comfortable I got, it’s a great opportunity to collaborate with students,” said Perry.

Science teacher Eric Perry is currently in his third year as a Hollis Brookline High School teacher, while social studies teacher Gregory O’Brien is in his first; nonetheless, both teachers have quickly grown to be student favorites and have a unique history in the field of performing arts.

Before Perry was the jokester and caring physics teacher he is today, he was living out his dream as a rockstar. Perry started his music career for a high school band where he played the drums. His love of music only progressed, and Perry eventually found himself in the band “Showdown”, which opened for Rick Derringer. Altogether, this band is where he spent six years of his music career.

Perry’s passion for music has led him to try new instruments and become an integral part of Guitar Night. “I’ve found more and more he’s a high schooler in a man’s body. He’s here to have fun. He can play any instrument you ask him to, and have a lot of fun doing it,” said Joe Messina ‘19.

Math teacher Mark Illingworth has annually captured the attention of the HB audience with his stunning performances at guitar night, but he plans to retire this spring. His final Guitar Night is set for May 5, but he, along with the HB community, can rest assured knowing Perry will continue the tradition for years to come.

O’Brien on the other hand, has a different, yet just as impressive, history as a dancer. Growing up, he was surrounded with sisters who loved dancing, which eventually led to him picking up the sport after high school. In college, O’Brien started the “Second Hand Dance Company” with a few of his friends. Despite originally wanting to be a singer, the Dance Company was a huge success. What the group lacked in funds, they made up for in talent and creativity, making their flyers and costumes out of recycled materials such as plastic bags and scrap papers. For over 16 years, the group performed for an estimated 1.5 billion television and theater viewers worldwide, and even performed for a massive audience on the Late Show with David Letterman. O’Brien no longer dances, but he has still stayed connected to the sport by teaching kids at a summer camp over the last couple years.

Performing arts can seem like an intimidating field of work, but both teachers personify what it means to work hard and chase their dreams. “When you do something just for the love and passion of it, everything will work out. If you have persistence, luck, and talent, you will always have a shot at doing something big” said O’Brien. For Perry, music will always be a passion and he plans on continuing to spread his knowledge for years to come. “Music is a lifelong passion, but making it a career can be difficult. But if you really embrace it, it will open up opportunities to meet new people and grow.”