All about All States 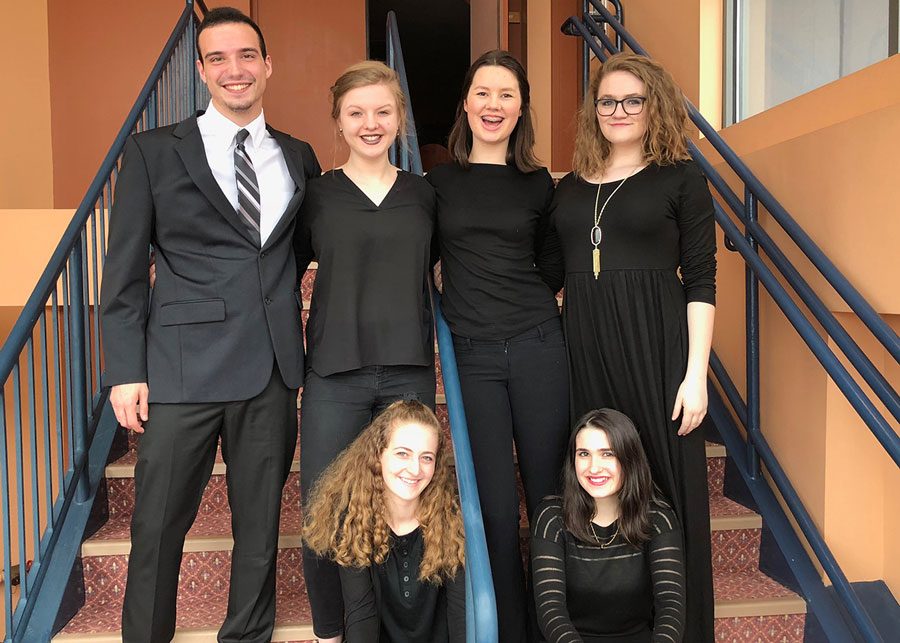 All-State chorus members from Hollis Brookline High School pose outside the festival building in Concord, New Hampshire. The students were very happy and honored to be there and to perform amongst such talented individuals. “I always viewed students who got into All-State, in previous years, as exemplary musicians, so to be a part of it was a true honor and privilege. It meant my hard work to get in paid off,” said Samantha Price ‘20.

On April 12 to 14, talented student musicians from all across New Hampshire traveled to Concord, NH for the Spring Conference & All-State Music Festival, showcasing their various impressive musical talents in band, orchestra, and choir performances.

As expected, the festival is extremely difficult to qualify for. In fact, according to Nithipalan, students should begin practicing for the festival itself months ahead of time if they want to perform at the top of their game. “When I initially tried out for All-State, I was extremely nervous because an extensive amount of music students across the entire state auditioned with all different performance levels, so the probability of actually getting in is quite slim and very challenging,” said Price.

Orner echoed that sentiment, saying that the auditions were very nerve-wracking, but definitely worth it. Even Nithipalan, who auditioned and performed at the 2017 Spring Conference and All-State Music Festival, admitted that the flute chair in the festival is extremely competitive.  It was definitely a worthwhile endeavor for both her as well as Orner who states “[The All-States Festival] makes me feel better about myself, especially for flute which is a really competitive instrument. Being able to get into the band is already a good thing, [and] I also got into Chamber which made me feel good,” she said.

Every year, the music pieces are challenging and often require a significant amount of practice before the performance date. This year, Orner practiced her music with her voice coach in order to prepare herself. On the other hand, Price “practiced [her] music by playing it on piano by [herself] and listening to the part recordings the Festival provided.”

However, all the hard work certainly paid off for the musicians. According to Nithipalan, unlike the school band and choir, the festival is only made up of the best of the best and according to Price is“an honor and privilege” to perform in, Price always thought the members of the All-States Chorus were “exemplary musicians” and was proud to work with them.

Nithipalan was also impressed by the talent in the bands. “So the difficulty is higher in the All-State band. The people there have more experience and know what they are doing. It is a better experience overall,” said Nithipalan. However, she also mentioned that “they chose music this year more on musicality. The technical stuff wasn’t difficult. The director worked a lot more on the spiritual aspects or musicality.” Overall, Nithipalan thought the festival was a great experience.

For next year, the 2018 All-State band and chorus members encourage the students planning on auditioning to really give it their all. “Some advice I would give to future students trying out for All-State is try your best, work hard, and never give up. Auditioning for All-State is a very arduous task, but if you put all your effort into it and try your hardest, it doesn’t matter if you get in. No matter the result, you learn so many lessons along the way,” said Price. With such an excellent year for Hollis-Brookline Allstate members it leaves us wondering, what will come of next year’s All-State festival?