April Break in the Big Easy 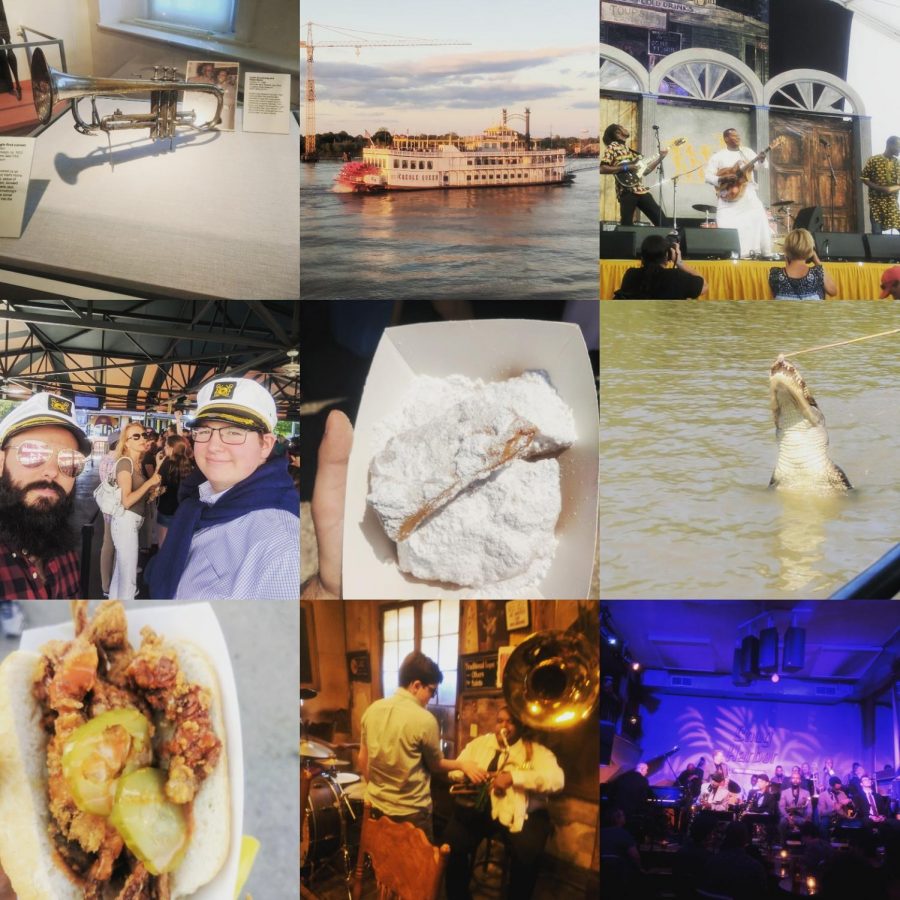 “It was a unique experience that makes me want to go back there [to New Orleans] and learn more about the music culture and history,” said Frank Pugh ‘18, an Honors Choir student on the trip.

Over April break, twenty-nine Hollis Brookline band and choir students traveled to New Orleans to experience the music and culture of the city. The trip, which was planned by the music department, centered around the jazz culture of New Orleans, and included many musical events as well as general sightseeing.

On the week-long trip,students attended New Orleans Jazz Fest, took a steamboat ride, ate brunch with live music, and went record shopping. The boat ride made for a memorable evening: “The steamboat had a beautiful [view of the] sunset across the city landscape, and the Dukes of Dixieland played a fantastic set to top off an amazing evening,” said Michael Friedman ‘18. Students also got a chance to learn about the history of the jazz genre with trips to the Jazz Museum, Preservation Hall, and Congo Square. Located within Louis Armstrong Park, the square is considered to be the birthplace of jazz in the city, and Preservation Hall has hosted famous jazz musicians since the ‘60s.

One of the highlights of the week was watching a set in Delfeayo Marsalis’ jazz club, Snug Harbor. Marsalis, a famous trombonist and producer, actually performed a concert in HB’s auditorium this past October, and has taught clinics to Honors Jazz Band students at HB in the past. Although Marsalis wasn’t performing at the club the night the students visited, “it was a very genuine New Orleans experience with incredibly talented and engaging musicians who put on a fantastic show,” said Isaac Wimmer ‘18.

Going to New Orleans Jazz Fest was another highlight for students. This year’s lineup included stars such as Anita Baker, Lionel Richie, and Aerosmith, as well as numerous jazz groups and acts of other genres. Those on the trip saw musicians such as Sturgill Simpson, the Ron Carter Trio, and Donald Harrison Jr. perform during the opening day of the festival. “Jazz Fest was a day of incredible performances by amazing musicians [that] I never would have been able to see live otherwise,” said Friedman. Evan LaFrance ‘20 echoed these sentiments, calling the festival “absolutely incredible.”

In addition to the musical components of the trip, the students made sure to do plenty of sightseeing, including walking around the French Market and Bourbon Street, eating at Cafe Dumont, and going on a swamp boat tour. “We went to the World War II Museum, and it was one of the most interesting places I’ve ever been to,” said LaFrance.

The students had an eye-opening April vacation in ‘Nola thanks to the hard work of HB’s band and choir teachers. “Everything was amazing,” said Friedman, “Umstead and Barbosa did a fantastic job organizing it [the trip] from the ground up.”

From attending Jazz Fest to exploring the French Quarter, it seems as though HB’s student musicians had an incredible time in New Orleans.