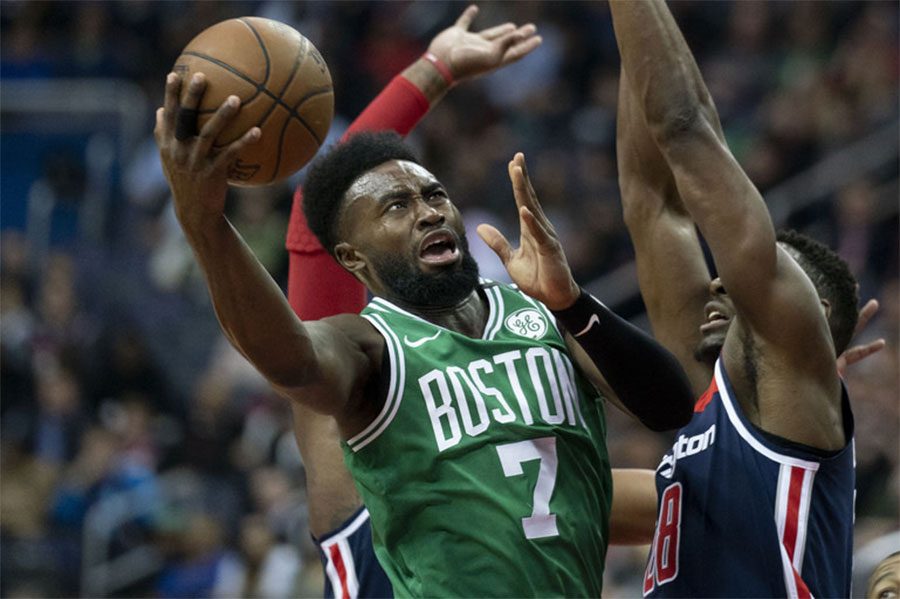 Jaylen Brown takes the ball to the rim through contact in a game against the Wizards. Despite battling injuries, Brown has been a key part of their success. “Jaylen now has two years under his belt and settling in, he has really elevated his level of play” says Michael Moscatelli ‘19.

“Their season is over,” said analyst Charles Barkley on October 17, after the Celtics lost Gordon Hayward to a gruesome ankle injury just five minutes into the first game of the season. Now, as June approaches, the Celtics are facing off against the Cleveland Cavaliers in the Eastern Conference Finals as they continue to defy all odds.

The Celtics entered the playoffs as “underdogs,” despite coming off a successful 55 win season and the second seed in the Eastern Conference. Boston lost all-star point guard Kyrie Irving to knee surgery weeks before the playoffs, which led leading reporters and NBA fans to believe surely they couldn’t make a run missing their two all star players. But if the last few years have told us anything, it’s to never count out coach Brad Stevens and the Boston Celtics.

Facing off against the Milwaukee Bucks in the first round, the Celtics faced an extremely tough matchup against All-Star forward Giannis Antetokounmpo. Both teams battled hard, but Terry Rozier and Al Horford provided some late game heroics to push the Celtics over the Bucks in seven games. Terry Rozier knew there would be doubters, but continued to carry his team. “We’re not worried about what anybody else says. Our mindset is to win,” said Rozier.

In the second round the Celtics faced the Philadelphia 76ers. The Sixers were coming off a blistering end to the regular season where they won 16 straight games, leading to 18 of 21 ESPN reporters to choose Philly over Boston. Led by a flaming hot rookie Jayson Tatum, the Celtics easily won the series in a “gentleman’s sweep,” 4-1.

On May 13, the Celtics opened up the Eastern conference finals with a dominating 25 point victory, sending a message to the league with a 108-83 win over the Cavaliers. Still despite their success, headlines read “Lebron loses” and not “Celtics win.”

Without a defined star, the Celtics young-guns are stepping up and winning games by playing unselfish team basketball. Jaylen Brown and Jayson Tatum have been spectacular, with Tatum averaging 18.6 points including an excellent second round where he strung together seven straight 20 point games. Brown, who has been battling a hamstring injury, has still been efficient and led the Celtics with 23 points in their game 1 victory over the Cavs.

Filling in for Kyrie Irving, Terry Rozier has taken the league by storm and become a leader in the locker room despite being only 24 years old. “Scary Terry is the heart of the team. Terry and Marcus Smart get in opponents heads and make it difficult to play against,” said Kenny Corsetti ‘19. And Al Horford, an All Star during the regular season, has taken his game to another level. Despite getting little recognition, Horford’s value to the team is clear.

But among everything else, Brad Stevens has been the most important part of this team’s success. “Brad Stevens has instilled a sense of confidence in the young players which has allowed them to succeed” said Andrew Elkin ‘19. Stevens was nominated and is the favorite to win the coach of the year, and it is no surprise given the Celtics success despite the injuries.

On May 27th, the Celtics lost game 7 against the Cavaliers, falling one game short of the NBA finals. Despite missing the finals, the team knows they can build of this year and will have high expectations once Irving and Hayward return. Banner 18 is in sight.