Your freedom to read 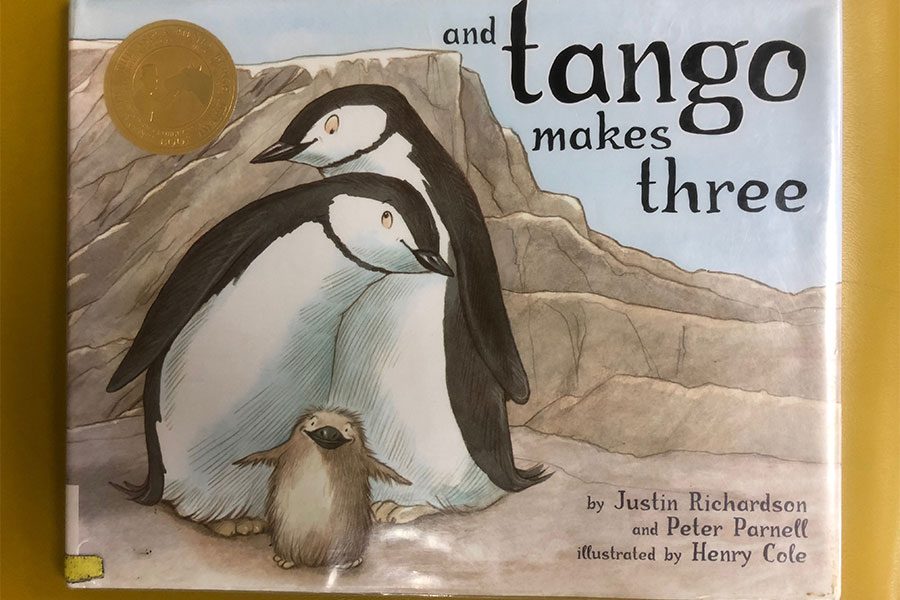 And Tango Makes Three by Justin Richardson and Peter Parnell was one of 2017’s most challenged books, according to the American Library Association. The children's book brought about a significant amount of controversy surrounding LGBTQ issues for several years running since its publication in 2005. “It is important to read things that shake you up. If you are not disturbed by things, you won’t be motivated to learn about them otherwise,” said Bettie Lou Hill.

Libraries across the globe are considered safe havens of knowledge and access points to all of humankind’s greatest, and worst, achievements. However, not all libraries can carry the same material. For example, the Brookline Public Library and the Hollis Brookline High School Library don’t necessarily have the same collection, and in that sense, it is important to know the freedoms of reading and what the curation process is in your libraries.

According to the American Library Association, censoring reading material is not acceptable. However, with due process, books can be challenged and even banned in some states. Nationally, the Freedom to Read Statement says that “Most attempts at suppression rest on a denial of the fundamental premise of democracy: that the ordinary citizen, by exercising critical judgment, will accept the good and reject the bad. The censors, public and private, assume that they should determine what is good and what is bad for their fellow citizens.” In other words, no matter what, the reader has the right to judge what is morally acceptable in books. However, censors, although they may think they are benefitting society, generally do more damage by suppressing the process of democracy.

In the school library, the same rule still applies. Although the collection is carefully curated by Christine Heaton, the school librarian, she will always provide students access to any book they want. “I will enable you to read whatever you want to read, but I will not [necessarily] have it in the library,” said Heaton. In fact, she stressed this idea of the ultimate ability to read any published book by explaining that her curation process may prohibit the library from carrying certain books, but she will never tell a student to stop reading. “I’m not going to look at someone and say, no you can’t read that. But I am going to say no, I’m not going to spend school budget money on something like that,” she said.

Curation itself may seem inherently similar to censorship; however, they are two totally different ways of organizing a library. For example, the Hollis Brookline High School Library is curated, not censored. “Curation is what we do here. We have certain parameters. I have to make sure we have material that is straight up academic stuff for classes, supplementary academic stuff… and then general literacy, just trying to get kids to read. I have to make sure I have material satisfying high school ages, plus staff. That’s where it gets weird,” said Heaton.

At the high school, Heaton has to satisfy a wide range of reading levels while respecting the space limitations and the library’s budget. Therefore, in order to allow her readers to get the most out of the library, Heaton carefully picks and chooses which books to order and which ones should stay on the shelves. Like at any library, Heaton strives to have a diverse collection that offers students a variety of options and viewpoints.

Although a book in Heaton’s library has never been challenged (requested to be removed from the curriculum of the library) in the five years she’s worked at Hollis Brookline High School, before that, several books were. The list includes both The Glass Castle and Nickel and Dimed. Yet despite such requests, Heaton is very impressed with this community’s commitment in their young people’s reading. “This a community that is very invested in literacy for kids and giving them what they want to read,” said Heaton.

Meanwhile, the curation of public libraries varies slightly. Like Hollis Brookline High School, they do have to decide what books are best for each respective age group and label them accordingly. Bettie Lou Hill, Children’s Librarian at the Brookline Public Library in Brookline, says this process is really to help parents and kids figure out what is best for them to read. For example, there are very specific Juvenile Fiction, Young Adult Fiction, Young Adult Biographies, and Easy Reader sections. These areas of the library aren’t limited to people, and while the library may not have a specific book due to space issues, like Heaton, the librarians are always happy to get it to you on interlibrary loan.

While the local libraries and school libraries in this area curate, not censor their materials, it can be important to read and remember the materials that have been censored. Today, thanks to the Freedom to Read Statement, books cannot be nationally banned; instead, they can only be challenged in an attempt to have them removed from specific places. These books, banned for one reason or another, have a tendency to be provocative. “One of the important things about reading banned books, I think, is that it brings up topics of discussion that might not arise in your everyday life. It helps you deal with situations in a safe and non-threatening way,” said Hill.

In fact, society today even celebrates these banned media with Banned Book Week in late September. This week, although not celebrated across the entire country, embodies the idea of the freedom to read a diverse selection of literature. Lorenzo Occhialini ‘20 also feels strongly about the potential censorship of libraries and the importance of banned books. “Keep resources out, but only for appropriateness. Don’t ban anything outright… Libraries should not be filtered. It goes against the nature of a library,” Occhialini said.

Believe it or not, having such freedom to read is not guaranteed in other places across the country. As Heaton mentioned, in some places in the United States, libraries do censor their collections, and librarians are scared to celebrate banned book week in fear of backlash. However, it is the librarians of the public and school libraries that are to thank for protecting the public’s right to read whatever they want. The collections at both Hollis Brookline High School Library and the Brookline Public Library are diverse samplings meant to broaden the horizons of every reader. After all, “for one person, [something] that seems to be scary, negative, or whatever, seems to another person enlightening and educational…We can’t move forward as a society or a culture without trying to take in and process as many world views as possible,” said Heaton.