Games and results for: September 28- October 1 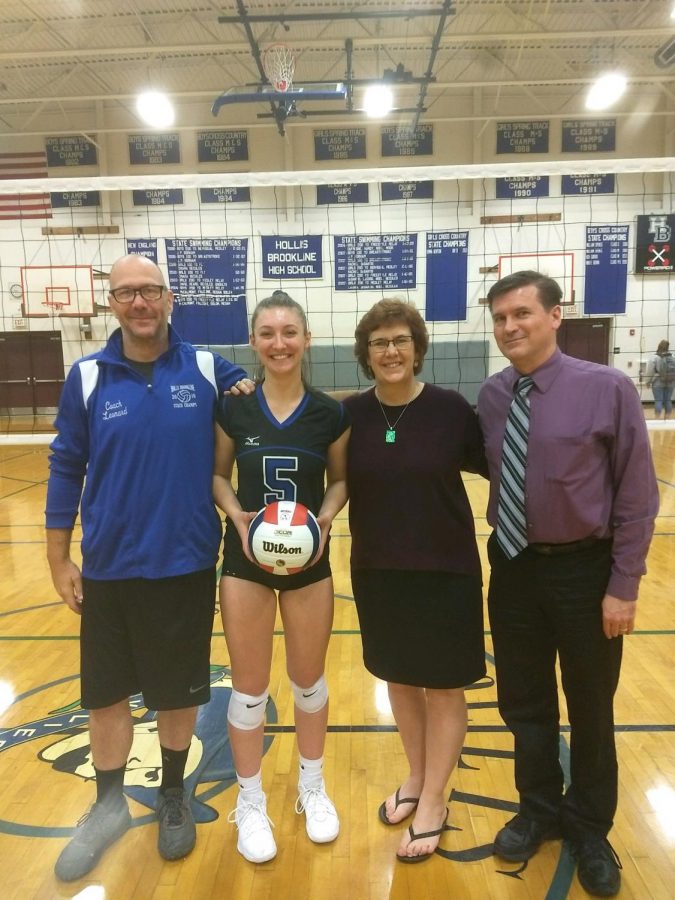 Maddie Norris 6 kills 2 aces, Ashley Burtt 4 kills 2 blocks and Sammie Sheppard 4 aces 14 digs. Special Congratulations to Kyra Belden who notched her 1,000th assist, ending the night with 1001 for her career.
The Golf team went 1-1 with a win over Pembroke(97-61) and a loss to St. Thomas ( 113-97). Top Golfers were Garrett Sturges- 23 points,Aaron brown-22 points, Rory Klauber- 18 points,Grady Sturges- 18 points ,and Matt Dias- 16 points
The Boys Soccer team fell to ConVal ,3-2,in overtime. Tied 0-0 at the half, both teams tallied two goals in the 2nd half. Goals scored by Mark Labak and Joey Dias with both assists from Dale Jacobs.ConVal scored the winning goal 8 minutes into overtime. Ryan Coutu had 13 saves in goal.
The Boys JV soccer team  played a tough Con-Val team on Saturday afternoon and after jumping out to 3-0 lead, suffered a 5-4 loss.  Liam Baldwin opened the scoring off a through pass from Erik Keldsen.  Danny Sattler drilled the second goal on a long pass from Matt Kelley.  Spencer Murray then set up Liam Baldwin for his second goal of the game.  Ram Senthilkumar scored the team’s fourth goal early in the second half.  Con-Val scored the game winning goal late in the half.
The Girls Soccer team improved to with a  homecoming win over Pelham (1-9-1) when Rachel Brackett (1 assist) crossed to Tasha White ( 2 goals) who touched one off a Pelham defender into the net.  Teresa DeMaio ( 1 goal) followed with a 25 yard stunner to the top corner to make it 2-0 at just eight minutes.  Emma Ruvido ( 1 goal) made it 3-0 with a smart 20 yard finish into the low corner at 20 minutes.  White finished the scoring for the day just four minutes into the second half, taking a ball down the left side and ripping another long shot into the far corner.  HB continued with entertaining attack and possession, getting fine contributions throughout the roster.  Maggie Crooks had two saves for HB, as did Izzy LeBlanc with two quick efforts getting off her line in traffic.
The XC team’s  finished 17th in boys while the girls finished 22nd in the 30 team Black Bear Invitational on Saturday. Kenny Corsetti was the top finisher for the Cavaliers with a 27th place finish in the 250 runner field and a time of 17:14. John Kotelly, Matt Hutchinson,  Jake LaBorde, and Nate Sartell were the other scores for Hollis Brookline. Brady Cheyne, Troy Moscatelli, and Hayden Smith had good showings in the JV race. Amy Patallena was the top finisher for the girls in 31st place and a time of 21:02  Kay Partridge, Kierra Dean, Lily Jackson, and Victoria Rezzarday were the other scorers for Hollis Brookline.
The Football team lost to Pelham 43-14 to fall to 3-2 on the season.
The Field Hockey team lost their homecoming game to Oyster River on Saturday with a score of one to five. Minn Danaisawasdi scored HB’s lone goal, assisted by Savannah Murphy. Emma Elkin played well defensively, as did Grace Catalanotti. Devon Kuchta filled in for injured goalkeeper Abbie Fitzgerald, registering 12 saves
GAMES for MONDAY -Oct 1st :
The Jv Football team travels to Pelham, dismissal at 2pm, bus at 2:15pm and game at 4pm at the Pelham town field ( Muldoon Park , 304 Mammoth Rd, Pelham)
The Volleyball team travels to Alvirne, dismissal at 1:15pm , bus at 2pm with matches at 3:30pm – Jv-b . 5:00pm – JvA and 6;15 – Varsity
The Golf team wraps up their regular season on the road at Windham, Dismissal at 1:30pm , bus  at 1:45pm , match at 3:30pm
REMINDERS
This is our week to collect food for the annual Tackles Hunger drive. All week we will accept non-perishable food items in the back lobby as well as the home football game on Friday night. All the food collected will be taken to the Share pantry in Milford to be distributed to needy families. There will be a table in the back lobby to donate your items
Delete Image
Align Left
Align Center
Align Right
Align Left
Align Center
Delete Heading