The Nun; not so scary after all 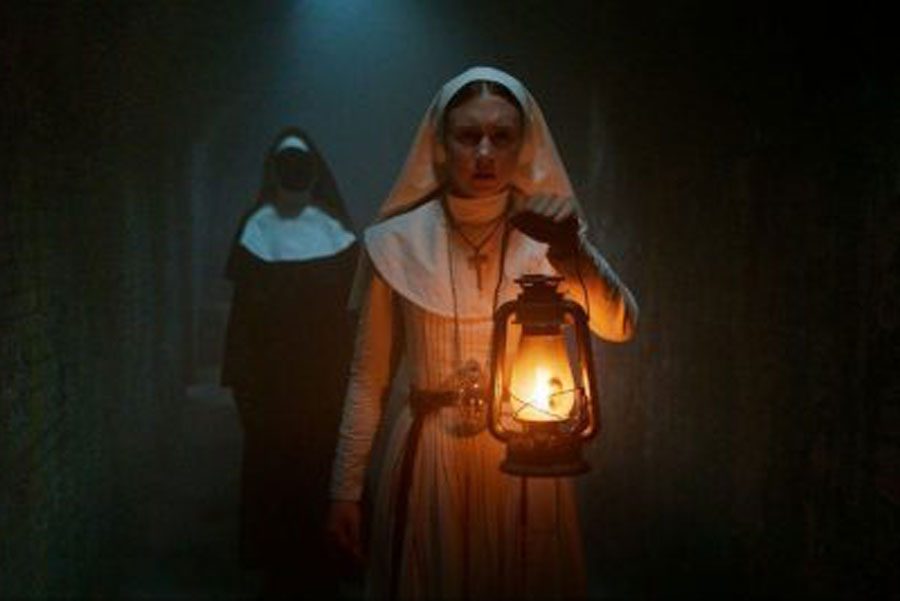 Actress Taissa Farmiga stars in a popular scene from The Nun trailer. The release of trailer brought lots of business to theaters everywhere. “The week it came out there was a lot of excitement over the trailer. People were excited to go see the movie,” said Wood.

The Nun, the latest addition to the Conjuring universe, has hit $131 million in the box office since its release on Sept. 6. Although The Nun was the most successful of any Conjuring films, critics and horror movie fans are now claiming that it doesn’t deserve the fame that it’s received over the past month.

Despite being an avid horror moviegoer, I found myself walking out of the movie theatre sorely disappointed after watching The Nun. Perhaps it was because I had already seen the previous Conjuring prequels, but the movie’s plot felt predictable and flat. Even the trademark Conjuring cliffhanger at the end seemed like a failed attempt to captivate the underwhelmed audience.

Morgan Wright ‘19, a fan of the previous Conjuring films, was excited to watch the newest addition, but wasn’t too impressed with it either. “I found it very boring in the end. The only time I was really terrified was in the beginning when they first flashed the nun’s face. But the longer it went on, [the nun] wasn’t that scary,” said Wright.

It certainly wasn’t the lack of jump scares that caused The Nun’s record low score on Rotten Tomatoes. In between the dull and extensive scenes of the characters’ journeys, there were plenty of random frights that spooked the audience. In many parts of the movie, these little jumps were the only aspect keeping me interested in the plot.

Mackenzie Wood ‘19, another optimistic moviegoer, explained that, “the jump scares definitely get you into the movie, but they only last a second.” Even if flashes of the nun’s backside spike your heart rate for a quick minute, they don’t necessarily make the movie any better.

The constant display of the Nun throughout the movie may have also contributed to the overall flatness of the plot. Justin Chang, a film critic for the Los Angeles Times, explains how a core theme of most horror movies is the fear of the unknown. In the case of The Nun, the ambiguity of the evil nun is important in maintaining fear in the viewers. “‘The Nun,’ shot in murky pools of darkness that often leave you squinting at the screen, is a dispiriting reminder that franchising evil inevitably dissipates its impact,” said Chang.

So why was this controversial film so successful in the box office?

The answer lies in the trailer. After getting about halfway through watching it myself, I was forced to press pause. The trailer seemed to be less of a preview for the movie, and more of a highlight reel of its most terrifying parts. As Wright ‘19 explained, it was no surprise when Youtube was forced to remove the movie trailer from its website just shortly after releasing it.

The trailer, although scary, makes The Nun’s popularity seem understandable. The preview certainly promised a fright, even if it wasn’t executed perfectly throughout the film. For many horror movie fanatics, the prospect of terror is the biggest attraction to getting off the couch and finding their way to the closest theatre.

After watching the movie, the success of The Nun in the box office seems more of a result of its advertisement than of its content. However, I still recommend viewing the The Nun to see what all the excitement and controversy is all about.