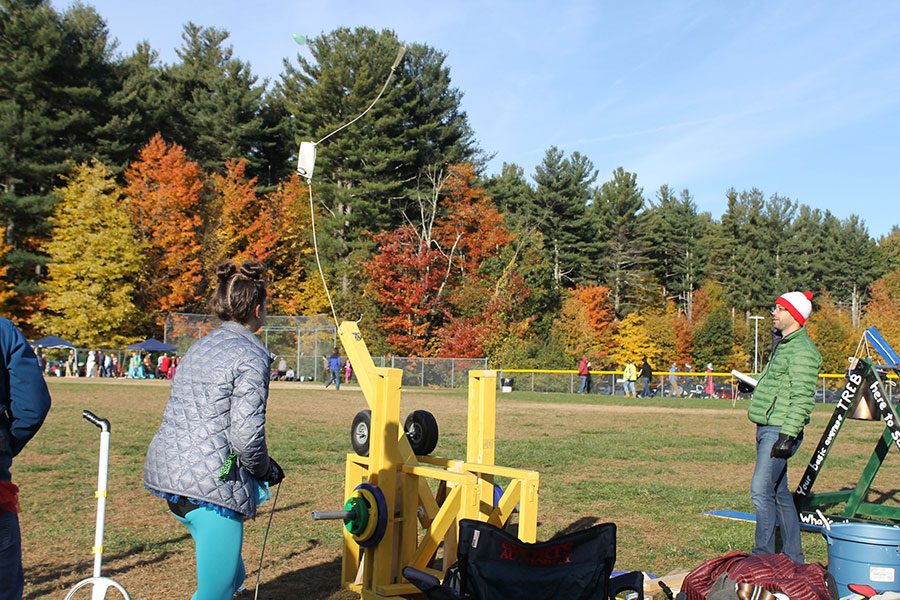 Anastasia Zawadowskiy '20, part of the "SpongeBob" themed treb group, launching their trebuchet. Dressing up gives students a chance to line up a teacher and hit them with a balloon, which is partly why the testing of the trebuchets lines up with the HBHS Halloween Assembly. It’s a “whole day of fun” according to Kramarczyk, who enjoys seeing his friends dress up.

A trebuchet is a type of catapult that uses a sling and pouch, instead of one continuous arm that goes into the payload (water balloon for us)  housing (in our case the pouch which varied from hoods to lacrosse sticks). Trebuchet Day technically allows for catapults, but the majority of students build trebuchets, according to physics teacher, Eric Perry. “Trebs” tend to be more abundant than catapults due to the multitude of variables, like sling length, release angle, or arm length.  the the students can tweak. A weight is attached to the treb’s arm, either on a pendulum or directly, and when the weight is released, it swings down and swings the arm, where the sling and balloon are connected, forwards, launching the balloon.

Treb goes farther back than Mr. Perry does at HBHS, who is in his fourth year teaching physics at Hollis Brookline High School. It’s been happening for “approximately 18 years,” according to Rodney Clark, Head of the Science Department. Treb day has found a home at HB, and it’s easy to see why. The day of physics- filled- fun marks the end of the 2-D Kinematics (the study of motion in x and y directions), and “gives a break from the high tech,” according to Perry. He explained that students could buy something that does the job better than a treb, but that ruins the point. “It really encapsulates what physics is about…collaboration, thinking critically… and group dynamics,” said Perry.

Treb Day isn’t all about creating the most optimal machine to throw a water balloon 30 meters. It’s really about critical thinking, finding unique solutions, and showing how science works in real life to the younger students. Physics 2 student Kaito Kramarczyk’s, ‘19, favorite part of the day is seeing how students “come up with different interpretations” of the same set of directions.

Each group has ups and downs, but working through it is a “life lesson” said Perry. He thinks that “similar schedules” and “starting early” makes or breaks a team. Using the full seven weeks between the assigned date and Treb Day allows for more experimentation and less stress as the deadline approaches. Similar schedules are important as the meetups are frequent, from starting a design and buying materials to building and testing.

Teamwork is not all that makes a treb work though. Patience is key, and a lot of trials, as the goal is a specific 30 meters (98ft) not total distance, explained Andi Lawner, ‘19.  “Sometimes [the water balloon] went back…sometimes it went forwards,” said Lawner. Treb Day is “stressful” according to Kramarczyk. He’s been to treb day twice, and this time he was there to help the other students if need be. It was incredible to see his classmates “stress out, jump for joy..and flip out” when they hit 30 meters, mentioned Kramarczyk.

Getting the treb to work “was cool to see,” said Lawner, especially when you “see [physics] in real life.” But physics students weren’t the only ones enjoying the trebuchets. Each year, HBHS hosts local third grade students from Hollis Primary School and Richard Maghakian Memorial School. One of Kramarczyk’s duties, as an assistant to Treb Day,  included being their tour guide. They “go nuts” for the trebs, according to Kramarczyk.

Treb day will swing back into motion next year on the same day as the Halloween assembly, as per tradition. We’ll see new designs and new problems, but they’ll all be part of the project.