There is no such thing as a blue state 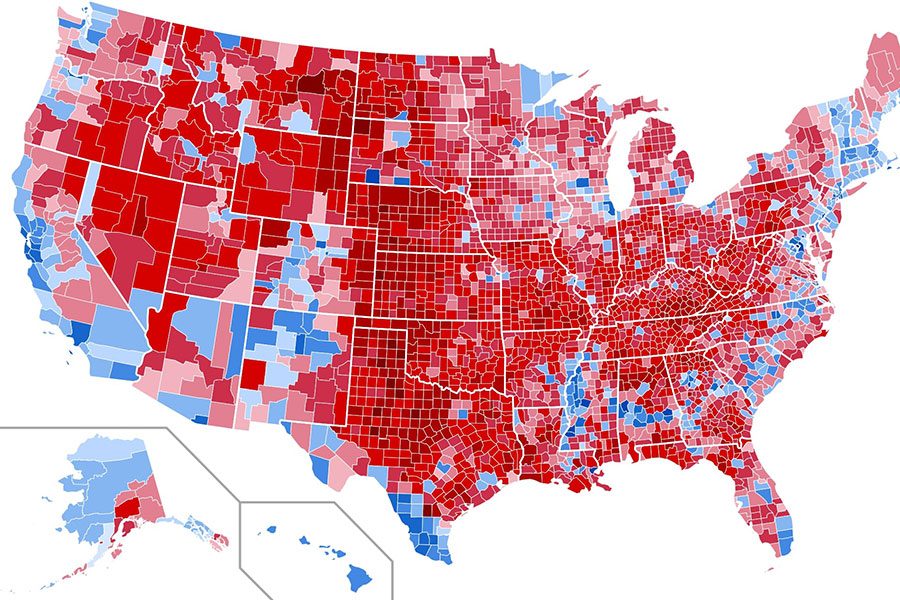 The results of the 2016 presidential election broken down by voting districts. Even at this level, the districts misrepresent voter's intentions.

Political media likes to describe states as “red” or “blue,” but the reality is that most are some shade of purple. Most states are made up of diverse political opinion, regardless of its color on election maps.

Every four years, the analysis of the electoral map is much the same. Commentators divide the country between states that tend to go for the Democratic candidate and those that tend to go for the Republican. For example, California and New York are generally considered safe blue, while the Lone Star state is, traditionally, red. During the unusual events of the 2016 election, victory came down to a few crucial states: Florida, Ohio and Pennsylvania. These states tend to attract lots of attention because candidates win by small margins, and, therefore, it is a viable pick-up for either party. The remaining states, which reliably vote for one party, tend to attract little attention from candidates.

However, delegating a state as red or blue is not an accurate picture of the country. During the 2016 election, three out of ten, or 32%, of Californians, a historically blue population, voted for Trump. Meanwhile, in Texas, the state considered a bastion of conservatism, Clinton received 43% of the vote.

When it comes to electoral majorities, these states may swing reliably one way, but most have large political minorities. One of the distortions of the American political system is that certain states become disproportionately significant in national campaigns. For example, 2016 saw 94% of campaign events held in the most influential 12 states. Once a candidate wins the majority, other votes are largely irrelevant. All but two states in the union grant the winner all the electoral college votes for the state. For example, 2012 Republican Presidential Candidate Mitt Romney won 38.3% of the vote in California. The 2016 presidential candidate, Donald Trump, won just 31.5% of the California vote. In a state of almost 40 million people, 6.8% is quite a lot of people whose votes had little effect in the election.

Even the political divide between rural and urban counties, which is often cited as a growing issue in modern political campaigns, is rather overestimated. In the cities and urban areas for example, 31% of voters are registered republican, while 38% of registered voters in rural areas are democrat. When media and politicians use rhetoric that stresses these geographic divisions, they are wildly misrepresenting reality. However, this misconception is not only represented in the media, but also at the polling place.

It is likely that you, your neighbor, your coworkers, and friends are not politically homogeneous. The current democratic system prioritizes the balance of power between states rather than the will of the people. This is because it was created to hold together a loose confederation of states run by local elites. Its creation by the Founding Fathers occured in an era when each state was an independent organization that could viably be its own country; at this time it was important to ensure all states held significant power. However, today the electoral focus on the state fails to properly represent the will of the voters.

Although the electoral college may feel to the small-state voter like the only way that their voice will be heard, the damage it does to democracy far outways the isolated positives. When the voice of one group advocating for their needs are amplified in congress, it necessarily comes at the expense of other groups. The reality is that today few people identify with state over country, and the time has come to move away from a system that arbitrarily focuses on election at the state level in favor of a more utilitarian system. It is time to orient presidential election around the popular vote rather than the individual states. Considering the perverting nature of the current electoral system, American must ask themselves a question: what matters more, state or country?