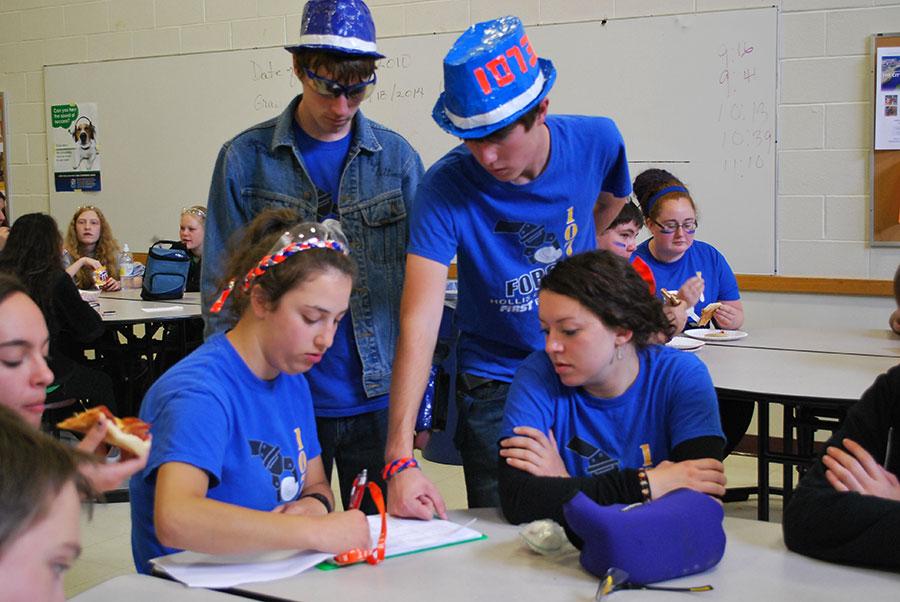 As most people celebrate Halloween with costumes and candy, HB’s FIRST Robotics Team has their own tradition for October’s end. The FORCE Team 1073 spent their day at Goffstown Area High School on Saturday, Oct. 26 for River Rage, an annual Halloween-themed off-season competition. Here, they ended up competing in the elimination rounds and winning Best Team Costume. “We did really well. The rookies had fun and they learned a lot from the competition,” says Connor Liva ‘14, one of the Co-CEOs of the team.

Although the team was defeated by the first seeded alliance during the elimination rounds, the team’s hard work on their costumes consisting of duct tape ties, bow ties, hats, and even some vests is what sealed the deal when they won their award after the long day of competition. “We voted as a team on a costume that everyone on the team would participate in,” says Co-CEO Kate Cherian ‘14. “When it comes down to it, duct tape is a really nerdy thing and the robotics team has really nerdy people.”

Any student involved in FIRST knows to take the titles of “geek” and “nerd” in pride, knowing that it demonstrates what they’ve learned and how they’ve used it to help them during their time on the team.

However, end of River Rage marks a bittersweet time for many veterans on the robotics team. After all, it’s the last time their robot, Ursa Major, will be on the competition field. “It’s too bad we have to retire this robot. This past game was really fun,” says Liva.

Cherian, on the other hand, believes that as much Ursa was a nice robot, she is eager to for the new challenge to be released in Jan. and for build season to come once again. The team will be preparing for kick off soon, and a new robot will be created for the new game.

For the time being, 1073 had an enjoyable off-season that taught its newer members valuable lessons that they can take away and use for when the district competitions begin. As a final thought on River Rage this year, Cherian said, “I’m really proud of how our rookies performed during their first competition.”