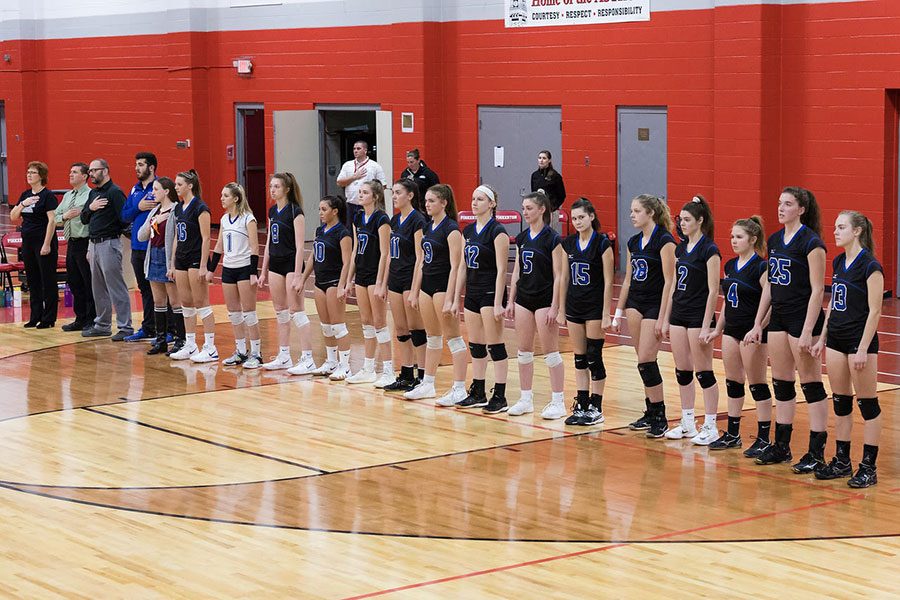 The varsity volleyball team stands united for one of their last games in their high school careers. Looking closely you can see the players linking hands, uniting them before they step out to the court.

It’s a bittersweet ending to the four-year winning streak for the seven seniors on the girl’s varsity volleyball team. Four of these girls have been with the varsity team every year of their high school careers, and have been playing together even before that. Playing with the same girls year after year creates a team chemistry like no other. They have won and lost (though, they mostly won) games together and have grown and matured as people, as well as players.

Kyra Belden ‘19, the starting setter for the team, just recently celebrated 1,000 assists over the years she’s played for Hollis Brookline. During her junior year, Belden made a move down to Florida to pursue an opportunity to play volleyball with other girls who excel at the sport. “Balf [Rebecca Balfour, the head coach of the varsity volleyball team] is a lot more into team bonding and being a family, whereas in Florida, we were all about just winning and not really caring about friendships,” said Belden. And you have to wonder, is that why our girls just can’t stop raking in the wins?

Victories are a huge bonus, but for most of the girls, the big takeaway is the lifelong friendships they have made. Elizabeth Atkinson ‘19 is a right side hitter as well as a captain of the varsity team. “The connection we have [as a team] and the friendships are one of the major things I’ll take away. [The team] has helped me grow so much as a person and a player, I’ve definitely come out of my shell more,” said Atkinson.

Two other talented players on the team are a part of the many seniors that we will be saying farewell to at the end of the year. Maddie Norris ‘19, as well as Natalie Cook ‘19, who were also very valuable assets to the team all four years, will be graduating after this school year. Not only did these girls play to win, but they also played for the enjoyment of the sport and for the feeling of family that overcame them every time they stepped on the court together.

Although not on the team all four years, there are a few more seniors that have still been irreplaceable members; Amanda Elvins ‘19, Ashley Burtt ‘19, and Brodie Kelly ‘19. These girls added many positive aspects to the team dynamic and helped accomplish the fourth straight title win. Whether on the JV or varsity team, our seniors and their contributions to the program will be greatly missed next year.