The problems with Top Ten 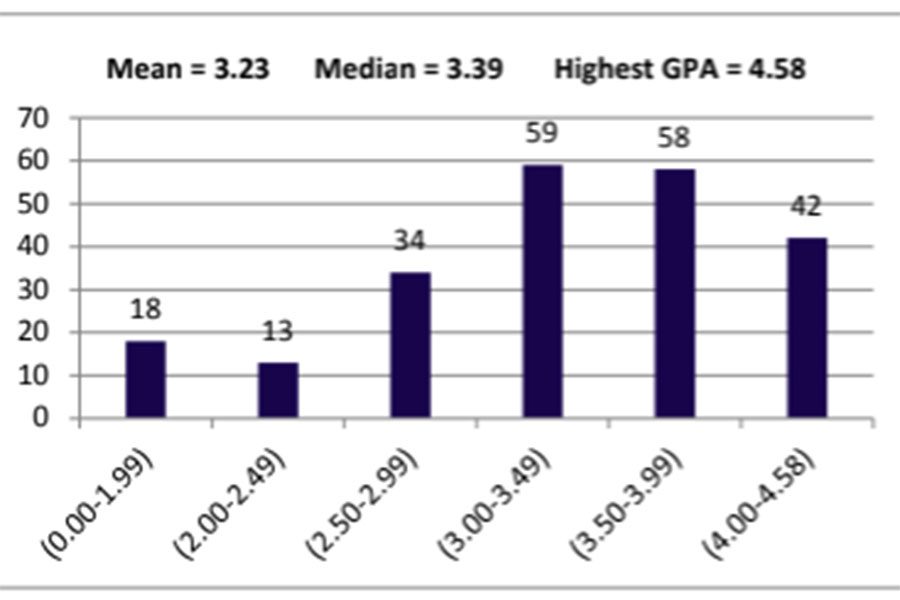 This is the GPA chart for the Class of 2019 on the Hollis Brookline High School School Profile, which is sent to college admissions readers to give context to the information. This chart can give colleges admissions readers a general idea of where a student’s GPA lies in respect to the rest of their class without pitting students against each other through a reported top ten or complete rank. “It makes students who aren’t in top ten feel less than for their grades” said Tess Crooks ‘19.

Hollis Brookline High School prides itself on being one of the best high schools in the state. Between high standardized test scores and competitive college acceptances, one of the great things about the school is the academic excellence of its students. A debate arises when it’s time to give those students credit for their hard work, whether it’s for college applications or for a simple acknowledgment from teachers and peers: should students be ranked by GPA?

Some point out that ranking is necessary for college and to recognize students who have achieved academic excellence throughout high school; some say that it causes stress in students and can hurt students in their college admissions. In October of 2012, HBHS decided to switch from full class ranking to only reporting the top ten students, creating a compromise between the two sides. Even with the very small percentage of students in each class being ranked, the consequences far outweigh the benefits that ranking provides.

Ranking top ten isn’t all bad. It’s a simple way to celebrate academic achievement, which is important. “[Top ten ranking] gives students who have worked hard and taken challenging courses the recognition they deserve,” said Julia Pepin ‘19. Students at HBHS work hard, so acknowledging that effort makes sense. Picking one subset of the class to rank, whether it’s the top ten, top 10% or even top 25%, though, forces HBHS to define what GPAs are seen as exemplary.

By only providing the rankings of the top ten, “it makes students who aren’t in the top ten feel as if they’re less than others [because of] their grades, even though they may have like a .03 lower than someone who’s in the top ten and are still above a 4.0,” said Tess Crooks ‘19. Though having a class rank of 20th on an application may not look the best, it’s the acknowledgment from teachers and peers, whether during the school year or during graduation, that leaves students who aren’t in the top ten feeling left out. No matter what part of the class HBHS chooses to rank, there will always be a cutoff where the 11th or 21st or 51st student would feel like their work isn’t good enough.

Additionally, maintaining or gaining a spot in the top ten can greatly distract students from truly learning and pursuing their passions. When selecting classes, students will shy away from regularly weighted classes that interest them due to the fact that an A+ in that class, a 4.33 added to their GPA, would still bring the overall average down. Taking a class that’s an “easy A” means a student’s GPA may look strong, but the content may not be anything interesting to the student enrolled in the class. Though students will always be looking for ways to have good grades, ranking the top ten only promotes this behavior, giving recognition to students who work to have high numbers attached to their work, but may not have as much true learning and growth attached to it.

On the HBHS School Profile, which is given to colleges along with student transcripts and documents, there is a graph showing the distribution of GPAs of the graduating class (see image at top). Though not as specific and accurate as being provided rank, this data can give colleges an understanding of where a student’s GPA lies in respect to a whole class at HB without having to pit students against one another. If the highest GPA in that chart is a 4.58, and colleges see a 4.5, or a 4.45, they can assume that student is keeping up with the rigor at HBHS and would be ready for college. With this data available, there’s no need to rank students and make them compete for places in the top ten for college applications since the school profile has the information to give context to a student’s GPA.

Colleges that still require rank create a complicated counterargument to removing rank entirely. It wouldn’t be fair for a student to be unable to apply or be accepted to a school just because of a school policy. If HBHS could create a system to request rank to be sent to a college if it is absolutely required, perhaps a similar system to requesting a transcript or recommendation, then rank could be provided but wouldn’t become public knowledge.

It makes sense that HBHS doesn’t report complete rank. Most colleges these days don’t require or even greatly consider rank, with only 15.2% of schools in a National Association of College Admissions Counselors study reporting that they put “considerable importance” to class rank in 2013. Plus, class ranking for students who aren’t in the very top percentage of the class can be harmful. “Our school is so competitive that being number 20 here is like, in a lot of cases, being top five somewhere else,” said Principal Rick Barnes. Providing data to students to put in their applications that could negatively impact their admissions prospects didn’t seem right. This information led to the eventual decision of removing class-wide rank.

No matter what side you may be on, it’s undeniable there are benefits to ranking the top ten students of each class. There are, however, some clear downsides as well, and they overwhelm the good. Not reporting top ten, or at least making it less public, would improve the learning environment at Hollis Brookline High School. Students could focus more on the content they’re learning, not the numbers on their transcripts.