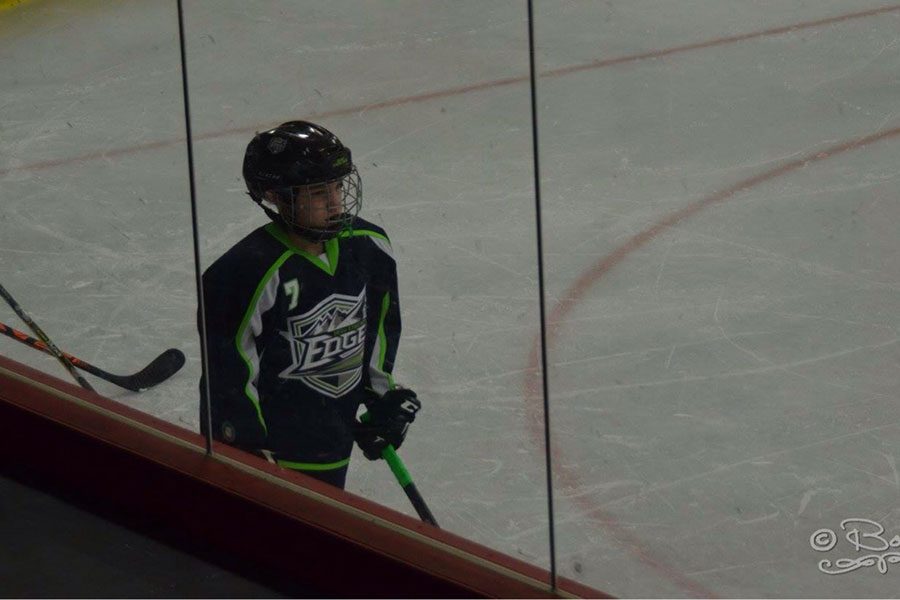 Kelsey Sova ‘22 is focused on playing her game with the New England Edge. Both her, and her teammates, rarely get injured during the season. There are “no checking for for youth players,” says Sova, in order to keep the game safe.

Hockey can appear to be injury prone, but rules and awareness safeguard children. Child hockey players play differently from professionally televised hockey in order to keep them safe. From massive amounts of equipment, training for both coaches and referees, hockey is statistically not as dangerous as other sports.

The resounding agreement across medical professions is that children should be active and that playing on an athletic team is a positive outlet for activity, but does that apply to all sports? And is hockey a safe sport for children to play? The short answer is that yes, hockey is safe, according to Rhon Rupp, HBHS Athletic Director. His claim is supported by a study done by The National Electronic Injury Surveillance System (NEISS), where hockey was rank safer than many other popular sports.

However, many parent forums seem to disagree with these points. One author on Today’s Parent wrote an entire article that can be summed up with the idea that they “hate” being a hockey mom because their son isn’t improving and feels as though the time commitment doesn’t justify being a player. She doesn’t like how he has to practice hard and doesn’t see quantifiable results. Unfortunately, this isn’t a hockey problem, this is a parent problem. In reality, frequent disappointment is a universal sports issue. Another parent on PHDINParenting claims that the “professional hockey leagues glorify violence” and that the players are “paid exorbitant amounts of money to pound the [crap] out of each other while perhaps also trying to get that little puck in the net.” But in recent years, fights are at a historical low. Fighting is on the decline in favor of the faster, better shooting player who is smart on the ice. This reduces the number of fights as players focus more on scoring and winning the game.

At younger levels, this is the case more than ever. Hockey is ranked safer than many other common sports such as soccer, basketball and football, and only two out of 100 children who went to the emergency room, went due to hockey. This is compared to three for soccer, four for baseball and eight for football. In 2012, only 9.4% of the 1.35 million sports-related emergency department visits by youth were hockey related. Baseball players are twice as likely to visit the emergency room because of their sport, and football players were four times as likely.

Even these few injuries are often very minor. “Injuries we do see are actually mild, like bruises, sprains and strains,” says Dr. Michael Stuart, USA Hockey’s chief medical officer and co-director of the Mayo Clinic’s Sports Medicine Center. In contrast, football’s common injuries are much worse, and concussions are high on the list as high school football players have a 75% chance of being concussed.

The way children are introduced into hockey is unique, and is set up to protect young skaters from each other; there is no contact until ages thirteen to fourteen. Hockey even has two levels before children are actually playing in games. For example, USA Hockey has leagues specifically for children and new players learning to skate, as well as another one to learn to play. Graduating these levels usually takes kids about two years, allowing them to hone their skills. This training period lets the players get acclimated to playing on ice and prepares them to play competitively.

The training also improves safety by putting kids on the ice with more experience, and parents notice the result: “I think [hockey] has done a lot to make the game safer,” says Lisa Laverty, mother of an 11-year-old hockey player. Laverty said she would recommend hockey to any parent if their child is interested. She particularly appreciates “[coaches] taking lots of classes…[players] having good equipment…and well-trained refs to keep you safe.”

Even “swimming is only safe if you can swim,” said Kelly Ducharme, HBHS Nurse. Common sense would dictate that you wouldn’t put a kid into the water who can’t swim; they have to learn first. In the same vein, for hockey to be safe, kids need to know how to play safely. “Learn to Skate” and “Learn to Play” get players ready to play hockey, in the same way, you need to learn to swim before racing.

“Equipment” and “rules that keep kids safe,” are advantages that Ducharme, mother of a player, agrees with wholeheartedly. To her, these rules make the sport worth the risk of injury. Body checking, one of the greatest causes of injury in hockey, is not allowed at youth levels. It is not until later in each players career, when they can skate more precisely, that they are allowed to make body checks. This, coupled with the fact that hockey has more padding than any other sport, ensures kids are safe at all times.

One of hockey’s infamous characteristics is fighting, but it isn’t allowed at any level except the professional one. In fact, the Valley Hockey League, our local club league, suspends players one calendar year for fighting if they are between the ages of 15 to 18. If a team has two players suspended for fighting within one season, that team will be suspended from play for the remainder of the season. When players finish playing club and start playing at the high school level, the New Hampshire Interschool Athletic Association (NHIAA), would suspend a team if two players are disqualified for fighting in the same season. The suspension lasts until the Athletic Director or Principal, submits a plan for corrective behavior.

Both these leagues offer heavy consequences for those who engage in fighting to act as a deterrent and to protect kids, but other sports don’t do the same. Many aspects of other sports that are dangerous, are often encouraged. “Soccer has a lot of head injuries,” says Ducharme, which can come from “heading” or hitting the ball with your head.  She says that the most dangerous sports have lots of contacts, with little to no protective equipment.

Playing hockey is not only safe but has great effects on kids across the board. Like any team sport, it “helps to build all those skills you use later on, … A lot of the time, it’s not about you, it’s about the team now, so if you don’t fulfill your part or your role, then you’re letting people down,” says Rupp. Hockey is “good for your health physically, [and]…benefits mental health,” says Ducharme.

Hockey also improves physical health, besides building character and mental health benefits. Since it is an interval sport, where players go from moments of high intensity to rest, it quickly burns calories. It also promotes cardiovascular health through skating, which raises blood pressure, improving health and fat burn. Hockey is considered a “full body workout” which results in stronger “leg muscles, such as the hamstrings, calves and hip flexor muscles… triceps, forearms and shoulder muscles.”

It is easy to see how a casual NHL viewer could see hockey as dangerous. But in reality, youth hockey doesn’t have as many injuries as people may think, and there’s no fighting. It’s safe, fun and aerobically challenging. Kids need outlets for their athleticism and hockey is one of the best. Hockey is currently swinging from the brawlers of the ’80s our parents remember to the skilled game where shooting rules the ice. Games are more focused on winning than ever. Locally, Conway Arena hosts public skating and Learn-to-Skate programs to get started in skating and hockey.