Big splash on the ice 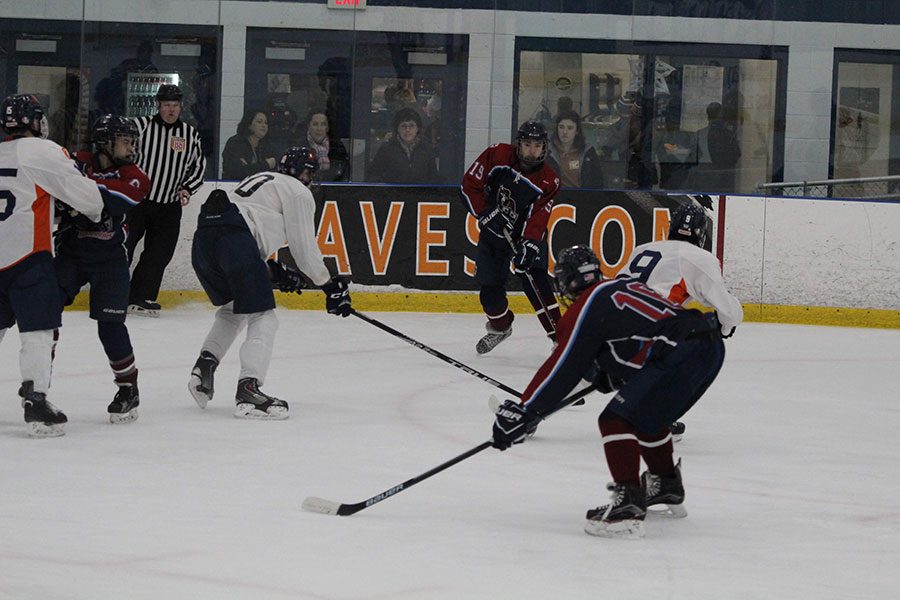 Pictured here is Dylan Terenzoni ‘19 scrambling away from Conval defenders. The HBDS Warriors have seen an improvement in their play this year compared to last, which is evident with their success. “My first three years on the team we had losing records, but this year we are currently 7-4 and tied for fourth place,” said Terenzoni.

The HBDS hockey team has been notoriously underwhelming throughout the past few years, combining for only five wins the past three However, this year seems to be looking up with the current bunch of players turning over the puck.

At the halfway point of this improving season, the HBDS Warriors stand at 7-4, with two of the losses decided by only one goal. Coming off of a two-win season in 2018, HBDS is starting to make some noise and push for a playoff spot in this year’s tournament. Senior hockey starter, Dylan Terenzoni, clearly sees the improvement of this years team compared to prior years. “There is a noticeable increase in chemistry and camaraderie amongst the players,” said Terenzoni ‘19. The increase in chemistry could be the cause for a more successful season for the Warriors. This team isn’t lacking any confidence either: “I can see this team winning a championship,” said Terenzoni.

A major reason for the improved success of this squad is the acquisition of a new head coach, Coach Joel Sanborn. The Nashua Telegraph wrote about how this coaching change has increased the wins for this team, as there seems to be some more energy and better following for the Warriors. Sanborn is helping build the HBDS into a team that will hopefully be successful for a long time to come, as it features many young athletes. This team features the leadership of three seniors but is built off the youth of eight freshmen and six sophomores.

HBDS is trending in the right direction for the future. “Last year we had some talent but weren’t really a team. This year we are playing more as a team and with more intensity,” said Sal Vella ‘21. “We have begun playing smarter hockey and more aggressive on the ice,” said Vella. HBDS is a team ready to win, as long as the team stays healthy and they continue to improve their skills.

Along with helping the team win more games, Terenzoni and the seniors have adopted leadership roles and help prepare the underclassmen for difficulties this year and for the future. One challenge was that “helping the team to come back from our brief losing streak was difficult,” said Terenzoni. However, it seems as though the seniors helped rally the team back to form, as they went on a four-game winning streak after the three-game skid. The underclassmen find these seniors input very beneficial: “the juniors and seniors are great and help show the freshmen what to do,” said Vella.

HBDS hopes to continue this successful season they are having and to eventually make some noise in the playoffs. Their next home game is Saturday, Feb. 9, against Laconia-Winnisquam, where they hope to add to the win column. Home games are held at Conway Arena, so get loud for the HBDS Warriors!