Scott Anneser flips onto the mat 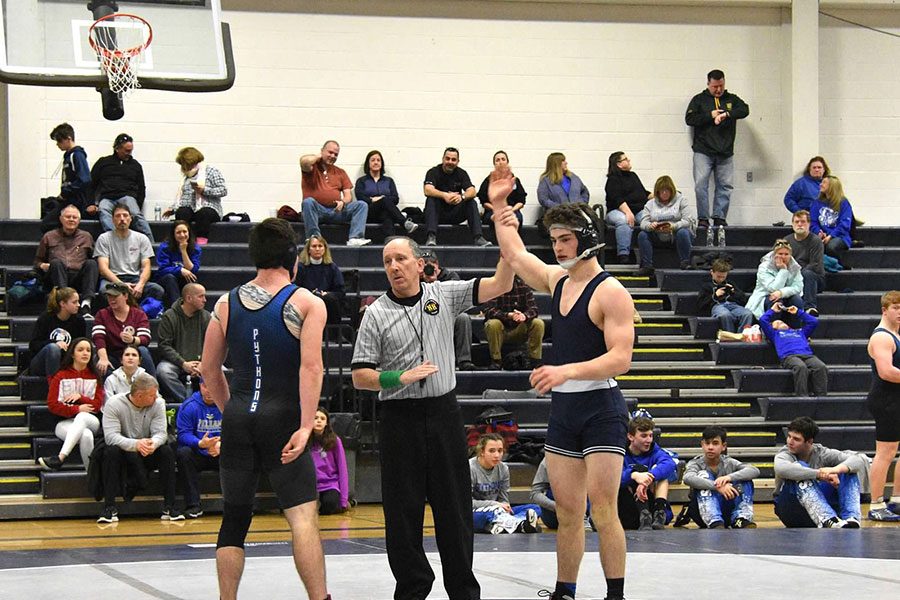 After retiring from gymnastics his freshman year, Scott Anneser ‘19 made the transition to wrestling. Just two years after picking up the sport, he is now one of the top wrestlers in the state. “It’s a long and tough season, but it’s all worth it to get your hand raised at the end of a match,” said Anneser.

Scott Anneser ‘19 is currently thriving on the wrestling mat, with a record of 31-5 for the season. However, flashback three years, and you would see Anneser on the gymnastics floor, where he spent over 10 years of his athletic career. After picking up wrestling late in his teenhood after leaving gymnastics, the odds were stacked against him, but he’s proven everyone wrong.

Most wrestlers start wrestling early in their lives, where, over time, they gain valuable experience: a true benefit in such a technically demanding sport where experimenting with different moves is key. This lack of experience was apparent at first, as Anneser spent his first season trying to learn the sport, while competing against seasoned veterans. “My first year was a lot of learning. The matches were more methodical and controlled than I thought they would be. There’s much more skill involved than I expected,” said Anneser.

But, what Anneser may have lacked in initial technique during his first wrestling season, he made up for with his physical gifts that he carried over from his gymnastics career. He credits gymnastics tremendously for the success he has had. “The strength, flexibility, body awareness, and body control needed in gymnastics all directly translated to wrestling. My skills from gymnastics still help me win matches today, and I wouldn’t be the wrestler I am today without my ‘gym’ background,” said Anneser.

By his second year, however, spectators wouldn’t know Anneser was still relatively new to the sport, and his teammates attested to that. “Scott had an athletic head start from gymnastics, but he quickly picked up the sport and became one of the best take down wrestlers on the team,” said Owen MacMillan ‘19. Zack Brickner ‘19 felt similarly about his growth from year one to two, saying, “[h]e’s improved immensely and has become one of the biggest studs around. His technique has improved significantly.”

Despite a difficult transition, Anneser emphasized how he is adamant that he made the right decision to start wrestling. Part of the difficult transition included getting used to the dieting and reaching his wrestling weight. He admitted it was a challenge to adjust his diet to stay at the right weight. Similarly to how his wrestling techniques improved over time, so did his eating and attention to his weight, an often underappreciated aspect to wrestlers commitment to the sport. “At first it’s tough to stay disciplined with your diet and to track your weight, but after a while, it becomes second nature,” said Anneser.

Anneser continued his successful season on Feb. 16 during the New Hampshire State Meet, where he, after wrestling through three matches against the state’s best, became his weight class’s state champion. In addition, he, along with his teammates, secured the Division II State Championship as a team. Anneser lost only 1 match in his weight class this season, and is looking to continue his hot streak in the Meet of Champions on Feb. 23